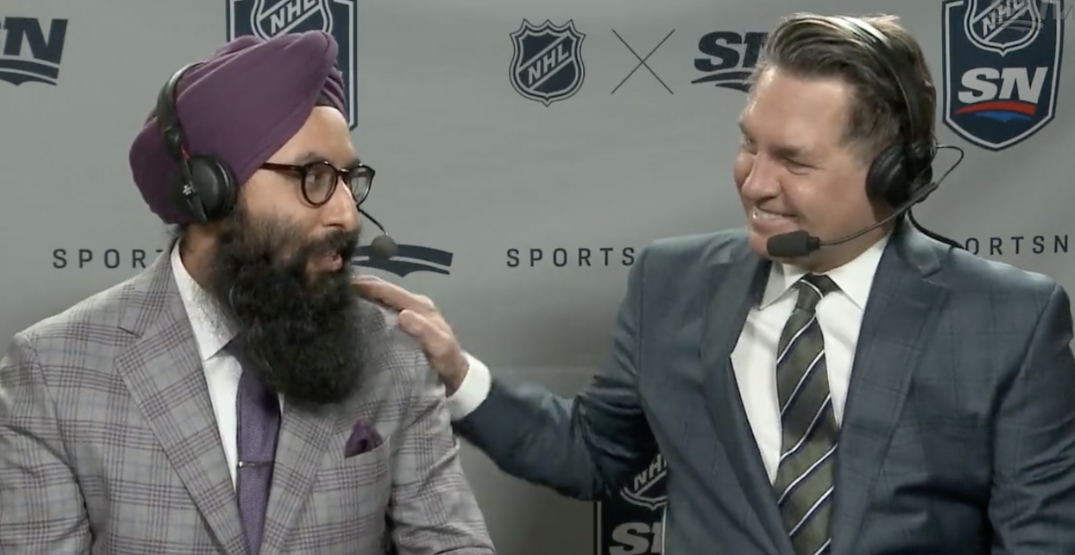 Harnarayan Singh waited a long time before getting the opportunity to broadcast alongside mentor Kelly Hrudey.

Naturally, he made the most of it, and made it memorable in the process.

Calling the Calgary Flames’ 5-1 win against the Minnesota Wild on Tuesday, Singh took a moment to share what his broadcast partner has meant to him, both personally and professionally.

And Hrudey had no idea it was coming.

“No idea. No idea,” Singh told DailyHive on the now-viral segment.

“Kelly was asking (producer) Mark Askin before we’re coming back on air, ‘okay, what are we doing here.’ He said, ‘I just need you to trust me and we’re just going to talk, and you’re going to love it.’

“That’s all he knew. He thought he was going to be pranked.”

I was eagerly awaiting a time for when I’d have the privilege to call a game with @KellyHrudey, who I’ve known for abt 20 years. He has played such a significant role in my journey. Not only a great broadcaster but a gem of a guy who makes the world a better place. Thanks Kelly! https://t.co/G3RU9BfHyn

“It is so meaningful for me, Kelly, to be able to do this broadcast with you,” Singh said on-air prior to the start of the third period. “I’ve known you for a long time. You were at my wedding. You’ve got to bat for me so many times in my career…mentorship, preparation.

“During a time where I was getting mixed messages about the industry, if viewers would be ready for someone like me to come on TV or not, but you were always so encouraging. It means so much for me to be able to do this game. To sit with you and call a game, it’s so special.”

The words caught Hrudey by surprise.

“I’m going to tear up,” Hrudey said. “I thought I was going to get punk’d. I didn’t recognize it was going to be so emotional. It’s my pleasure, Harnarayan. Happy to call you a friend.”

Their friendship, and history, runs deep.

At a time when Singh was seeking advice about initially getting into the industry, Hrudey was always encouraging.

“He didn’t hesitate…where as I was receiving other more cautionary messages from people in the industry, but also people who were teachers in my broadcast school. I don’t blame them, but it was a different world back then and there wasn’t much diversity on TV and radio, let alone sports,” Singh said.

“I was told producing or behind-the-scenes was where I would have more of a chance at success in the industry.

In 2008, with Singh working as a reporter on the news side of CBC in Calgary and with the network looking to expand into more multicultural hockey broadcasting, Hrudey went to bat in suggesting Singh for the role.

Singh began broadcasting on Hockey Night Punjabi in 2009, before becoming the first Sikh Canadian to broadcast an NHL game in English in 2016 and making his Hockey Night in Canada play-by-play debut in 2021.

It hasn’t always been smooth.

Hrudey, naturally, has always been there.

“There’s been times in my career where I didn’t know who to reach out to…difficult times in my career. It was always Kelly who made time for me,” said Singh, now a bestselling author for his book, One Game at a Time. “He met me at Tim Hortons. We went for lunch at an East Indian restaurant in Calgary. He learned what I was going through during very difficult times. Without me asking him to do this, he went to bat for me.

“There was so many moments where he was gracious enough to take the time and gave me such great advice, gave me encouragement.”

That encouragement led, in part, to Hrudey’s surprise Tuesday — the first opportunity the pair has had to work together.

“You’d be hard-pressed to find a better individual, a better human being in our industry than Kelly Hrudey,” said Singh, who typically calls games on Wednesdays and Saturdays while Hrudey — paired almost exclusively with play-by-play caller Rick Ball — spends Saturdays on the Hockey Night in Canada panel.

“His heart is so big. Even lately what he’s done for speaking out about mental health, you can tell the type of person he is. I’m very lucky to have had him in my journey.

“For me to work alongside him as a colleague, someone who I’ve looked up to and someone who has given me guidance about the industry in so many different situations. It was just really special.”