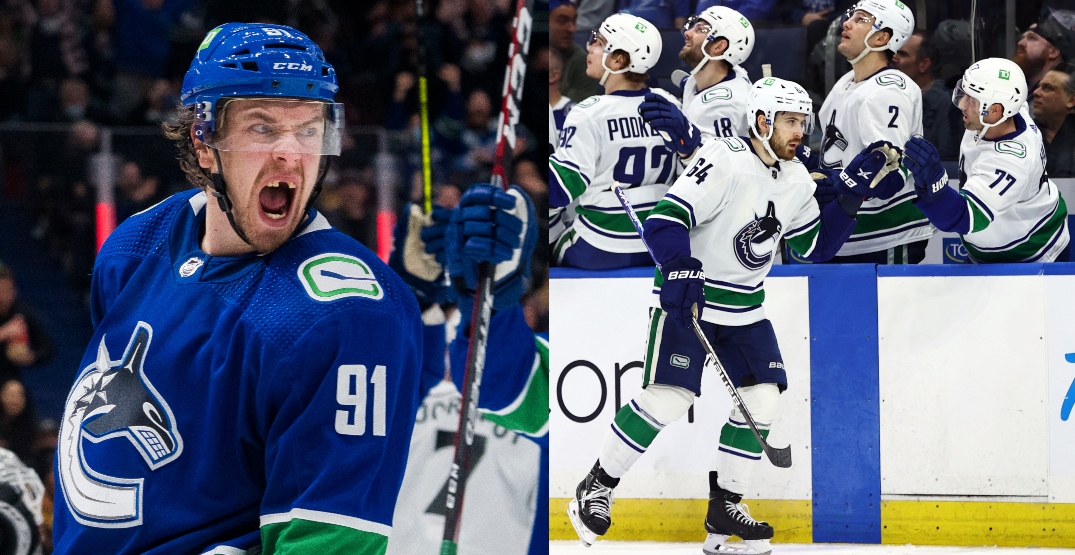 POST AND IN.
Highmore's 1st of the season is a snipe 🎯 pic.twitter.com/mYuM8pwqKX

Since the Canucks traveled south to take on two of the best teams in the NHL, they’ve failed to get any offence from their star players.

In their absence, the fourth liners have stepped up.

During the Canucks last two games against the Florida Panthers and Tampa Bay Lightning, the last three players to find the back of the net were Juho Lammikko, Highmore, and Motte

Those three have now contributed to the scoresheet in three straight games.

Motte’s goal against the Seattle Kraken on January 1, which was set up by Lammikko and Highmore, stood up as the game-winner.

What the numbers say about Canucks’ fourth line

The trio have only spent a few of games together, but the early results are promising.

For a team that has struggled mightily to find capable bottom-six players, that success has to be recognized.

Motte, Highmore, and Lammikko have only spent four games together, playing 31:04 together at even-strength.

So far, the trio has been on the ice for four goals-for and just one against.

That goal against came when Anthony Cirelli scored in the first period on Thursday night.

TONY GIVES THE BOLTS THE LEAD!

A typical goal for Anthony Cirelli as he never gives up and gives the @TBLightning the lead before the end of the 1st! #GoBolts pic.twitter.com/nra8GK7IPY

It was a play where Lammikko could have done a better job of tying up Cirelli in front of the net, although the Lightning centre did a good job of getting the puck off of his stick quickly.

And, it’s hard to complain too much about one shortcoming when the fourth line is producing offence at a first-line rate.

The line’s Corsi-for and scoring chance differential sit exactly at 50%, which should be considered a win for any fourth line.

However, the Canucks fourth line is controlling 68.9% of all shots on goal, outshooting the opposition 20-9 during their time together.

Both moves to acquire Highmore and Lammikko are looking like good moves for the Canucks.

Highmore was acquired from the Chicago Blackhawks in a one-for-one deal, which saw Adam Gaudette sent the other way.

The move was made during Jim Benning’s last trade deadline as general manager of the Canucks.

The trade wasn’t well received at the time. Gaudette was one season removed from registering 33 points in 59 games.

At the time of the deal, Highmore had 10 career points in 73 games.

Since then, both players’ trajectories have moved in opposite directions.

This year, despite missing 24 games due to injury, Highmore has one goal and five points in 12 games.

Gaudette, on the other hand, has seen his stock go in the other direction.

The Ottawa Senators claimed Gaudette off of waivers on November 27. He played two games since then, one being against the Canucks on December 1. Although he scored in that contest, Gaudette was directly responsible for two goals-against in that game.

He’s been a healthy scratch in all but one game since.

Another former Canuck who has frequented the press box is defenceman Olli Juolevi. His situation is more due to circumstance since the Panthers are stacked, although he hasn’t been overly impressive when in the lineup.

Juolevi has played six games. In those contests, he’s been on the ice for one goal-for and five goals-against at even strength.

Lammikko had a bit of a tough start with the Canucks, but the lanky Finnish centre looks revitalized under Bruce Boudreau. He’s played in nine of the 11 games that Boudreau has coached, posting two goals and two assists.

The 26-year-old Motte possesses everything you could ask for in a bottom-six winger. Not only is he fast, tenacious, and a good penalty killer, but he has the ability to chip in offence and move up the lineup if needed.

Motte saw his ice time dip quite a bit during his first few games under Boudreau. That has changed in recent contests.

The Canucks do have a decision to make on Motte this offseason. He’ll be an unrestricted free agent who could get a raise from his $1.225 million cap hit.

President Jim Rutherford and his new management team will soon need to ask themselves how much money they want to spend on bottom-six wingers.

Rutherford did sign Brandon Tanev to a six-year deal worth $3.5 million back in 2019, so there is a track record of dishing out money to bottom-six guys that have had success.