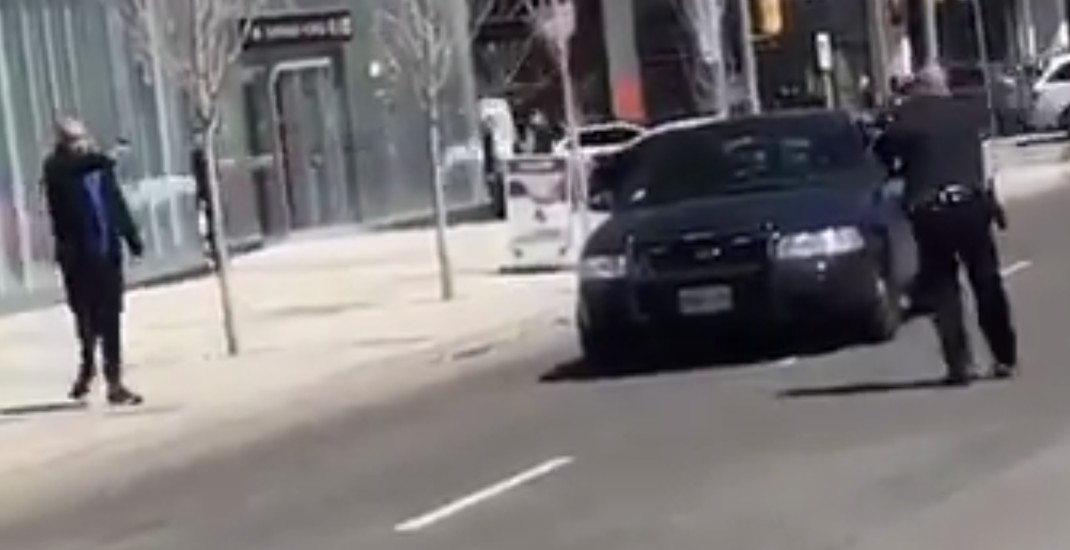 The Toronto police officer who refused to shoot the man responsible for ploughing a van into a crowd of pedestrians is being praised for the peaceful way he handled the situation.

Dramatic video footage of the arrest shows the officer refusing to shoot the suspect —who has been identified as 25-year-old Alek Minassian.

In the intense scene, the officer has his gun drawn as the alleged driver of the van continually tries to force the officer to shoot him, pointing his cell phone at the officer like a gun and then faking as if he’s drawing a gun to shoot the officer. When this does not work the suspect yells, “I have a gun in my pocket.”

The officer remains calm, warning the man to get down or he’ll be shot, to which the suspect responds, “shoot me in the head.”

Video footage of the standoff has gone viral, and the officer has been commended on social media for remaining calm and not using excessive and deadly force — which has often been the case in several police incidents in the US.

Here is the Canadian police officer arresting the suspect in the Toronto attack in North York today-his restraint is nothing short of amazing…now imagine if they were in America. pic.twitter.com/LzVgmj55AS

Hat’s off to the arresting #police #officer in #toronto #northyork . What exemplary conduct! Need more of this on the force #Worldwide ! @TorontoPolice

Just watched a video of a Toronto police officer take down the van driver who plowed down pedestrians without firing a shot. Here in the US they would have riddled him with bullets first, then claim they thought the cell phone was a gun. Our cops could learn from it.

The restraint the Toronto Police Officer showed while the Van driver aggressively mimed quick-drawing a “gun” was breathtaking. #TorontoAttack

I’m in awe of the Canadian police officer who arrested the Toronto driver without shooting him. So brave.

This Police Officer did an outstanding job, nonviolently arresting the driver who killed 10 in Toronto 👏👏

Driver: ‘I’ve got a gun in my pocket’

Police officer apprehends man who killed and injured dozens in #Toronto without firing a shot even when the suspect repeatedly pretended to reach for a gun. Note to US police next time a young black man is carrying a cell phone.

Unbelievable restraint shown by Toronto police officer when van driver “quick drew” his cell phone repeatedly & pointed it at constable. Had this been another country this alleged murderer would have been shot dead! Well done Toronto cops. 🇨🇦#confidence #courage #bravery