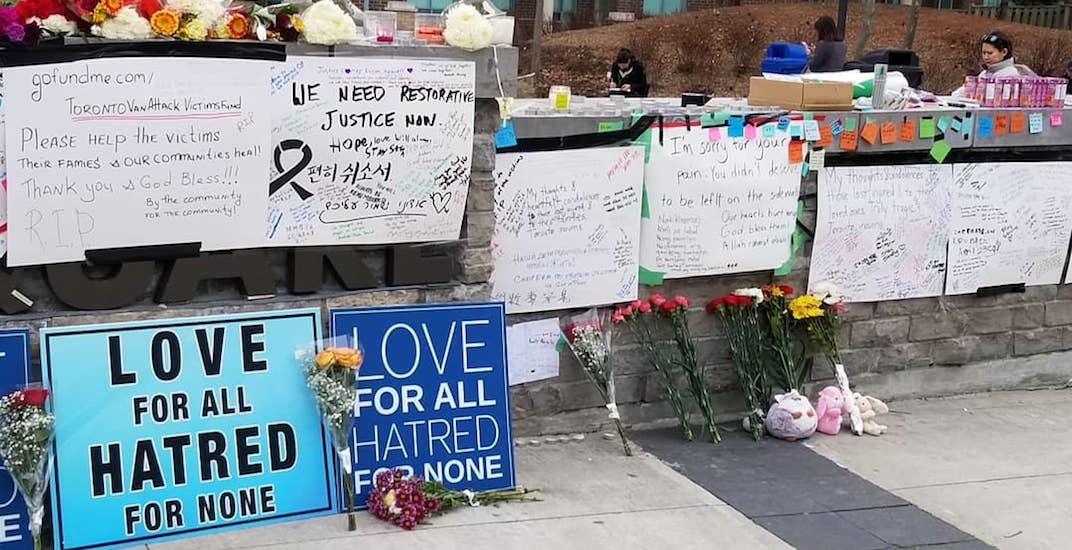 Amidst the shock and sorrow, the city of Toronto is coming together to offer support following the devastating van attack that took place in North Toronto yesterday, claiming the lives of 10 innocent pedestrians and injuring 15 others.

Within hours of the attack, a makeshift memorial had been set up along Yonge Street just steps away from where police tape blocks off the path of the van’s destruction.

Hundreds of Toronto residents have left candles, flowers and messages of support for those who have been affected by the tragedy.

And the support continues to pour in.

Mayor Tory will be visiting the memorial at Olive Square for victims of the tragic attack at Yonge and Finch Tuesday at noon.

It was with great sadness that I heard about the tragic and senseless attack that took place in Toronto this afternoon. On behalf of all Canadians, I offer my heartfelt condolences to the loved ones of those who were killed, and my thoughts for a fast and full recovery to those injured.

I thank the first responders at the scene who managed this extremely difficult situation with courage and professionalism. They faced danger without hesitation, and their efforts no doubt saved lives and prevented further injuries.

We should all feel safe walking in our cities and communities. We are monitoring this situation closely, and will continue working with our law enforcement partners around the country to ensure the safety and security of all Canadians.

Alek Minassian, 25, was arrested shortly after the attack, following a brief sidewalk standoff with a lone police officer.

Minassian, who is from Richmond Hill, has been formally charged with 10 counts of first-degree murder and 13 counts of attempted murder.