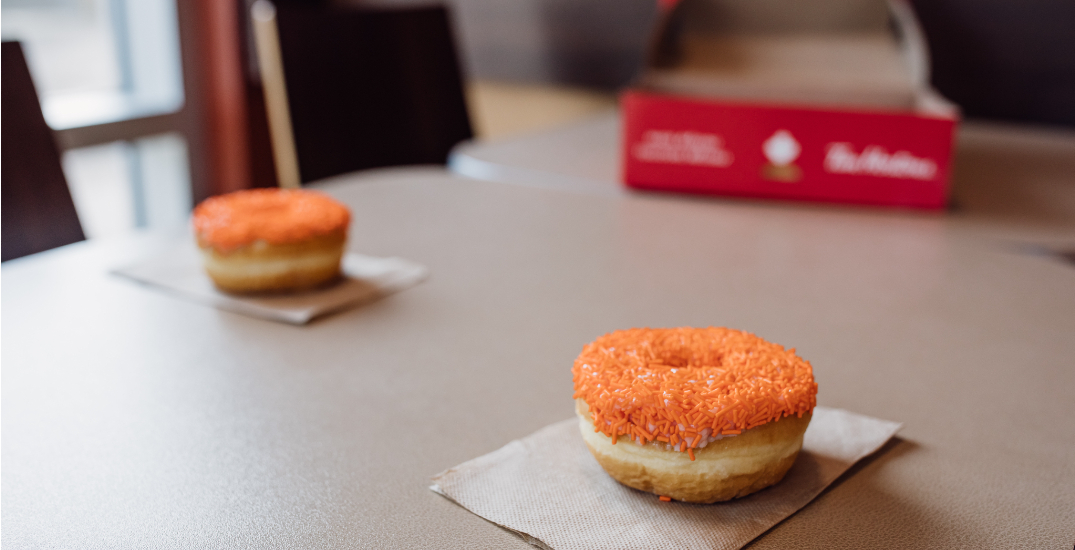 The orange-sprinkled donut will be sold at participating Tim Hortons from September 30 —  the National Day for Truth and Reconciliation as well as Orange Shirt Day — until October 6.

One hundred percent of the proceeds will be donated to the Orange Shirt Society and the Indian Residential School Survivors Society, both of which support Survivors.

In a release, Tim Hortons said the idea was developed in collaboration with a group of Indigenous franchise owners, and after consultations with Indigenous leaders.

Among those leading the charge was Shane Gottfriedson, a former chief of Tk’emlups te Secwepemc First Nation and a former BC regional chief for the Assembly of First Nations.

Gottfriedson co-owns a Tim Hortons that is located near the former Kamloops residential school. In May, the remains of 215 children were found buried on its grounds.

Subsequent searches of other residential schools led to the discovery of more than a thousand additional graves across Canada.

“This initiative will raise some important funds and awareness for two organizations that do crucial work to help support Survivors of the residential school system,” Gottfriedson said.

In the days after the Kamloops discovery, Landon Miller launched his own orange donut campaign at the Tim Hortons he owns on Six Nations of the Grand River territory.

The campaign raised over $5,000, Miller said, noting that he’s excited to see the donut go national.

National Day for Truth and Reconciliation was established by the federal government this past summer. It is intended to commemorate the legacy of the residential school system and honour its Survivors.

Orange Shirt Day has been observed since 2013. It was inspired in part by Phyllis Webstad, a Survivor, whose orange shirt was taken from her on her first day at a residential school.

“The Tims family felt devastated by the horrific news in Kamloops and the subsequent discoveries that were made at other former residential schools,” said CMO Hope Bagozzi.

“We hope Canadians will join us in marking September 30 as a day of reflection and support this campaign through October 6 to help the Orange Shirt Society and the Indian Residential School Survivors Society.”