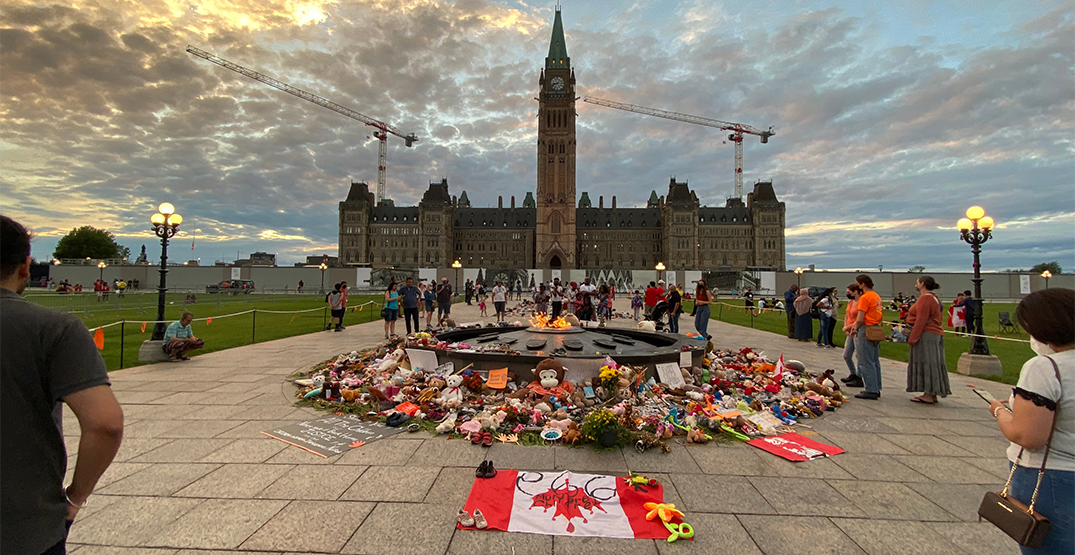 Canada is observing its first Truth and Reconciliation Day on September 30, which has been designated a federal statutory holiday.

Converting the day formerly known as Orange Shirt Day to become a holiday was one of the Truth and Reconciliation Commission’s recommendations in 2015. Its purpose is to make the day one of reflection on the atrocities Canada committed against Indigenous peoples.

Schools across the country will close, and many people will get the day off work with pay — but not all.

Truth and Reconciliation Day is a federal holiday where postal workers, federal government staffers, and bank employees get the day off.

But only three provinces plan to designate the day as a holiday officially. In provinces where September 30 is not a holiday, it’s largely up to employers whether to grant the day off.

Some Indigenous advocates have also suggested that employees who get the day off work on September 30 donate all or part of their wages to Indigenous-focused organizations if they can afford it.

How about on Orange Shirt Day Sept. 30 – National Day for Truth and Reconciliation – those who get a paid holiday (such as federal government employees) donate some of their wages to support Indigenous Organizations? $30 for September 30th? #30on30 #OrangeShirtDay #Reconciliation

Here’s what workers can expect across the country:

BC has not designated September 30 a statutory holiday but has marked it as a day of commemoration.

Several large employers, including the University of British Columbia and the City of Vancouver, have elected to give staff the day off.

The provincial government says many public services will remain open but with reduced hours and that schools, some healthcare offices, and Crown corporations will be closed.

“Over the coming months, the province will work with Indigenous leaders, organizations and communities on the best and most respectful ways to mark Truth and Reconciliation Day here in BC, followed by engagement with business and labour stakeholders for their perspectives on how the national day is commemorated in future years,” the government said in an August news release.

The Alberta government has also not designated September 30 a statutory holiday, leaving the decision on whether workers have the day off up to employers.

The Alberta Union of Public Employees, the province’s largest union, has called on the provincial government to designate it a paid holiday and has reportedly filed a grievance with the province over the issue.

September 30 is not a holiday in Saskatchewan either.

But municipal governments in the province’s three largest cities, Regina, Saskatoon, and St. Alberta, are designating the day as a holiday.

NDP opposition MLA Betty Nippi-Albright has criticized the government for failing to designate the day as a holiday.

“We need to demand September 30, the National Day for Truth and Reconciliation, be recognized by our province,” she tweeted. “This is an opportunity for our provincial government… This is reconciliation.”

Manitoba is one of only three provinces formally recognizing September 30 as a holiday.

Schools will close, and provincially employed workers will have the day off work. Flags on government buildings will also be lowered to half-mast.

“We all have a role to play in reconciliation. We can all listen, learn, and support the healing needed to address the intergenerational trauma caused by the residential school system,” Indigenous Reconciliation and Northern Relations Minister Alan Lagimodiere said in a news release.

September 30 will not be a statutory holiday in Ontario, either.

Like many other provinces, employers may agree to give staff the day off — especially if required in collective agreements.

“Ontario is working in collaboration with Indigenous partners, survivors, and affected families to ensure the respectful commemoration of this day within the province, similar to Remembrance Day,” a government spokesperson for Minister of Indigenous Affairs Greg Rickford told Daily Hive in a statement.

September 30 is not a provincial holiday in Quebec.

The provincial government has not designated Truth and Reconciliation Day a holiday, but city governments in Moncton and Fredericton have chosen to give municipal workers the day off.

Schools, childcare centres, and government offices will be closed. Businesses can choose to stay open, however.

“We encourage all Nova Scotians, whether you are working or in school, to make time on September 30 for important discussions about Canada’s history of residential schools,” Premier Tim Houston said in a news release.

Canada’s smallest province is recognizing Truth and Reconciliation as a holiday and closing schools and government offices.

This fall, the premier plans to amend PEI’s Employment Standards Act to officially recognize September 30 as a provincial statutory holiday for all workers.

“This year has been an exceptionally eye-opening time for Islanders and Canadians alike. We have heard from Indigenous leaders that the findings from unmarked graves at sites across the country have reopened unhealed wounds,” Premier Dennis King said in a news release. “As a nation, provincial and territorial leaders must find a way to work together to support Indigenous peoples through the intergenerational trauma these findings have reignited.”

September 30 has been designated a government holiday but not a statutory holiday in Newfoundland and Labrador, meaning schools and government offices will close, but private sector workplaces can remain open.

Yukon has not designated September 30 as a holiday but says it will work with First Nation and business communities to decide how to mark the day in the future.

Territorial government employees will have this day off, but private sector employees are not entitled to it under the Employment Standards Act. Employers can still choose to give staff the day off.

Truth and Reconciliation Day is not a statutory holiday in Nunavut either.