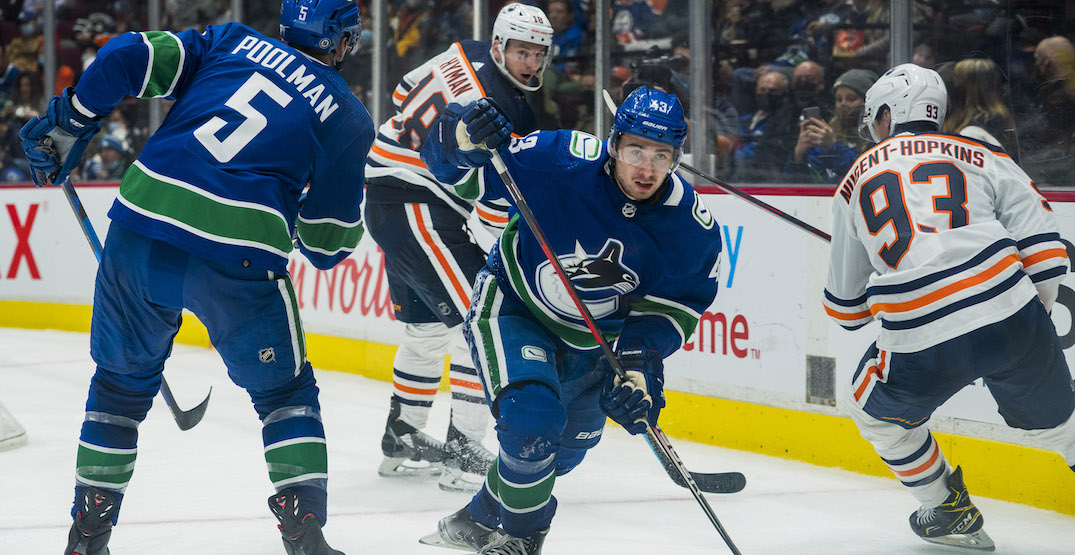 The Vancouver Canucks defence was a good story.

At least, it was at the beginning of the season.

For one of the few times in Jim Benning’s tenure, the Canucks defence wasn’t “bottom of the league” bad.

The D was merely “slightly below average” bad.

Still, when you lose 11 of your last 14 games, something clearly needs to change.

We previously looked at the best suggestions for forward lines using analytics. Let’s do the same for the defence.

The fact that Quinn Hughes and Kyle Burroughs are the Canucks’ best option for a number one pairing says something about the way this defence is constructed.

Both of Hughes’ regular partners – Tucker Poolman and Travis Hamonic – have not played well. Neither are good enough defensively to offset their lack of puck transition skills.

Analytically, the Canucks’ best first pairing would be Hughes and Oliver Ekman-Larsson (55.5 xGF%), but putting those two together isn’t possible without the rest of the defence looking like a hot mess.

That leaves Burroughs, a player who has been a pleasant surprise for the Canucks so far this season, as the best option to play with Hughes. Although Hamonic and Poolman came into the season with bigger roles and higher cap hits, Burroughs has outperformed those two, both at even-strength, on the penalty kill, and analytically alongside Hughes.

Early on in the season, some of Poolman’s positive traits were apparent.

He has good mobility for a defender of his size (6-foot-2, 200 pounds), and his gap control at even strength is fine.

However as the season has progressed, his brutal puck skills are evident, and Poolman is also one of the worst penalty killers in hockey.

At even strength, Poolman has only looked good analytically alongside one defenceman, and that’s Ekman-Larsson. When both defencemen are on the ice, the Canucks have done a good job of limiting chances (1.46 xGA/60). They also haven’t been on the ice together for an even-strength goal against.

One thing you’ll notice on this list is that Hamonic is left without a partner. While the Canucks are unlikely to leave him in the press box when he’s available, they should seriously consider not having both the Manitoba native and Poolman in the lineup at the same time.

Neither defender has played well enough to earn an everyday role, and the Canucks have another seldom-used defenceman who deserves a shot at a regular lineup spot.

The Canucks could use Jack Rathbone’s skill set right now. Again, that says something about roster construction when your team is missing a player with 27 professional hockey games under his belt.

Rathbone and Burroughs looked capable as a third pairing over the Canucks’ first few games, but they were slowly exposed after the first week of the season.

So far this season, Rathbone has spent more than 10 even-strength minutes playing alongside four defenders: Burroughs, Poolman, Luke Schenn, and Tyler Myers. He has a sub-46% xGF with all of these defencemen, aside from Myers.

There is a risk with having two inexperienced defencemen like Rathbone and Burroughs in the lineup. However, as mentioned, it’s not as if veterans like Poolman and Hamonic deserve to have an everyday spot in the lineup.

It’s hard to take much away from the end of the Canucks 2020-21 campaign, but it’s worth noting that Myers and Rathbone showed some capability as a pair last season. Myers was Rathbone’s most common partner in ’20-21, and the two had an expected goals-for of 55.6%. Apart, Rathbone’s xGF was 24.6%, while Myers was at 41.6%.

One of the areas where the Canucks defence struggles most is moving the puck in transition. That’s a calling card of Rathbone’s game, and pairing him with someone he’s shown previous success with would be the most practical way to get him back into the Canucks’ lineup.