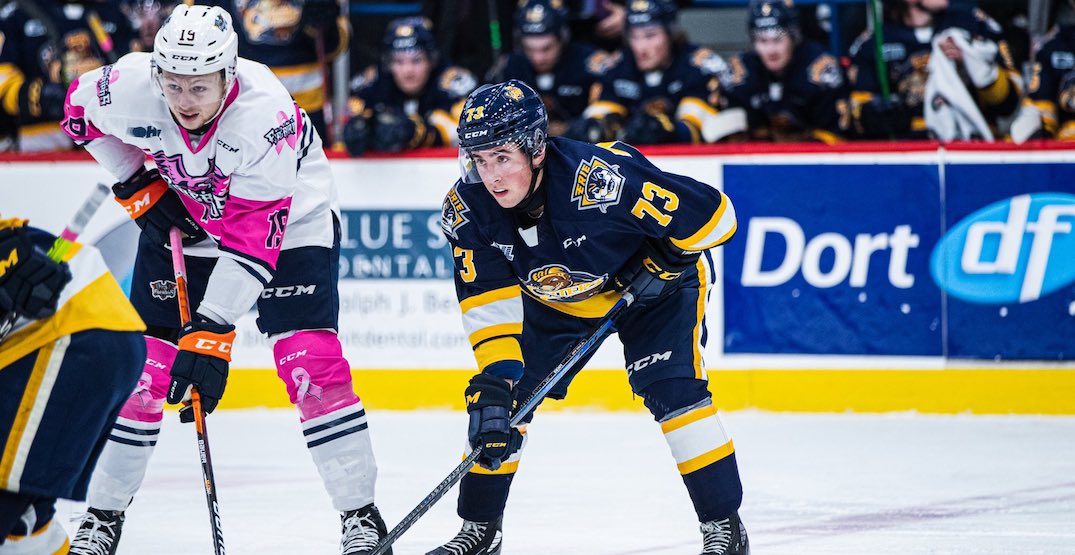 The 2021 NHL Draft was a unique experience in the hockey world, particularly with respect to players from the Ontario Hockey league.

Lacking the top-prospect status that allowed for some OHL players to hop-the-pond and play for European-based teams, Connor Lockhart was one of the many who unfortunately lost an entire season of hockey.

Lockhart wasn’t without acumen though; the Erie Otters forward had an accomplished rookie season in 2019-2020, scoring 27 points in 57 games as a 16-year-old.

Regardless of the missed time, the Vancouver Canucks liked what they saw the year before, selecting Lockhart in the 6th-round of the draft, a pick that was lauded by draft experts in the public sphere for being a high-upside selection late in the draft.

This season, the 18-year-old, is a proverbial lightning-rod player on a Erie Otters team that is in a transitional phase, boasting a roster with the least amount of combined games-played in the OHL, as well as an in-season change on the bench.

A top-six forward on the Otters, Lockhart is currently third in scoring on his team, recording 11 points in 14 games. There are real signs that he could improve as the young season progresses.

What’s probably the most striking part about watching Lockhart play is how dangerous he is attacking off the rush. The diminutive 5-foot-9, 161-pound centre/wing regularly recognizes, hunts, and pressures defenders on his blue line, reading and executing proactive movements to create turnovers or gain an extra step past his opponents. Combine that with some ability to separate, and you have a player who breaks away from the pack like Max Verstappen in Formula 1.

While the Kanata, Ontario-born forward lacks a projectable shot and struggles with some creativity when he handles the puck in small-areas, his instincts are high-end, allowing him to rack up a volume of chances.

Luckily, he is also a fairly skilled passer, who can find teammates against the grain of play, slip passes through sticks and layers of opponents, all while funnelling pucks into high-danger areas in the middle of the ice.

Lockhart is even dangerous off-puck, constantly working and weaving to get into open passing lanes, all while magnetizing defenders and causing chaos in the crease.

With all of these factors considered, and acknowledging his very soft 7% shooting average, upwards-regression should be a present here.

In terms of projectability, it’s hard to say if he will do the same against professional opponents. Lockhart will have to focus on carrying the puck on his hip instead of directly in front of his body — a way to protect and handle pressure easier. Skating advantages diminish as you go up levels as well. Nevertheless, betting on a player who has a high level of hockey sense is usually the way to go.

Lockhart’s game while pushing sustained pressure is a bit of an enigma. He thrives at finding open lanes off-puck while processing developing plays and teammate positioning at lightning-quick speeds.

Conversely, his shooting effectiveness is limited by mechanical errors, overshadowing the great situations his sense gets him into. Lockhart keeps his hands extremely close together, limiting the down-force he can generate with his bottom hand. His shot lacks power and precision, as he leans heavily to the right as he releases. He offsets this inefficiency by being a creative passer in pressure.

Will this mix of processing, chance-producing passing, and poor-shooting mechanics work at a higher level? It should to some degree. If development of his shot occurs, and he continues to push his positive habits, this could create an advantageous mix.

A consequence of missing an entire year of play is that many are finding that OHL players have some holes in their game, delayed in their development. Rusty mistakes, poor-decision making, and missed execution of defensive systems are common themes around the league.

When Lockhart is effective, he is proactive, getting into lanes, and upping his pace of play to pressure vulnerable attackers.

Unfortunately, a lack of scanning leads to poor mental mapping of opponents, causing reactiveness to creep into his play.

This is an area of flux for the entire league, much like a golfer’s performance their first time out after winter — it’s gonna take time. Regardless, we will want to be seeing more of the proactive Lockhart.

With all factors of his game considered, Lockhart represents a value-pick in the 6th round for Vancouver.

Translatability is hard to predict. The majority of effective players who are considered small in today’s NHL are all high-end manipulators through the use of their edges — Lockhart isn’t there yet, but it is early.

Like any late-round pick, he has some deficiencies, but there could be enough here to see him man a third-line scoring role on the wing in the future. A player who pushes play via his sense rather than tools. While his path to professional hockey might be a long one, he will at least be entertaining to watch over the next few years.

We present you with a mic'd up Connor Lockhart! Enjoy!#Canucks pic.twitter.com/f1BxsyndlK