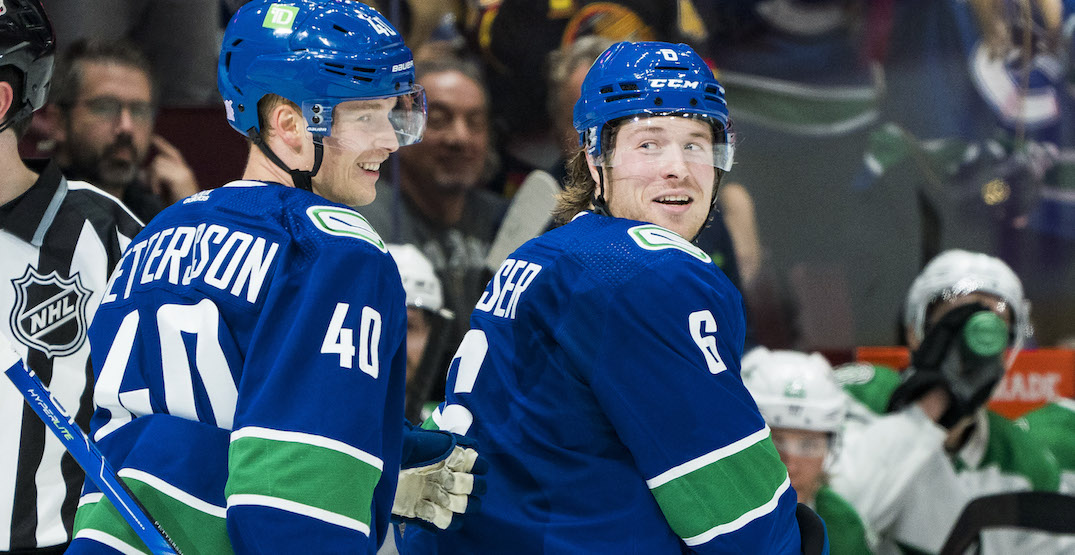 There’s something rotten with the Vancouver Canucks line combinations this season.

The Canucks have stunned the hockey world by icing one of the least effective offensive units in the league. Part of that has been rotten puck luck, but part of the problem stems from Travis Green’s inability to stick with lines that actually work.

For five years now, we’ve seen that the Canucks head coach has an affinity for throwing his lines into a blender. That was a refreshing change from the Willie Desjardins era, where the Canucks former bench boss painstakingly stuck with lines that clearly weren’t working.

However, like most NHL coaches, Green can fall into the same trap.

Take the line of Jason Dickinson, Elias Pettersson, and Brock Boeser, for example. The line is rocking an expected goals-for of 40.9%, and they have generated almost nothing offensively. This has been one of Green’s most commonly used lines during the team’s last five games.

The analytics don’t love that unit. So, which combos do possess solid underlying numbers?

Here are some things to note before getting into it:

The Lotto Line hasn’t found the same magic they possessed in 2019-20, but there are a couple of reasons why they still end up as one of the Canucks’ best combos analytically.

During the Canucks’ last 10 games, the Lotto Line has looked more like the productive line most people expected. They were one of the worst lines in hockey early in the season, rocking an xGF/60 of 29.9% after the team’s first nine games.

That trio has been a bit unlucky as well, as they’ve generated 2.37 goals-for per 60 in the last 10 games, despite having an expected goals for total that sits at 3.15.

The other reason why the Lotto Line nabs the top spot is because neither one of Pettersson or Boeser have found much success away from J.T. Miller. There are only two other combos where the Canucks two star forwards have spent extended time with another winger — with Dickinson (mentioned above) and with Nils Höglander (xGF/60 of 44.4%).

There have been other interesting combos where Pettersson and Boeser have been apart. However, one of them has always been playing with Miller, while the other hasn’t found any sustained success away from the 28-year-old.

Analytically, it looks like the Canucks best course of action is to keep The Lotto Line in tact.

The underlying numbers suggest that the Canucks second line of Bo Horvat, Tanner Pearson, and Nils Höglander has deserved better.

Their defensive numbers are still sparking, which should be applauded based on the fact that they’re still facing the opponent’s best players. However, just two goals in nearly 90 minutes of even strength hockey isn’t good enough for a top-six trio.

This could be another case of some of the Canucks top players suffering through bad puck luck. This line has controlled 63.7% of scoring chances, and their expected goals for of 2.88/60 is more than double their actual goals for total.

Lately, Conor Garland, and Podkolzin have been fun to watch as a duo.

Dickinson hasn’t looked sharp during the beginning of his Canucks career. However, the underlying numbers suggest that a longer stretch alongside Garland and a rapidly improving Podkolzin could be beneficial for the struggling centre.

Both Garland and Podkolzin have spent chunks of time with either Dickinson or Horvat. Interestingly enough, they’ve played more like a low-event checking line alongside Horvat, whereas they’ve been more dangerous offensively with Dickinson.

Statistically, the Canucks’ worst line this season was the trio of Justin Bailey, Juho Lammikko, and Alex Chiasson. The fourth line has looked much more efficient since the return of Tyler Motte though.

They’ve only played together for three games, Lammikko, Motte, and Chiasson have limited chances against and they’ve generated one goal so far in limited minutes. Most of their success came in their first game together against the Colorado Avalanche, where their Corsi-for as a line sat at a sparkling 78.5%.

All you want from a fourth line is to limit chances while contributing occasional offence, and this trio has accomplished that so far.