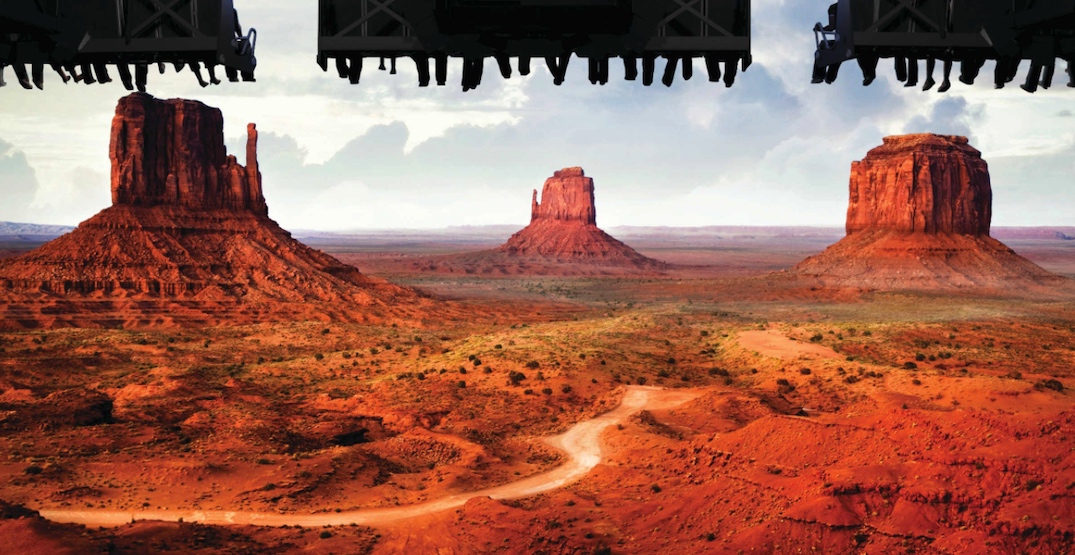 There is a new ride in town at FlyOver Canada at Canada Place in downtown Vancouver, bringing passengers to some of the most iconic locations and natural wonders of the American West.

For a limited time only, the brand new “The Real Wild West” will be premiering at FlyOver Canada starting on November 4, 2021. Expect to be immersed in the best of the natural landscapes of Nevada, Oregon, Washington State, Montana, California, New Mexico, Utah, and Arizona.

“The Real Wild West” was originally made for FlyOver America in Las Vegas, which opened just last month next to Hard Rock Cafe on Las Vegas Boulevard.

The film was shot by award-winning film director Dave Mossop of Whistler-based Sherpas Cinema, who is also behind other FlyOver Canada films including the original Canada film produced for FlyOver’s first attraction in Vancouver.

The original score is composed by Grammy-nominated Tom Holkenborg, whose most recent works include the soundtracks for 2019’s Terminator: Dark Fate, and 2021’s Zack Snyder’s Justice League, Godzilla vs. Kong, and Army of the Dead.

“FlyOver and Pursuit work with top-tier talent on every experience we produce, and this is no exception,” said Lisa Adams, vice president of FlyOver Attractions, in a statement.

“We were thrilled to debut ‘The Real Wild West’ in Las Vegas, and I’m just as excited to introduce the attraction in Vancouver. This experience offers a piece of history, along with must-see attractions south of the border, in an accessible environment that’s close to home.”

This past summer, timed with its reopening, FlyOver Canada showed “Hawaii From Above,” which was originally made for the FlyOver America attraction at the Mall of America in Minnesota.

FlyOver Canada is also currently in the process of being constructed near the base of the CN Tower in downtown Toronto. This attraction is expected to open in 2023.