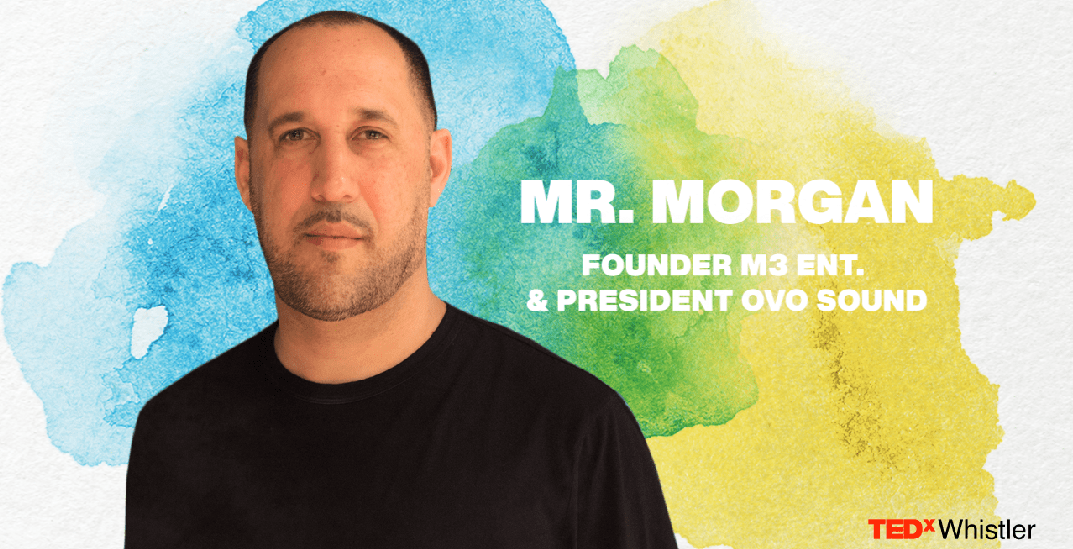 TEDxWhistler is back next month with an incredible list of speakers that you won’t want to miss.

The independently run non-profit TED event is taking place on September 12 and will be interactive and virtual with a hosted livestream. Tickets are on sale now.

TEDxWhistler’s diverse lineup of 10 speakers on a gender-equal stage will explore ideas around the theme of legacy in talks that will each last 18-minutes or less. 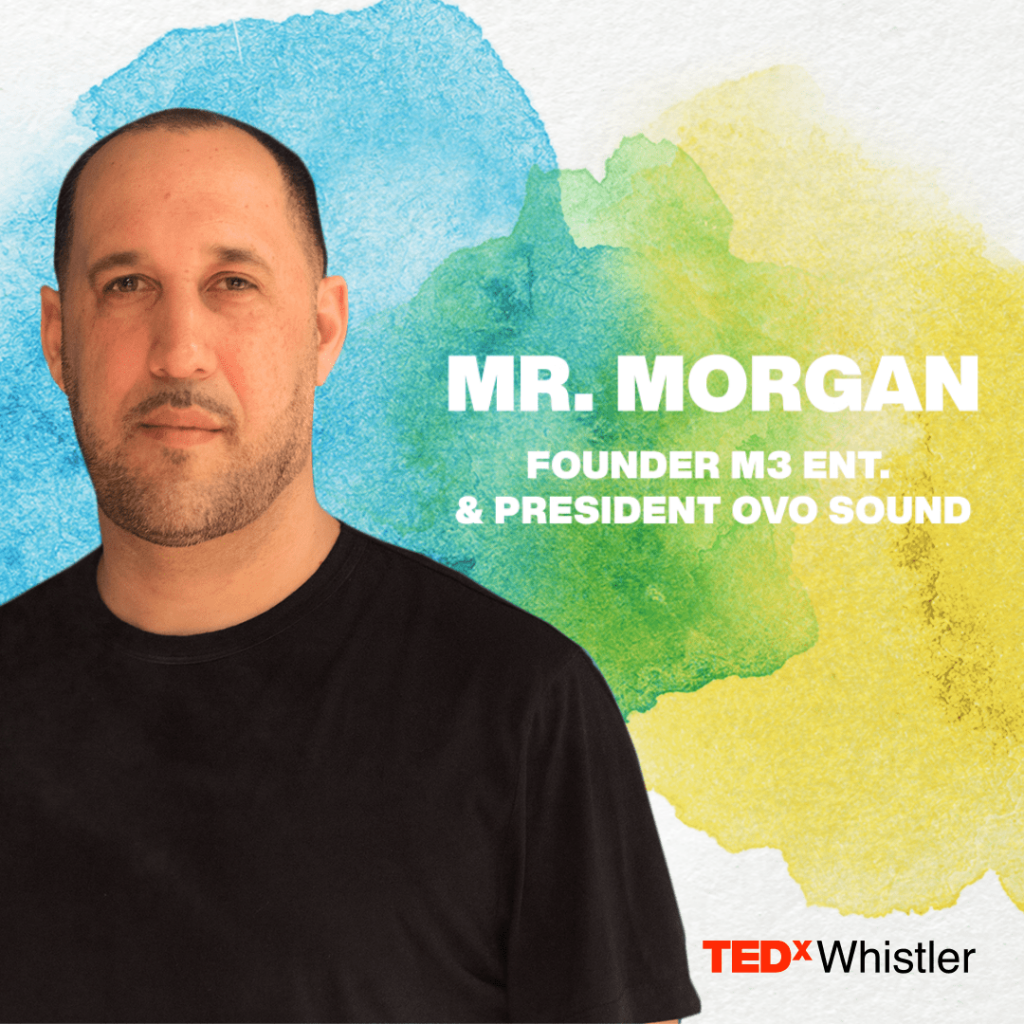 Mr. Morgan is a Toronto native who began his career as a DJ where he picked up the “Mr. Morgan” moniker. He worked for Atlantic Records and became SVP of A&R (artists and repertoire) at RCA Records and Warner Records before helping to launch OVO Sound.

Mr. Morgan also created M3 Entertainment which manages some of the biggest producers in music including Noah “40” Shebib, Supa Dups, Vinylz, and Ninteen85.

“We are truly so honoured that Mr. Morgan is part of our lineup,” said the TEDxWhistler team. “He is creating his own legacy and has been instrumental in launching so many careers. He is an inspiration to young artists and extremely respected in the industry and we are delighted to share his story.”

Here’s the complete list of speakers who will be speaking at TEDxWhistler 2021:

Douglas has lived in Whistler for 30 years and is considered to be one of the most influential skiers of all time. He has appeared in more than 50 ski films, was named Powder Magazine’s “Male Skier Of The Year” in 2003, and was the voice of skiing at the X Games for 14 years. Douglas produces and directs films and commercials at Switchback Entertainment, is an environmental advocate for Protect Our Winters Canada, and is credited with the design of the modern twin–tip ski, an innovation that revolutionized the sport.

Crompton has a long family history in Whistler. His grandparents were original shareholders in the Garibaldi Lift Company and the Cromptons have been involved in business and community organizations since the start. Crompton has been Mayor of Whistler since 2018 and is fascinated by political history, local government and international affairs.

George is an accomplished weaver and teacher from the Squamish Nation. She is co-founder of L’hen Awtxw Weaving House which shares the teachings and practice of traditional Coast Salish wool weaving alongside fellow weaver and teacher Skwetsimeltxw Willard “Buddy” Joseph. George co-organized the 1st Canada Northwest Coast Weavers Gathering with other Squamish Nation Weavers. She along with acclaimed weavers Debra Sparrow and Angela George created Blanketing the City IV for Vancouver Mural Fest 2021.

Gélpcal was born in Sk̲wx̲wú7mesh (Squamish) and is a citizen of the Lil’wat Nation (Mount Currie). His roots are gathered from Tsal’alh (Seton Lake), home of his mother Xí7tsa7, and Lil’wat, home of his father Saw’. Gélpcal is a multi-medium artist who specializes in carving wood and soapstone, acrylic painting, pine needle basketry, and pyrography. He also enjoys fishing and harvesting medicine, tea, berries, pine mushrooms, and other food from the land.

Jon Montgomery brought home gold in skeleton at the 2010 Winter Olympics. His memorable victory walk through Whistler Village while enjoying a golden pitcher of beer presented to him by a fan gave Jon instant folk-hero status with Canadians across the country. Since then, Jon has appeared on Oprah, co-hosted the JUNO Awards, and has hosted The Amazing Race Canada since 2013.

Kausky travels as a physician with the Canadian National Alpine Ski Team and is Medical Director of the Canadian National Ski Cross Team. She graduated with an MD from the University of Toronto and completed her Family Practice residency at the University of Western Ontario, obtaining certification from the Canadian College of Family Physicians. Kausky has practiced full-service family practice in Whistler since 1993 and was the Chief Medical Officer for Women’s Alpine Events at the 2010 Winter Games. She is co-chair of the Sea to Sky Division of Family Practice.

Lewis has combined her training as an emergency physician with expertise in mountain search and rescue for over 20 years. She also works as a guide, instructor, safety consultant and medical advisor for the tourism, guiding, aviation, and film industries. Whistler-based Lewis has appeared onscreen as a field doctor for reality television, a rescuer in outdoor commercials, and as a high-flying stunt woman.

Harris is Founder and Creative Director of Jillian Harris Design and The Jilly Academy, Co-Author of Fraiche Food Full Hearts and Co-Founder of The Jilly Box. The former co-host of HGTV’s Love It Or List It Vancouver loves bringing her designs to life through fresh and inspiring refreshes to homes needing love. Harris also works with local charities to help those in need and give back to those less fortunate.

Yeung is the author of the book The Eighty Year Rule: What Would You Regret Not Doing in Your Lifetime? and holds a position as Adjunct Faculty at the Justice Institute of British Columbia. She earned her Juris Doctor degree (Doctor of Law) from UBC and was called to the BC Bar in 1989. Yeung is also a Whole Person Certified Coach and Certified Emotional Intelligence Trainer and owns her own coaching business.

Newton is a Jessie Richardson Award winner for Outstanding Performance by an Actor, as well as a nomination for Best Direction. His original Hip Hop theatre piece Sal Capone has received critical acclaim and multiple productions, including a recent presentation at Canada’s National Arts Centre. Newton can be seen most recently as Nate on Corner Gas Animated as well as Corvus in Netflix’s hit animated series The Dragon Prince.