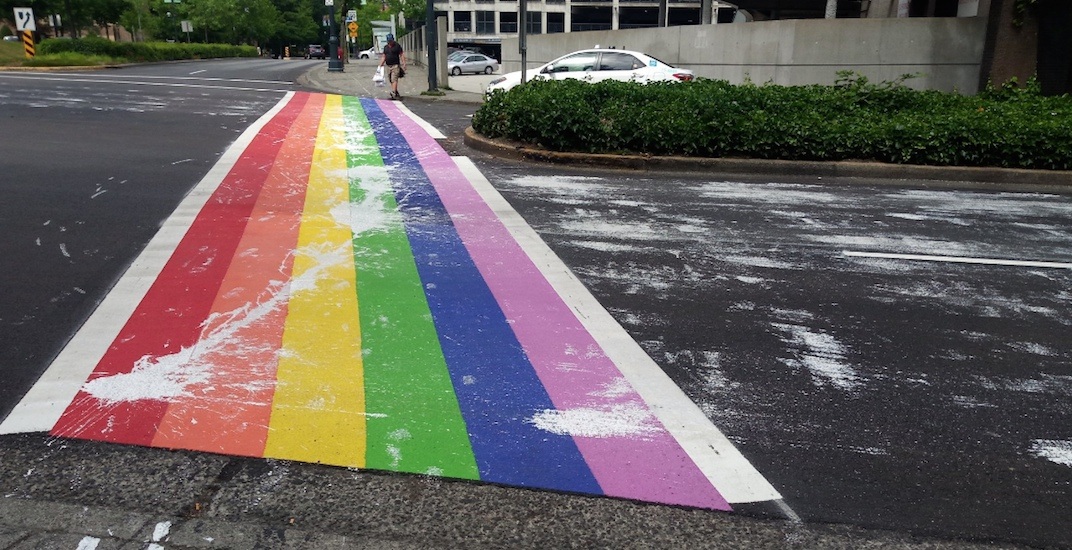 Within less than a week, the brand new rainbow crosswalk next to Holland Park in Surrey has already been damaged in an apparent act of vandalism.

Someone splattered white paint all across the brand new colourful crosswalk at the intersection of Old Yale Road and University Drive. Ginger Gervais, who captured a photo of the damage, says the paint was still fresh when she was passing through the area earlier this afternoon.

The crosswalk, painted earlier this month for Pride Month, was funded by the City of Surrey to show its support for the LGBTQ community.

It cost $8,500 to paint and was supposed to have a five-year lifespan, but with the damage crews will certainly now have to make some unscheduled repairs.

This is not the first time there has been an act of vandalism on an LGBTQ rainbow crosswalk in Metro Vancouver. In fact, in both other cases, the crosswalks were also damaged soon after completion.

In 2015, a 91-year-old man was investigated after witnesses saw him pour white paint over the new crosswalk in downtown New Westminster. And just last year, someone used their car to create dark skid marks on the crosswalk in Fort Langley.

Other rainbow crosswalks in the region are located in downtown Vancouver and Coquitlam.

Daily Hive has reached out to the Surrey Mayor’s Office for comment.