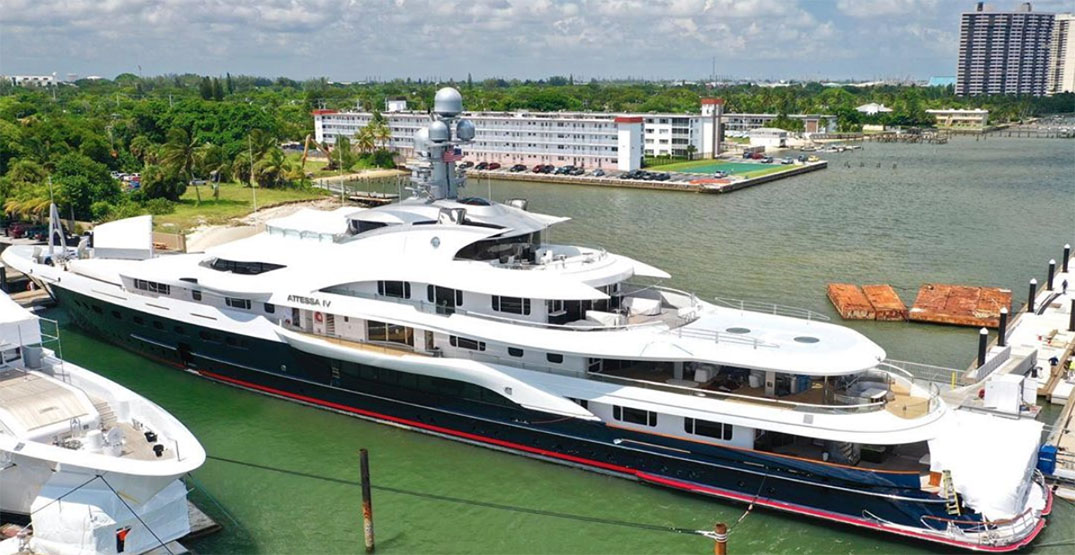 A massive superyacht belonging to a US billionaire has docked at a North Vancouver shipyards for repairs during the COVID-19 pandemic, a trip the ship’s owners say was “essential.”

The 100-metre long Attessa IV arrived in Canada from Port Angeles, Washington on June 30 after receiving clearance from the Canada Border Services Agency, according to Tim McHugh, executive vice president with The Washington Companies.

“It will remain dockside until likely the end of September when the repairs are expected to be complete,” he said.

The boat is owned by Montana businessman Dennis Washington, who owns majority stake in a collection of corporations known as the Washington Companies. He also owns the Canadian group of companies known as Seaspan.

Washington is known to have a passion for remodelling yachts. The Attessa IV was created from the hull of another yacht known as the Evergreen, and the skilled renovation received attention from the yachting community. The boat currently sails under the Cayman Islands flag.

McHugh said that all the yacht’s crew members were tested for coronavirus prior to boarding, and they were all tested again on June 19 and declared healthy.

“Each have been individually cleared by CBSA for entry to Canada with the ship to perform their duties during the repair period,” he said.

CBSA spokesperson Judith Gadbois-St-Cyr said she couldn’t comment on specific cases, but said the agency monitors all ports of entry — land, sea, and air — and enforces coronavirus restrictions now that the US-Canada border is closed to non-essential travel.

Even though the border is closed, all Canadian citizens are still allowed through.

International arrivals must self-isolate for 14 days, Gadbois-St-Cyr said. But there are exceptions, including workers involved in essential services, economic supply chains, and critical infrastructure projects.

Healthy people who have to cross the border to commute to work are also except from mandatory isolation if they are asymptomatic.

Finally, workers who are critical to Canada’s economy and infrastructure such as truck drivers, firefighter, and medical workers will still be allowed through, Gadbois-St-Cyr said.

Editor’s note: An earlier version of this story incorrectly stated the Attessa IV was 100 feet long. The yacht is in fact 100 metres long.