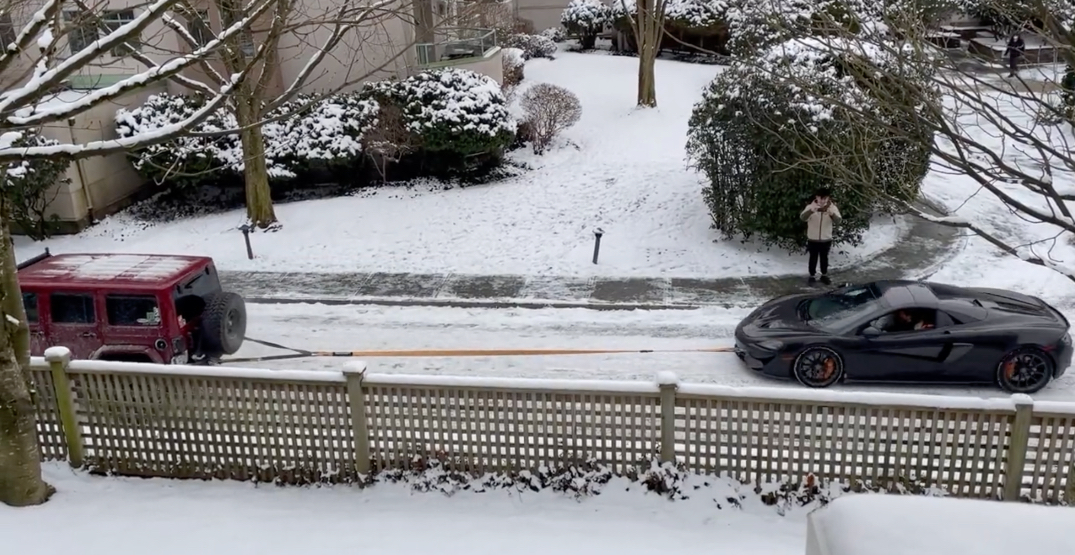 When it snows in Vancouver, some are a bit unprepared to handle the ice and the chill.

Videos posted to social media show looks like a supercar in Vancouver struggling – to put it mildly – out in the snowy streets.

It’s drifting, but not intentionally.

Update. The asshole in the Lamborghini called his friend with the luxury off-road SUV to come and pull him out of the driveway, to god knows where. #BCStorm pic.twitter.com/Tk11Q1IGdL

In the video, the car’s top is down. Vancouver has been experiencing an arctic outflow weather event bringing temperatures down to well below zero with windchill making it feel like up to -20 C.

According to the tweet, the vehicle had no winter tires and was trying for 30 minutes to navigate an icy driveway.

A second video shows the car getting dragged up the driveway by another vehicle.

The videos are gaining more traction than the supercar. The first video has nearly 35,000 views and the second has more than 16,000 views. Both elicited strong responses from the community.

Safer for everyone else that a driver like that is stuck in the driveway.

“Safer for everyone else that a driver like that is stuck in the driveway,” wrote one Twitter user.

“It’s freezing out there and they have the top down!!!” wrote another.

BC has winter tire regulations in effect. Drivers in the Lower Mainland are responsible for ensuring their vehicles are equipped for the conditions.

Typically, drivers in Vancouver use M+S tires year-round or change to winter tires in the event of snow. You can learn more about driving conditions in BC and the rules at Drive BC.

Daily Hive has reached out to the video poster and the Vancouver Police Department and will update this story.