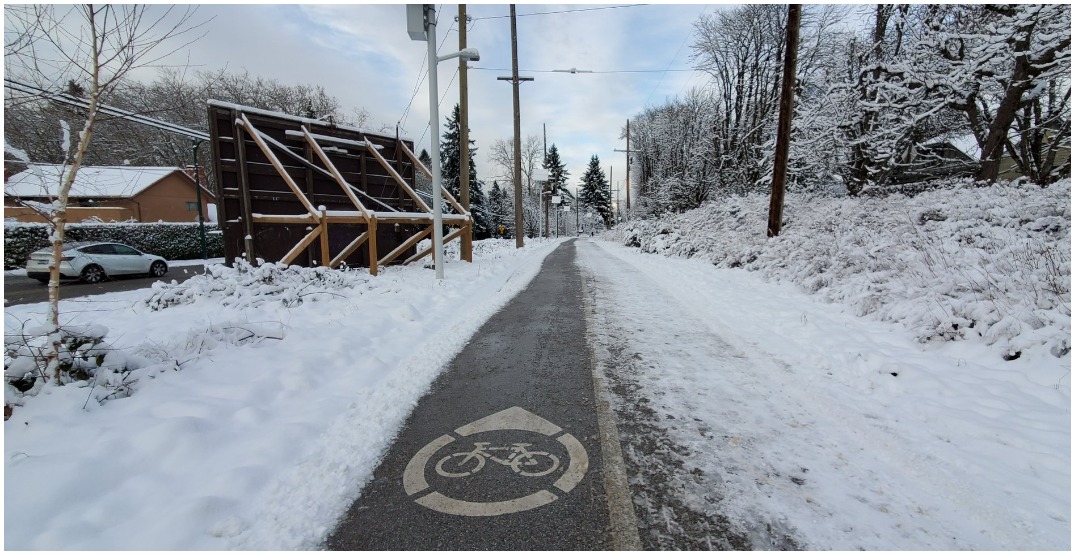 If you’ve been on social media the last couple of days, there has been a lot of debate over why priority bike lanes were cleared of snow while pedestrian walkways were left untouched.

According to Vancouver City Councillor, Sarah Kirby-Yung, there was a gap in implementing a directive from council.

Kirby-Yung says she’s been told that because of the miscommunication there will be a briefing for street crews and measures will be taken “to ensure procedures are updated and executed.”

She adds the policy was brought into place to “equalize the balance that has been off in our City and not have pedestrians treated as second class to cyclists.”

Kirby-Yung adds, “We want to build complete communities that are climate friendly and that means we have to deliver on supporting pedestrians and key services.”

“Uncleared sidewalks and paths create safety concerns for people especially seniors and people who are mobility challenged. What I hear is that it deters people from going out. They just stay home and are isolated.”

She has a message for those in Vancouver who were impacted by the lack of snow clearing.

“I’m disappointed after working to prioritize pedestrians that the clearing didn’t happen, and will keep pushing for a city that safely supports walking and biking. It’s not either or; it needs to be both. Thanks to everyone who shared examples of what hadn’t been cleared so I could take this up with staff.”

The Manager of Street Operations for the City of Vancouver, Amy Sidwell, tells Daily Hive Urbanized that City crews have been working around the clock to implement a consistent, coordinated response to treating snow and ice on all key routes across the city. Key routes include major roads, bus routes, bridges and the 16 most-used bike routes and pedestrian pathways.

In an email, the City says, “Part our coordinated response plan and training for crews is to clear pedestrian pathway sections of bikeways in advance of the bikeways. Yesterday, there was unfortunately an implementation gap on various pedestrian pathways where our operators first treated the bikeways before the pedestrian sections. Crews recognized the error yesterday afternoon and yesterday evening initiated salt, brine, and plow treatments on those sections.”

Meanwhile, Vancouver Park Board Commissioner, Tricia Barker, told Daily Hive Urbanized that the City of Vancouver needs to do what they said they were going to do and clear the pedestrian walkways.

Hey @CityofVancouver,
I thought we had decided that pedestrian walks would be cleared before bike lanes?
This is a safety issue.
And so far I’ve seen lots of people walking and not one bike. pic.twitter.com/jWx63iX6lA