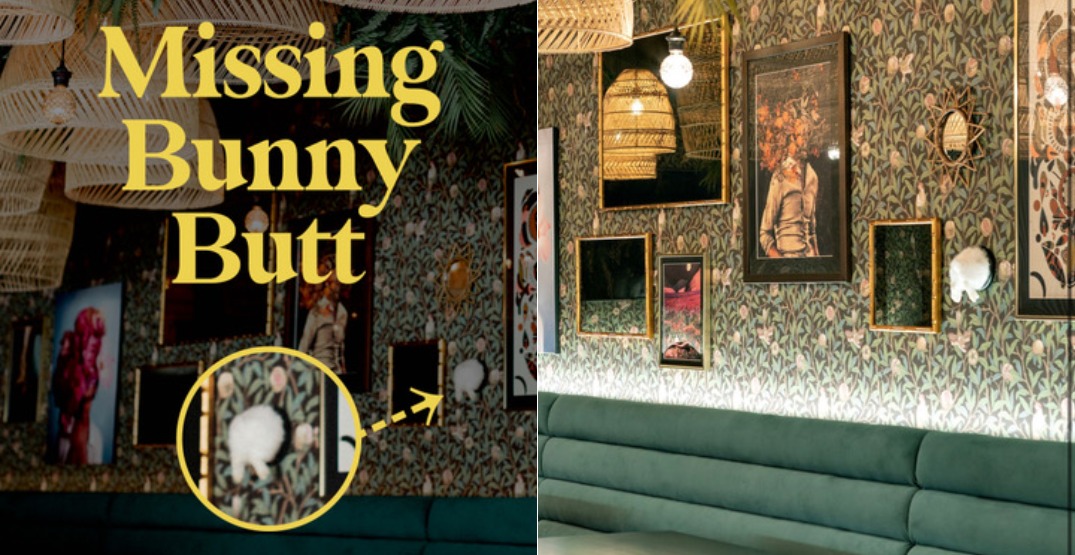 A taxidermy bunny butt once used to decorate the walls of Haven Kitchen + Bar in Langley has been stolen, much to the dismay of its owners.

The family-owned restaurant is recognizable for its quirky, partially Alice in Wonderland-inspired decor and cocktails, so losing the bunny butt — a nod to the fairytale’s white rabbit — was a tough pill to swallow.

Hayley Ruscheinski, an owner and operator of Haven, says she got it in a rare deal on eBay and hung it on the gallery wall in their upstairs mezzanine.

“He was one of our first purchases. He’s taxidermy, so we bought him as part of our decor,” she says.

“It’s not an easily replaced decor item, unfortunately, and yeah, it was stolen off the wall.”

Haven staff took to social media on April 27 to ask the thief to return it.

People often posted pictures of the bun booty while sitting at booths upstairs, she added.

But this time, someone took things a little further. The thief managed to g-rabbit without any of the staff noticing.

“It was one of the first decor items we got that really brought our inspiration together for … Alice in Wonderland-[inspired menus and areas] so it means a lot,” says Ruscheinski.

“That’s why we kind of took it this far, because we do want it back.”

The owners contacted the person who took the decor twice, since they had their information from OpenTable, but hadn’t received a call back as of 3 pm on April 27.

Without an answer, owners are left assuming the thief doesn’t care at all.

If he doesn’t return the item to Haven within 48 hours of when staff made the Instagram post about its absence, Haven is planning on posting security footage of the whole ordeal on social media.

“We texted him on Friday and called Monday and let him know we’d be doing a post on social media,” says Ruscheinski.

“Hopefully he comes tomorrow with it and it’s no big deal.”

If nobunny at Haven ever sees the taxidermy rabbit patootie again, they’ll look into getting another one in the future, she adds. But they’d be hopping mad about it.