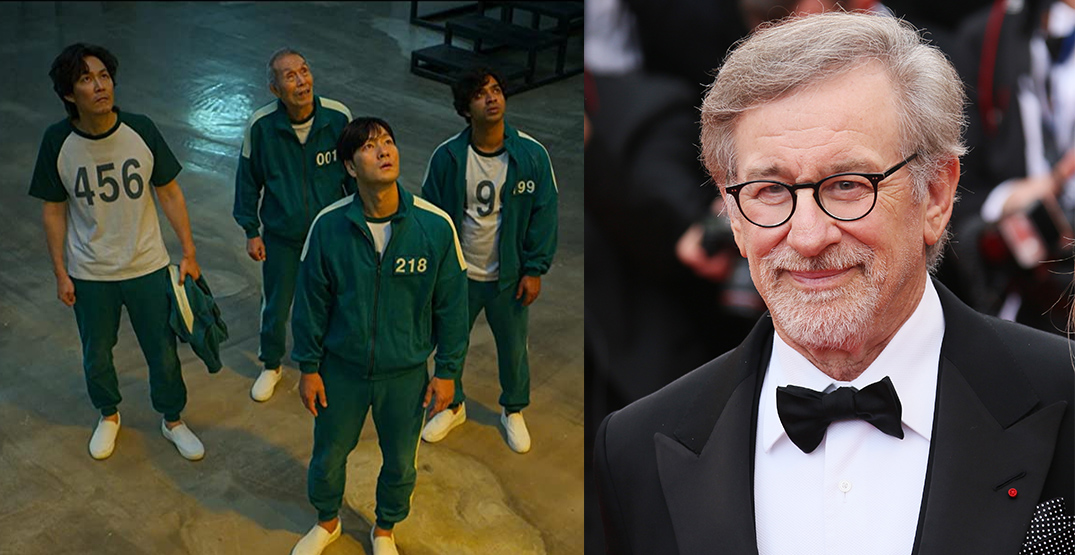 Steven Spielberg is feeling the heat from Squid Game fans online after making comments about the show’s casting during a panel.

On Saturday, Spielberg spoke about the hit Netflix show on a PGA Awards panel. According to Deadline, the director applauded the Korean drama for changing the industry.

“Squid Game comes along and changes the math entirely for all of us,” said Spielberg. He thanked Netflix CEO Ted Sarandos, who was sitting in the audience.

“A long time ago, it was domestic stars that brought the audience into movies,” he added. “Today, it’s interesting [that] unknown people can star in entire miniseries, can be in movies.”

The remark came during a conversation about the importance of high-profile stars in casting and how digital streaming services have created a space for unknown actors to successfully anchor shows and films.

While the West Side Story director praised the most-watched show on Netflix, fans were quick to point out that the Squid Games cast is, in fact, very well known.

The show stars Lee Jung-jae as the main character, Gi-hun, Park Hae-soo, famous model Hoyeon, Anupam Tripathi, Wi Ha-Joon, and Kim Joo-Ryung, to name a few. Fans stressed that while these actors aren’t well known to western audiences, many of them are very well established in South Korea and have the awards to prove it.

They feel Spielberg’s comments come from a very US-centric point of view.

“Argggg more ethnocentrism courtesy of Americans who can’t see past their own borders,” one person tweeted. “What series like Squid Game illustrate is exactly the opposite: that people around the world are satisfied with content other than English/white/US entertainment.”

Argggg more ethnocentrism courtesy of Americans who can’t see past their own borders. What series like Squid Game illustrate is exactly the opposite: that people around the world are satisfied with content other than English/white/US entertainment.https://t.co/T2jM0Y9Ns3 https://t.co/clXfkmeyXk

Others say people are missing the point of the director’s comments.

I know why people are calling out Spielberg but they are missing the point. Yes the actors were big stars in South Korea & across Asia but they were mostly unknown to domestic audiences, but the series still was heavily viewed despite this, he has a pointhttps://t.co/E924Tv6LFF

Correction: “Squid Game” proves that Hollywood has been waaayyyyyy behind in recognizing and celebrating longstanding S. Korean Film/TV storytelling and talent. https://t.co/G2J36f9cbc

Folks, today’s whitest take, brought to you by Mr. Steven Spielberg and the LITERAL all-star cast of “Squid Game” https://t.co/Lq2Oko8yJ6

Hollywood: it feels good to see these random people who came out of nowhere being given a platform by us ☺️ https://t.co/nEMW2nNfih

Steven Spielberg actually happy for Squid Game’s stars because he believes that if any filmmakers have the freedom to choose the best casting for their film, any movie could be a great movie.

I hate how IndieWire twisted Spielberg’s words like he’s a self centered person. https://t.co/qeWroZCUma pic.twitter.com/VDgkeVDlAP

Luckily, due to its immense popularity, Squid Games season 2 has been confirmed, so if you didn’t know the actors, you’ll certainly know them now!