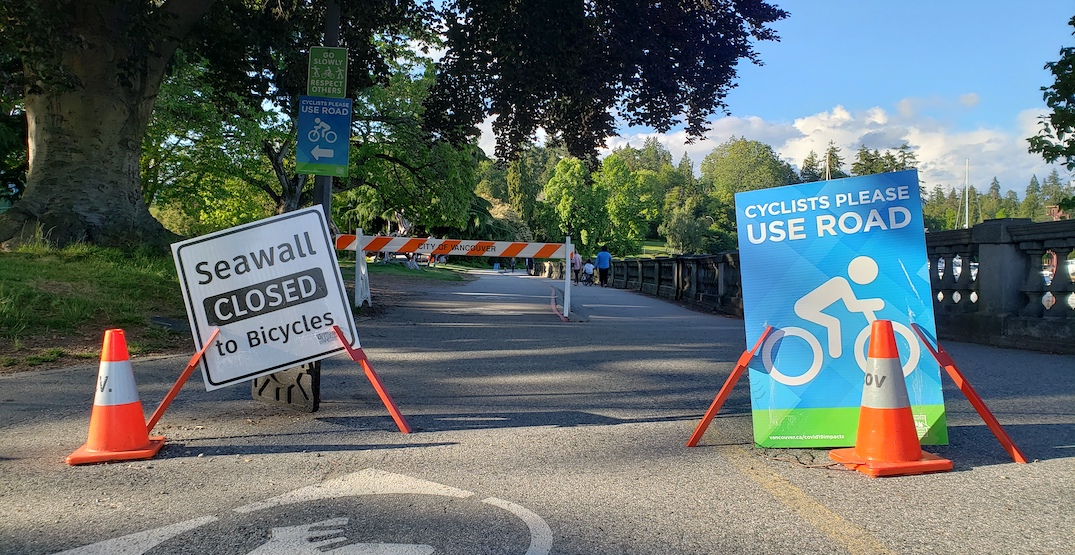 The closure of Stanley Park’s local roads to private vehicles will end in late June or early July.

The Vancouver Park Board closed the park’s internal roadways — not including the Stanley Park Causeway — to vehicles in early April as a temporary measure allowing for improved physical distancing on the seawall. Cyclists were rerouted to a one-way, two-lane cycling loop on Stanley Park Drive and a bi-directional cycling connector along North Lagoon Drive, while pedestrians retained the use of the seawall.

During Tuesday’s public meeting, Park Board staff said the changes that will be made to road access over the coming weeks will turn one lane of Stanley Park Drive into a lane for all vehicles and the second lane for cyclists. The two-lane roadway will be separated by a hard barrier, and passing lanes will be implemented for vehicles at the wider areas.

“There are a number of complexities when we start the lane approached, and we want to make sure we have the full sign-off from transportation planning to ensure we’re doing it in a safe manner, coordinating with operations and park rangers, and having our ongoing consultation with all of our partners in the parks, meeting their needs as best as we can,” said staff.

“We will require some procurement of the traffic management elements, and we know we need to do that in the COVID supply chain situation, so we’re doing our best to try to mitigate that. We’re sourcing those materials now, there are a number of things at play.”

Staff say the reintroduction of private vehicle access to all restaurants, attractions, and features of the park will help meet a wider range of mobility needs, including those who are bringing a family and individuals with a walker or rolling device.

The single lane of roadway for cycling enables physical distancing for pedestrians on the seawall, effectively opening up more capacity ahead of further phases of BC’s restart plan and the summer months to come, when more visitors are expected. Along certain areas of the seawall, cycling may be reintroduced.

“We’re doing our best to move as fast as we can to meet the timelines of businesses and attractions within the park,” said staff.

“We’re still in a pandemic response mode, we’re seeing park visitation increase in great numbers. The key driver behind this is opening up more space for physical distancing on the seawall by opening up safe room for cyclists on Stanley Park Drive.”

Although Stanley Park visitation has clearly increased during the pandemic, staff stated it was important to note this is a phenomenon for all parks across the city and wider region. Visitation is up by 50% to 60% compared to the same period in 2019, with Metro Vancouver Regional District reporting a 61% increase for its regional parks.

The spike is attributed to those who are “isolated to home or live in small spaces, and don’t have the luxury of gardens or yards,” following the lengthy period of stringent physical distancing and self-isolation.

Staff say the forthcoming temporary road access changes will double as a pilot for long-term planning, providing them with a better understanding of the park’s transportation system, which is a key part of ongoing work being performed on the Stanley Park Comprehensive Plan — a master planning process for the park.

In a 5-2 vote, Park Board commissioners also approved a controversial motion calling on staff to conduct a feasibility study on permanently reducing car traffic within the park over the long term.

An online petition fuelled by social media chatter in the middle of May suggested banning all cars in the park, but the motion later put forward by COPE’s John Irwin and Green Party’s Stuart Mackinnon recommended staff to study permanently closing one lane to vehicles — short of a full closure.

Prior to the meeting, businesses in the park expressed their opposition to the idea of the permanent changes, as much of their clientele depends on vehicle access, especially after the impacts of the pandemic, and during the wet and cold months when pedestrian and cycling volumes fall.

NPA commissioners Tricia Barker and John Coupar were also adamant that the decision should be delayed to a committee meeting to allow for this stage of the process to undergo public consultation, but only after health safety concerns end.

Barker particularly took issue with the city’s Seniors Advisory Committee being excluded as a key consultation group for the scope of the study’s work. An approved amendment increased the emphasis on considerations for accessibility for those with disabilities, and only included the Persons with Disabilities Advisory Committee.

Instead, public consultation will happen after staff return to the commissioners with a report outlining options and tradeoffs, possibly sometime in 2021.

This particular study, along with the pilot road changes, will help inform the Comprehensive Plan, with staff highlighting that not much has changed with the park’s transportation system over the past few decades despite seeing visitation increase to an estimated 10 million people annually.

“As we reopen our parks and recreational facilities, I believe this is a good time to examine our policies on accessibility. As Stanley Park has become more popular, I believe it’s time that we look at who has access and how they do it. I’m not sure the park is accessible for all, including those without their own vehicle, those with disabilities, or mobility difficulties for seniors,” said Mackinnon, who also asserted the concept of change is difficult.

“I think a complete review of accessibility to and within the park should be examined. The motion asks that our staff consider alternatives to what we have in place now. They may come back with recommendations to pedestrian and bicycle access, they may come back with recommendations that automobile access be changed, and they may recommend improved public transit within the park. They may recommend something else completely or they may conclude no changes are necessarily at all.”

But Coupar argued that Park Board staff and resources should be focused on managing the fiscal fallout from the pandemic and returning normal levels of recreational programming and services.

Earlier in the meeting, staff said the Park Board is currently forecasting a $38 million budget shortfall from the lost revenues of shuttered recreational facilities and cancelled programs, and the increased operating costs relating to the pandemic response.

Stanley Park’s pay parking stalls also typically account for about $4 million of the Park Board’s annual revenues. Privately-operated restaurants within Stanley Park provide roughly $1 million each year, with these businesses paying a percentage of their revenue as rent.

“Using this situation, this terrible situation where we’ve had to made some changes, we all supported it and I think it worked quite well for physical distancing. But to go farther at this point when Park Board staff are extremely stressed in terms of what our staff have to do, and they’ve already told you that they’re already having to resolve some of the issues, I think you’re sending a very wrong signal that you don’t want to listen to the public and that you want to do it from an ideological basis,” said Coupar.

On other Park Board matters, staff said they are exploring the feasibility of opening the concession stands at beaches and parks at some point later this summer, but it depends on whether there is enough business to sustain these operations.

The commissioners were also scheduled to discuss a motion to allow liquor consumption in a number of city parks and beaches, but it was withdrawn as staff is already working on this as a measure for the Park Board’s reopening plan.