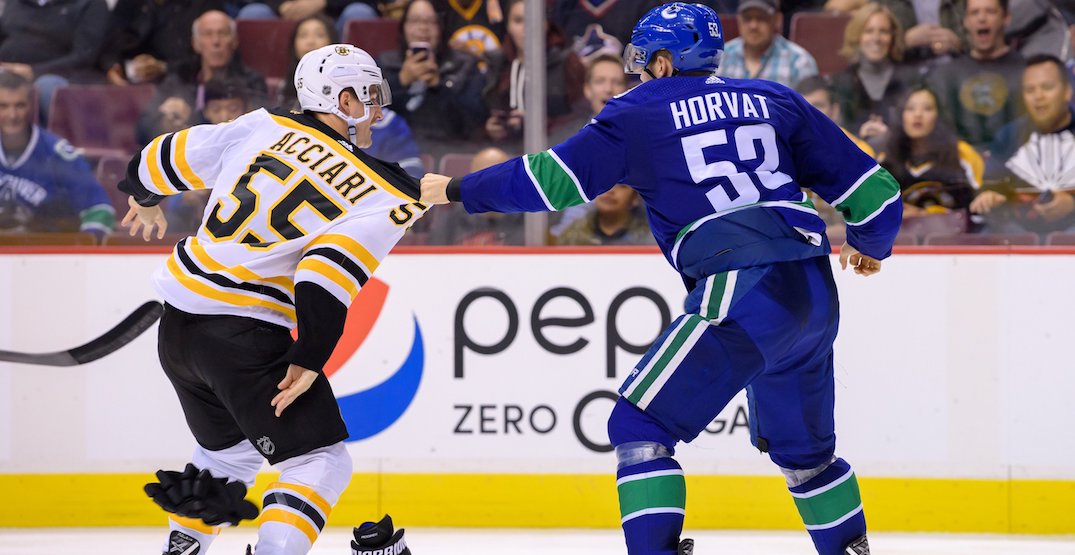 The BCHL has announced new measures to curtail fighting in its league going forward.

Stricter penalties will be enforced, with players receiving suspensions following their second fight of the season, and supplemental discipline increasing “exponentially” after that. That’s well up from the league’s previous policy, which called for a suspension after a player’s fifth fight.

The junior hockey league also said it will have “zero-tolerance” on instigator and aggressor penalties, with both acts resulting in suspensions on a first offence.

“The safety of our players is an integral part of any decision we make as a league and a stronger stance on fighting and zero-tolerance on instigators and aggressors is a great step forward,” said BCHL Executive Director, Competition and Events, Steven Cocker. “The game continues to evolve and move in the direction of speed and skill and we want to be on the forefront of that movement.”

What about fighting in the NHL?

The BCHL didn’t mention COVID-19 as a reason for working to reduce hockey fights in its league, but you have to think that’s going to be a concern for the NHL.

One advantage hockey has, compared to other leagues looking to restart their seasons, is that players are wearing gloves at all times. The one exception is during a hockey fight, which by the way also results in hand-to-face contact.

Will the NHL stick with a simple five-minute major for fighting when it returns to play this summer? Or will they issue a mandatory suspensions to effectively eliminate it?

This would be the time to try it.

Fighting is already on the decline in the NHL. Under 20% of games see a hockey fight nowadays, according to HockeyFights.com, as the league has seen a steady decline in fights since 2008-09, when 41% of games included two players dropping the gloves for bareknuckle boxing.

Fights are less relevant in the playoffs, with just three fighting majors issued during the 2019 postseason.

So for safety, both with regards to brain injuries and avoiding the spread of a deadly virus, it probably makes sense to eliminate it.

I wonder how many NHL players would have released statements about racism if it weren’t for Evander Kane. Full credit to the Vancouver native, who called on white athletes to use their platforms for this cause.

NHL players are notoriously  reticent with regards to political or social issues, but this moment was different. One by one, many of the league’s most recognizable players spoke up, including Connor McDavid, Sidney Crosby, Alex Ovechkin. There’s now too many All-Stars to list them all.

Canucks players spoke out too, including Bo Horvat, Troy Stecher, and Jake Virtanen. Brock Boeser and Elias Pettersson didn’t release statements, though they did show support on their Instagram pages.

This, by the way, is the second time this season that the Canucks’ young captain has spoken out for what is right on a race-related issue. Horvat was firm in his stance that Don Cherry’s derogatory comments about immigrants back in November, saying they had “no place” in hockey.

Here’s a look at what Canucks players have said this week:

We must be better.
We must raise awareness through education.
We must be together to make needed change.
Equality for all, justice for all.
I take the pledge.#DifferentTogether

Brock Boeser doing the right thing and being the first Canuck to say anything that addresses what's going on. #Canucks pic.twitter.com/QaIgh30ehh

Race for the Calder Trophy

The choice for the NHL’s Rookie of the Year in Vancouver is clear, it’s Quinn Hughes. It’s clear in Denver too: Cale Makar.

What will ultimately decide who wins the Calder Trophy this year will be what the rest of the league knows about two outstanding young defencemen.

Hughes holds the edge in assists (45) and points (53), while Makar had more goals (12) and a better points per game average (0.88, compared to Hughes’ 0.78). The Athletic’s Thomas Drance made a compelling case for Hughes way back in December, and the Canucks defenceman had been picking up momentum in the second half of the season.

The Pro Hockey Writers Association, to which this writer is a member of, will pick the winner. To get a glimpse of which way the PHWA is leaning, I’ll point out that Makar beat out Hughes as the midseason pick on January 23.

But at that time, Makar had the statistical advantage, with a three-point lead over Hughes despite playing seven fewer games. In 20 games since then, Hughes has pulled away with 19 points, compared to Makar’s 13 points in 16 games.

Given that he is a driver of offence while also being leaned on often in a shutdown role as well, I’m giving the nod to Hughes.

This video is nearly two years old, but it was trending on Reddit earlier today. And I don’t need much of an excuse to revisit why Canucks fans hate Mark Messier:

If there's one thing we love about @CanucksFin, it's how he makes people smile. Join us in wishing him a Happy 19th Birthday! 🥳 #Canucks | #OrvilleCanada pic.twitter.com/kfFsuLPmwr

I won’t reveal the name of the person that plays Fin, but fun fact: it’s always the same guy. The loveable whale has really been earning his keep during the pandemic, visiting hospitals and doing drive-by birthday surprises for charity.

Is there any reason why he can’t wear #00 like the Canucks’ failed 1990s mascot, Prankster Bear? The blank jersey with “FIN” in oversized letters on the back has never looked right to me.

Prankster Bear watches ominously from above. from r/canucks