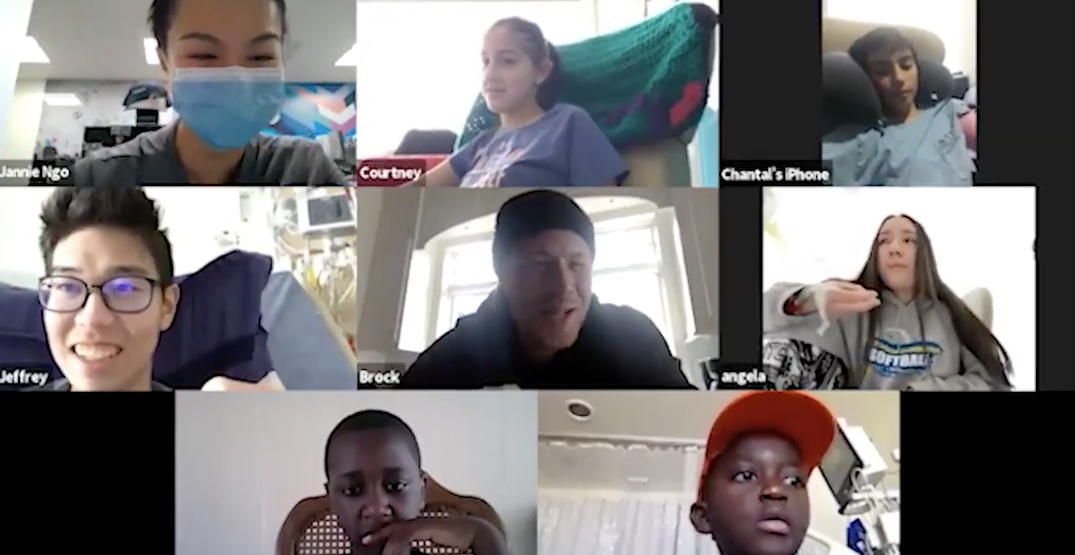 Speaking from his home in Minnesota, Brock Boeser made a “virtual visit” to the BC Children’s Hospital this week.

Boeser was great with the kids on the video call, and full credit to the youngsters, who got some pretty good answers out of the usually stoic Vancouver Canucks star.

Through the call, which was posted online by the Canucks’ official Twitter account, we found out Boeser’s favourite food (salmon oshi sushi from Minami), favourite teammate (Troy Stecher), and favourite sport outside of hockey (golf).

Another good question asked was about who the best “prankster” on the team was. Boeser’s answer? Antoine Roussel.

Near the end of the call, one polite kid can be heard saying “thank you for doing this for us.”

But on behalf of the media, let me say, thanks kids for those great questions!

The case for hosting NHL games in Vancouver

The most interesting local development this week in the world of sports has been the enthusiasm to which the BC government would like to see NHL hockey return to Vancouver.

BC Premier John Horgan sent a letter to NHL Commissioner Gary Bettman, stating the case for the province as an “ideal location to host the resumption of NHL games.”

Bettman thanked Horgan for the offer, but was of course non-committal at this point.

While an influx of players, coaches, and staff from eight Pacific Division teams could pose a (hopefully minor) health risk and fans won’t get to attend games, there are some potential benefits.

The economic benefit is clear, as teams will need to spend money locally on things like hotel lodging and food at local restaurants. But Horgan also alluded to a potential symbolic benefit.

“I have no doubt that everyone will appreciate feeling a sense of a return to normalcy that the return of hockey would engender,” the premier said in his letter to Bettman.

Knowing that games are happening in Vancouver would be a source of pride, both in terms of a sense of normalcy, but also in our city’s success in slowing the spread of the virus.

How long has Jim Benning been Canucks GM?

Will he some day also pass Quinn on the list? Time will tell. pic.twitter.com/smvWeLw8MK

Condolences to the MacEwen family

Today the Canucks organization mourns the loss of Zack MacEwen’s father, Craig MacEwen. Our heartfelt condolences go out to Zack and the MacEwen family.

I’m sure one of Craig’s proudest moments was watching his son Zack make his NHL debut with the Canucks, after beating the odds as an undrafted player.

Sincere condolences to the MacEwen family.

It’s the end of an era for the BC Lions. As first reported by Global’s Jay Janower, Travis Lulay has left the organization that he’s been with since 2009.

Travis Lulay is no longer a member of the #BCLions organization…I'm told the decision to leave the club was Lulay's…@TravisLulay thanks for being a stand up, honest, great guy! Always made time for the media, always kept it real…wish you the best of luck, you'll be missed.

TSN’s Farhan Lalji reports that Lulay will be part of his family’s financial planning business in Oregon.

Bittersweet news that @TravisLulay has left the @BCLions organization. Back in Oregon where he will be a part of his family’s financial planning business. Gonna miss him in these parts. Just a pleasure to deal with as a player & post-career. The @CFL’s loss is Oregon’s gain!

Speaking of the CFL…

Commissioner @RandyAmbrosie said “most likely scenario” is no 2020 season. #CFL

NHL teams often quibble with the language used to describe a rebuild, instead favouring terms like “retool” and “rebuild on the fly.”

Well, when it comes to Vancouver’s pro esports team, the Vancouver Titans, you’d have to classify it as a blow-it-up, full-scale rebuild, as they’ve parted ways with their entire roster, as well as several coaches.

Too bad, because they were the most successful pro team in the city.

Finally, the guy that everyone’s been talking about for the last couple of days: Brendan Leipsic.

We wrote about the former Canuck yesterday, and I’ve seen the Facebook comments. Some people think it’s not a big deal, or feel like he should get a pass because he was making private comments to friends in a group chat.

But while just about anyone would be embarrassed by the contents of a group chat becoming public, Leipsic’s comments took things to another level. The NHL called them “misogynistic and reprehensible,” and I think that’s accurate.

He wasn’t even clever, either. He was just mean.

The comments will likely end Leipsic’s NHL career, given he is without a contract beyond this season. A better player would get a second chance, but a fourth-liner like Leipsic? Well, he’s likely destined for the KHL.