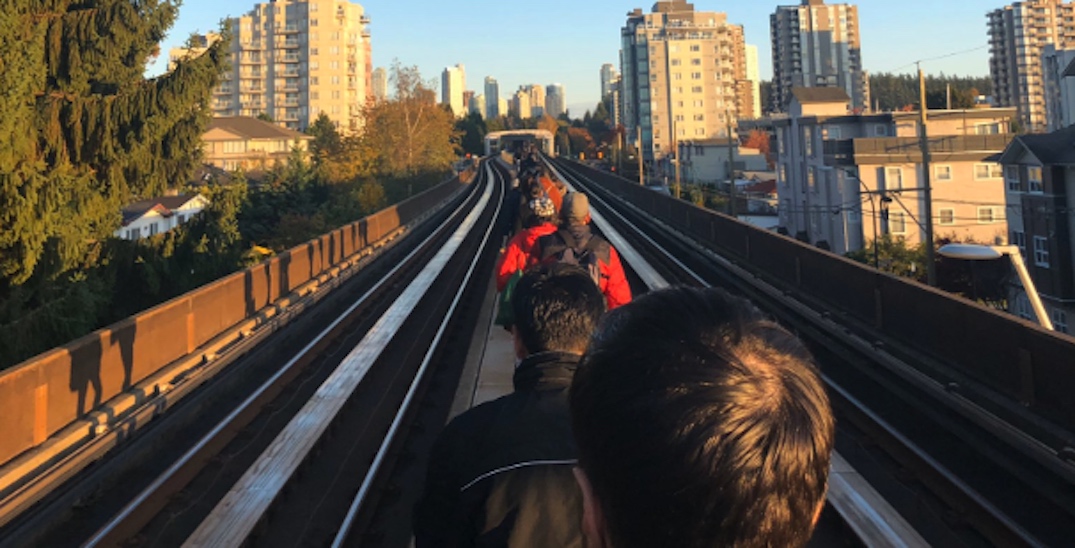 Passengers being instructed by SkyTrain attendants to exit a train due to the Expo Line service disruption from the windstorm on October 25, 2019. (@trininguyendon / Twitter)

UPDATE at 7:50 pm: Regular service on the Expo Line is resuming. It may take some time for trains to speed up to regular intervals.

UPDATE at 6:10 pm: Very limited train service has been restored. Some trains are now using the unaffected part of the guideway, alternating directions. Passengers should note that some trains are still turning back at Commercial-Broadway and Metrotown stations. Continue to expect major delays; passengers are still advised to consider taking the Millennium Line and the shuttle bus bridge.

The windstorm has taken out much of the SkyTrain service on the Expo Line, after a tree fell onto the guideway between Metrotown Station and Commercial-Broadway Station.

The incident occurred at approximately 5 pm late this afternoon. Significant delays should be expected.

TransLink says there is no train service between Metrotown Station and Commercial-Broadway Station; trains are turning back at these stations at this time.

Passengers are being asked to switch to the Millennium Line at Commercial-Broadway Station and transfer back to the Expo Line at Production Way-University Station or Lougheed Town Centre Station.

The public transit authority is in the process of setting up a bus bridge shuttle service between Commercial-Broadway Station to Metrotown Station.

The Millennium Line and Canada Line are unaffected and currently operating normally, but additional security and Transit Police have been deployed to ensure safety and crowd control.

There is no estimated time for the return of regular service.

Photos and videos posted on social media show some passengers on stranded trains were safely evacuated and led to the nearest station by SkyTrain attendants.

The windstorm, reaching gusts in excess of 80 km/hr, has been toppling trees and power lines all day. As of 5 pm, BC Hydro reported outages to about 125,000 customers in various regions of the province.

Hey @TransLink, a big tree branch fell onto our Skytrain car and broke one of the door windows. Happened just after leaving 29th Ave. pic.twitter.com/9M0MqLJeH2

nice day for a stroll along the skytrain tracks pic.twitter.com/xRb3wWmdXR