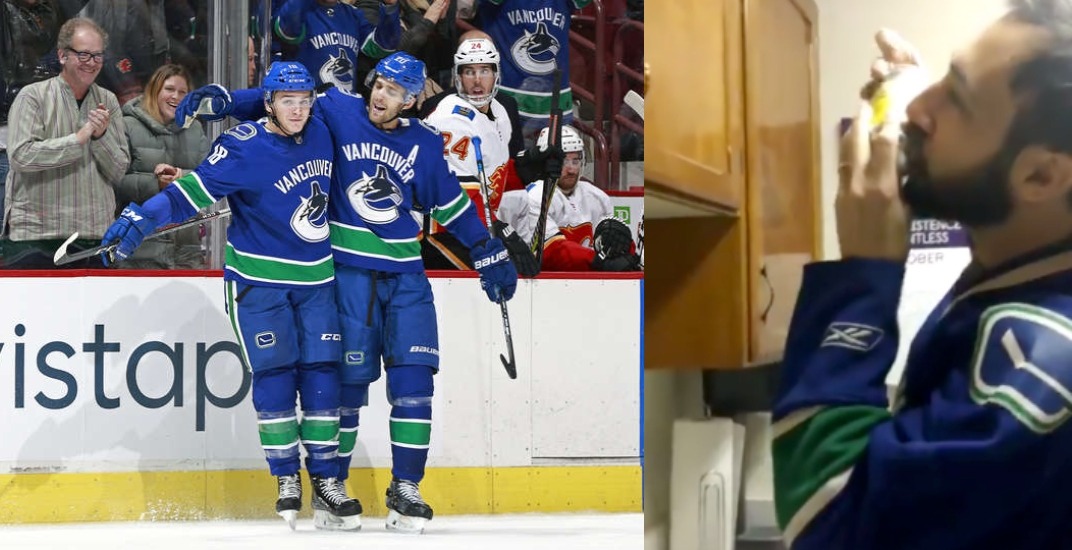 A new Canucks tradition was born on Wednesday.

Following a bold prediction this summer by TSN 1040’s Jason Brough, he and co-host Mike Halford vowed to do something different to celebrate every goal scored by Jake Virtanen this season.

Most radio show hosts would have left it at that, but Halford and Brough are not most radio hosts.

The artists formerly known as the “Kurtenblog” are putting their livers where their mouths are, shotgunning a can of beer for every goal Virtanen scores on the march to 20. They’re calling it “Shotgun Jake.”

Virtanen did his part on Wednesday, kicking off ‘Shotgun Jake’ in style with a beautiful breakaway goal in the Canucks’ 5-2 win over the Calgary Flames on opening night.

Canucks Nation joined in, with fans posting their own Shotgun Jake videos to Twitter:

This guy even slammed a $16 beer at Rogers Arena:

And the videos just kept coming and coming…

@HalfordTSN @JasonBroughTSN I stole this @AlexanderKeiths from my moms garage and brought it to work 😏. Cheers boys! I’ll be sending you a video for every goal! #SHOTGUNJAKE pic.twitter.com/yxxcmta8pc

Mid hockey game someone from the bench yells "Jagga your Boy Jake scored!" Immediately I asked for the ball and sniped one myself, while yelling out SHOTGUN!!! JAKE I hope you score every game! #ShotgunJake @Jake_Virtanen @HalfordTSN @JasonBroughTSN #beer #19more #firstgoal #fan! pic.twitter.com/ZjGchYBSqK

So, first off, you guys and girls are absolute beauties. Thanks for making #shotgunjake a thing tonight.

Second, I was playing ball earlier when Brough posted the vid. But I’m live now! pic.twitter.com/NIrhsqYzRG