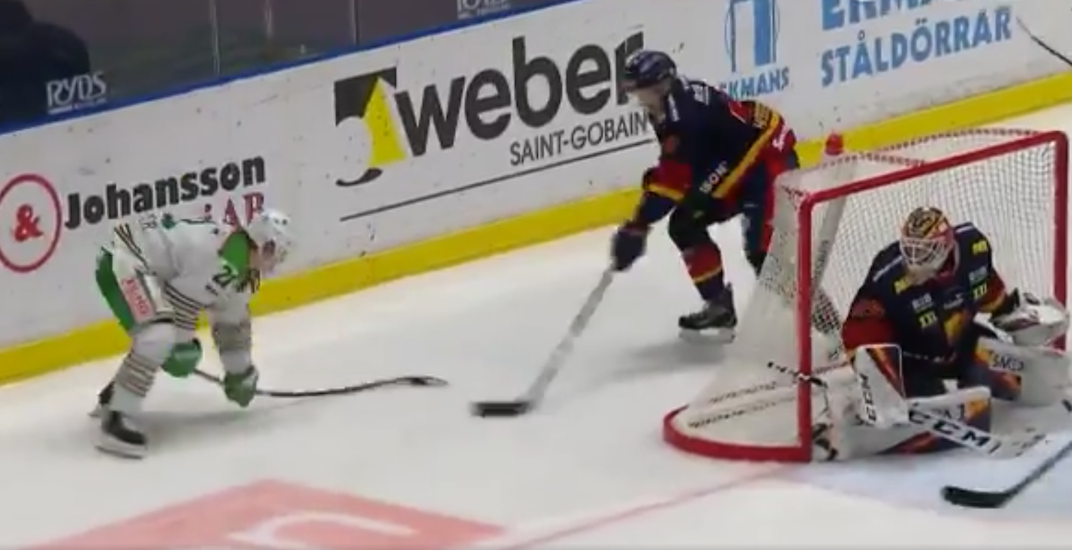 Nils Hoglander has the hockey world in awe today with his jaw-dropping goal scored in Sweden.

The 18-year-old Vancouver Canucks prospect didn’t just pull off the lacrosse move, he did it with a defender on him. He even did a bank-pass off the back of the net to himself to get a little bit of extra space prior to scoring.

You’ll be hard-pressed to find a more impressive move.

Let’s take another look at it from a pair of angles, courtesy of Canucks prospect expert Cam Robinson:

Nils Höglander is at it again with the lacrosse-style goal! #Canucks

From another angle. The bank off of the back of the net is sweet enough. To pull off The Michigan while under pressure is insane. pic.twitter.com/Qt5fZhzxFT

Hoglander, who was chosen by the Canucks 40th overall at the NHL Draft this past June, pulled off this move in Sweden’s top professional league, the SHL.

It’s not the first time he’s done it, as Robinson illustrates below, though today’s goal clearly had a higher level of difficulty.

The 5-foot-9 winger was a man of few words at the draft, simply saying, “I trust myself,” to describe how he felt confident enough to try such a difficult trick shot.

He lets his play on the ice do most of the talking.

The goal was Hoglander’s third, to go with one assist, this season in 10 games with Rogle in the SHL.