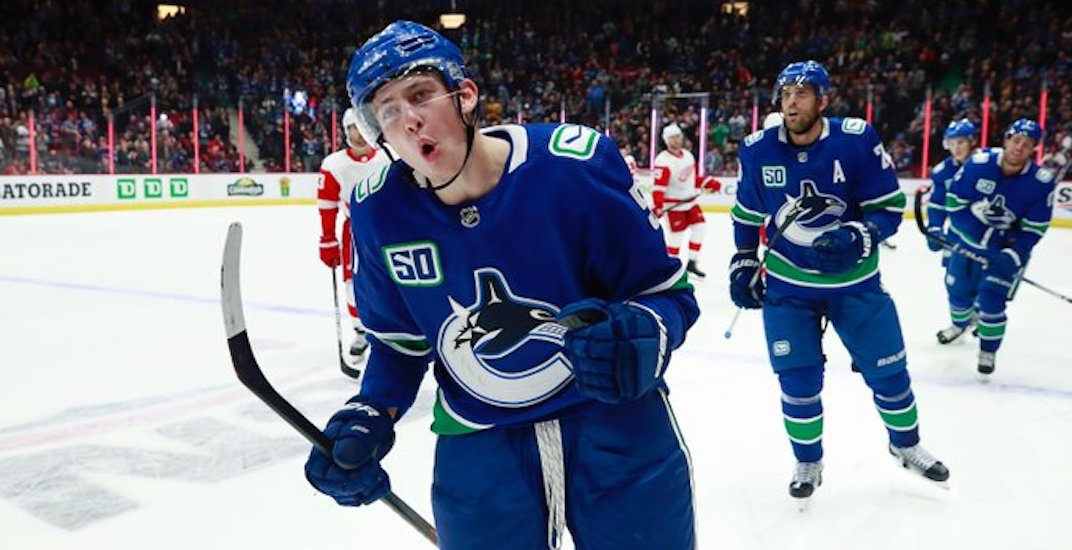 “We’re not going to be f*cking suck this year!”

As Ovi and the Caps roll into Vancouver for tonight’s game, you have to wonder if some of the Canucks players want to yell something similar.

No, the Canucks aren’t a Stanley Cup contender yet, but they look like they could contend for a playoff spot.

And for the first time in five years, they don’t suck.

Suckiest bunch of sucks that ever sucked NO MORE

The Canucks have jumped out to a 6-3-0 record, giving them the sixth-best points percentage in the NHL. They’re middle of the pack (14th) in goals-for per game (3.11), with two 5+ goal outbursts being averaged out by a pair of shutout losses.

The real story is how their goaltenders have played, with Jacob Markstrom and Thatcher Demko leading the team to a league-best (tied with Boston and Arizona) goals against average (2.11).

If you’ve been a fan of the Vancouver Canucks for any length of time, you’re waiting for the other shoe to drop. That’s what 50 years of heartbreak will do to you.

In nine games, the Canucks have played just three teams that are currently above the playoff bar (Edmonton, Calgary, St Louis) and lost to two of them.

The difference? The performance of this year’s group seems far more sustainable than those previous editions.

Remember when they started off the season 4-0 in 2016-17, having held a lead by a grand total of just 28 minutes and 50 seconds during the streak? They proceeded to lose nine in a row.

This team seems different. They’ve got good goaltending, balanced scoring, and the deepest defence they’ve had in years. They’ve also got Elias Pettersson, who despite having 10 points in nine games, can play even better. That’s how high his standards are.

PP1 is better with Hughes and Horvat on it… Duh

The Canucks went against conventional wisdom to start the season, choosing balance rather than loading up their top power play unit.

That put Quinn Hughes and Bo Horvat on the second unit, something that has to be considered an error in judgement by the coaching staff.

The power play is better with Hughes on it. The rookie looks like he was born to quarterback a power play, and the first unit has been noticeably better since he took over from Edler.

Besides, Edler is averaging close to 25 minutes per game, and can use the rest.

With Hughes, suddenly the first unit has movement and a real threat from the point. Edler is still a good player and doesn’t get the credit he deserves from many fans, but this is Hughes’ show to run.

But while Hughes’ omission on the top unit drew most of the headlines, putting Horvat on PP2 seems puzzling too. With Horvat playing the bumper spot, the Canucks have put another smart and talented player in the mix.

Suddenly, the Canucks’ power play has movement, different looks, and is unpredictable. They’ve done so with Horvat leading the way in power play goals (4) and Hughes second in power play points (4).

Jay Beagle, Brandon Sutter, Tim Schaller, and Tyler Motte don’t get a lot of love from the fan base, and the decision to keep them ahead of skilled players like Sven Baertschi and Nikolay Goldobin was criticized.

While I still think demoting Baertschi in particular was a mistake, you can see the method behind Travis Green’s perceived madness.

Beagle, Sutter, Schaller, and Motte lead Canucks forwards in shorthanded ice time, and have the Canucks ranked fourth-best (88.2%) on the penalty kill so far. Goaltending and defence should get credit too, but we shouldn’t ignore what the forwards have done.

It remains to be seen if the price they paid for him was worth it, but JT Miller has been better than anyone predicted. He’s tied for the team-lead in points (10) and has fit in well on every line he’s played on, ranking first on the team in Corsi-for percentage (64.94%).

Tyler Myers has also had a nice start to his Canucks tenure, with the doom-and-gloom predictions from some in the analytics community yet to come to fruition. He leads the team in even strength ice time and ranks second only to Edler in overall ice time. He’s playing big minutes on a shutdown pairing and with limited exceptions, he’s looked solid — second only to Hughes among defencemen in Corsi (55.63%).

It’s been a far less successful tenure for Micheal Ferland, who has just two points (1-1-2) as he has struggled following getting sick in preseason. Ferland leads the team in hits (25), so there’s that, but so far he has to be considered a major disappointment.

Pre-season is a sham

Think about all the time we wasted discussing Adam Gaudette in September.

The 23-year-old earned a spot on the team with a strong preseason, but only drew into three contests when the games began counting for real, and now he’s in the AHL.

If Gaudette wasn’t going to play games with the Canucks, Utica is the best spot for him, but it does make preseason feeling even more meaningless than it already was.

If he was so good that he forced the team to put a player on waivers, didn’t Gaudette deserve a longer look than three games? The Canucks are winning, so it doesn’t matter — it just doesn’t add up.

Injuries are inevitable, and Gaudette will surely be the first player recalled when the team loses a forward.

The factor we’re probably not discussing enough with Gaudette is the fact that he becomes waiver-eligible once he plays 16 more NHL games, meaning the Canucks will have less roster flexibility.