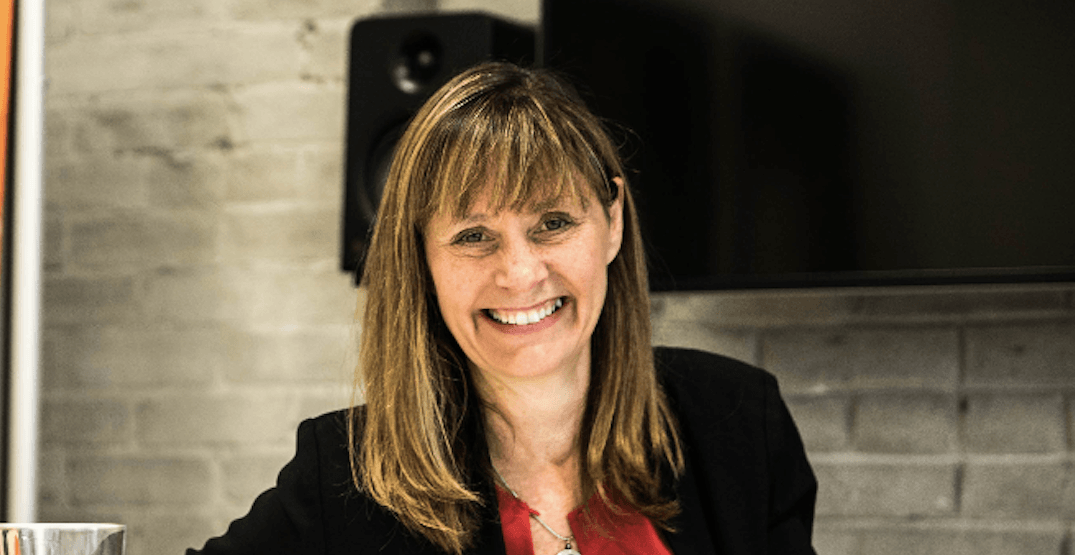 Even after 50 years, Shauna Sylvester said the city of Vancouver “still surprises” her.

“I open a door there’s a part of the city, open another door, another part,” she said. “We have so much to unlock in this city.”

And tapping into that potential is just one of the things that Sylvester, an independent mayoral candidate in this month’s municipal election hopes to accomplish, if she’s elected.

And this week, Sylvester sat down with Daily Hive to talk about just what that entails.

When it comes to tackling the housing and affordability issue, Sylvester said the biggest thing “is the political will to create the kind of housing that we need for people in the city – rather than just create housing.”

What this means, she furthered, “is that we need housing that people can afford, we’ve got to get the 3% vacancy rate, and the rents have to match people’s salaries. We have to get to the stage where people can get to affordable home ownership and there’s no reason you shouldn’t be able to get there, either.”

A housing authority is one way to do this, she said, “co-housing is another.”

As well, “we can gently densify the city; 25% of the city has community plans, but is absorbing all the density.”

Sylvester said she’s talked to people on the west side of Vancouver “who are tired of the place hollowing out and they want density. But it has to fit within the character of the neighbourhood.”

Partnerships are also needed “where city land can be brought to the table with the community housing sector, who can build affordable, purpose rental. They know how to build and leverage their capital flows.”

“If purpose-built rentals are going to be built, let’s fast-track them,” she said. “Let’s give them incentive to do that, or if they want to pursue market, let’s get them to pay a community amenity contribution that would go into an affordable housing fund.”

She also noted the city currently has 100 lease co-ops, where co-op members pay rent, that need their renewal of land leases from the city. “We could do so many more of those and that’s an affordable way for families to come into this market.”

Sylvester said the housing issue is “not rocket science, and that so many places in the world have figured it out.”

She admitted though, that in Vancouver, there are some unique factors at play.

“We didn’t do housing 10 years ago – it was the federal government,” she said. “Now, we do housing but we’ve gotten into it in a really weird way – we got really prescriptive and acted like we knew what we were doing.”

And while it may have been previously unfamiliar territory, “the community has in its sectors 40 years of expertise – start treating those sectors like a partner, give them the land that’s going to make it affordable and let’s do some creative things and stop micromanaging everything.”

Sylvester said that while there is “so much” going on in the city, “more support” is needed.

“We don’t have a lot of venture capital here, but what we can do is create enough of an ecosystem of people and places that are going to attract funding,” she added. “The film industry is doing well, we’re doing better in the creative economy, and in the green economy we’re doing well in some places, so those are real advantages.”

Part of it, she said, is changing the way the city approaches and thinks about fostering industry promotion and job creation.

And while Sylvester said she understands how current policies evolved, “the problem is now there’s all these overlapping policies. It’s no wonder City Hall is going crazy.” 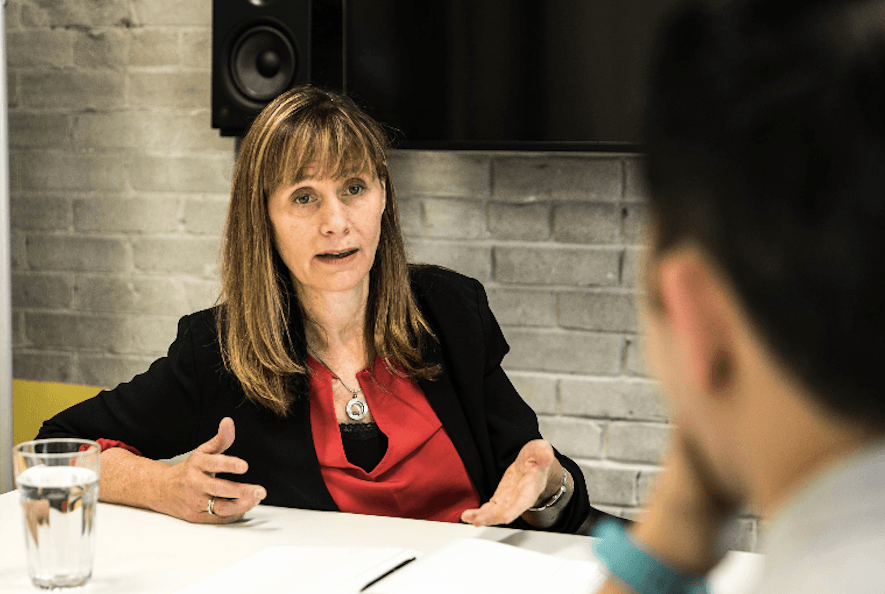 While promoting new industries and technologies is important moving forward, Sylvester said it’s also important not to ignore the small-business, mom-and-pop ventures in the city, either.

Years ago, she continued, “the City made a commitment that 50% of our budget would come from business, so even though we have way more residents, business are paying 4.8 times the property tax of what a resident does and small businesses are getting killed by that.”

Sylvester explained that all businesses “whether mom-and-pop, or Amazon, come under one category – called commercial – based on your assessment. The city applies a mill rate, and that determines what the property tax is.”

Sylvester would also like to see a policy review within the first 100 days of her taking office, “then I want to streamline what’s absolutely necessary and clean it up. Let’s really create a fast-track, because what’s killing small business is all the wait times and the endless permitting and investigations that are going on.”

And while she’s encouraged by some of the progress she’s seen, “I also want to see the BIAs really push into thinking in more modern terms and really be there to support small businesses.”

On the subway extension from Arbutus to UBC

For Sylvester, the question of extending the Millennium Line subway extension to UBC (it’s currently slated to end at Arbutus Street) is a “no-brainer.”

She added that in fact, “that’s always been the plan,” but the reason for the line stopping where it’s currently slated to, is because Vancouver “didn’t play with the region.”

For the last 10 years, she furthered, “Vancouver has had a very Vancouver-centric perspective, but to succeed in Vancouver, you’ve got to have a regional perspective, especially with transportation; you’re one of 22 on the mayor’s council. If you don’t show up and collaborate, this is what happens to you.”

Sylvester said she knows “there’s interest from the federal and provincial government – they’re expecting the ask. I also know that UBC administration is open to putting some money into it.”

To drive her point home, Sylvester said that on any given workday, “UBC is the second-most visited destination in BC, after downtown Vancouver – and most of that is in cars.”

She called UBC a “super important innovation driver” in the city and noted that “you don’t just leave an innovation centre out there by itself. It’s an economic development opportunity, as much as it is about getting people in and out.”

While Sylvester agreed the city does struggle with a “No Fun” reputation, she said there are a lot of things that can be done to tackle it, “including really upping our game on what can happen in the downtown core,” particularly with festivals and public spaces.

“I’ve worked a lot in the public spaces and we need to animate them,” she said. “There’s so much we could do with the space we have. We’re too punitive, and we’re too afraid of failing – we have to change that mindset.”

Sylvester said there are two places she would like to “reimagine” right away: The Granville Strip, and the Downtown Eastside.

“Remember what Granville Street was like during the Olympics? Why can’t we come back to that?” she quipped.

As for the Downtown Eastside, Sylvester said it’s time to really create a new vision, “because what’s going there is not okay, but that mindset can change.”

Saying she’s bored of the “concrete jungle” that is Jack Poole Plaza, Sylvester said the city is in need of more public festival space as well. “I did my degree at McGill, and there wasn’t one day I didn’t go to university and didn’t see a festival,” she noted.

In her mind, the one place in the city that currently has some life to it is English Bay. “Stuff is always going on there, and everybody is there on a summer night.”

She noted the City could also be doing a lot more to promote its arts and culture scene. “We struggle with it, but yet in international terms, we’re considered this hotspot, which is interesting.”

Sylvester said the arts and culture scene does need to be supported and promoted more, offering a few of her ideas on how to do that.

“We have food trucks, why not artisan trucks?” she said.  “We have to come with things like more maker spaces, linked community centres, and places for local bands to practice. We also need to come up with much more cheap industrial space and I know the Vancouver Economic commission is trying to figure out where that could be.”

For Sylvester, Vancouver is a place of innovation and ideas, and now is the time to grow and support it in those endeavours.

“Vancouver is starting to be known as an idea centre and part of that is tech, but there’s more to it than that,” she said. “We might not have all the big head offices, but we’ve got the early-stage launch places and we’ve got the people that are not afraid to fail, that are trying things out.”

And even though Vancouver has “all these globally connected citizens” it doesn’t look at that as the asset that it is, she said.

Sylvester said the underlying story people talk about, is that Vancouver is a place “where people punch above; a place of great ideas. You want to know, things are happening or be on the front end of trend, you come here. It’s a very cool city.”

On her message to voters

While the city is not without its issues, Sylvester said she has a message for voters, particularly the younger demographic: Don’t give up – step up.

“I want young people not just to stay but to recreate the city,” she said. “The skills you have are what we need if we’re going to move the city to being more like a platform, more modal and more networked, which is what we have to do.”

That being said, “when I actually look at the people who are running, there’s so many good people.”

If she’s elected mayor: “I don’t care who else is around that table. If they’ve got a good idea and they’re here to achieve something, I’m going to help them achieve it.”