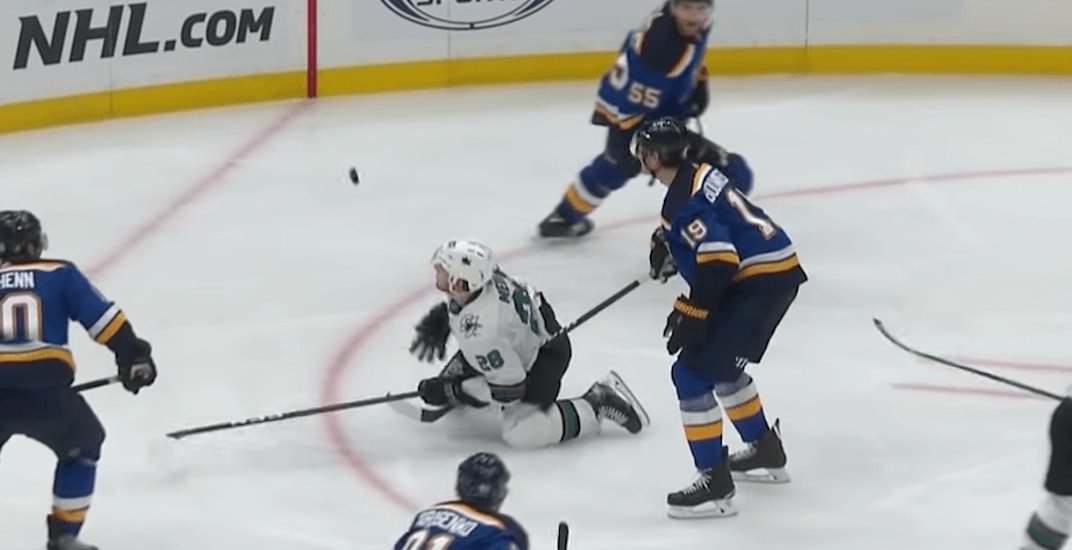 Another day, another controversy in the Stanley Cup playoffs.

The San Jose Sharks were once again the beneficiaries of a controversial call on Wednesday, as they got away with a blatant hand pass in overtime that led to the winning goal.

Sharks forward Timo Meier made a hand pass to Gustav Nyquist, who immediately pass the puck to Erik Karlsson for the game-winner, giving San Jose a 5-4 win and a 2-1 series lead over the St Louis Blues.

The play isn’t reviewable and all four on-ice officials missed it, so the refs had no choice but to allow the goal.

It was a tough pill to swallow for the Blues, who argued profusely, as well as their fans, who littered the ice with debris.

me and every other blues fan rn: pic.twitter.com/JusqTYkzY1

They're throwing bottles at the officials

“I didn’t really get an explanation,” said a frustrated Blues captain Alex Pietrangelo. “I guess there’s a different set of rules for two different teams. I’m sure [the referees] will lose some sleep tonight after looking at it.

St Louis head coach Craig Berube didn’t want to talk about it. When asked by a reporter if he thought there was a hand pass on the play, he responded with “well what do you guys think?”

When the reporter answered “yes,” Berube snapped back, “ok, well then don’t ask me.”

This is the second high-profile refereeing error that has benefitted the Sharks in these playoffs, as they took advantage of a bogus five-minute major penalty in Game 7 of the first round against the Vegas Golden Knights.