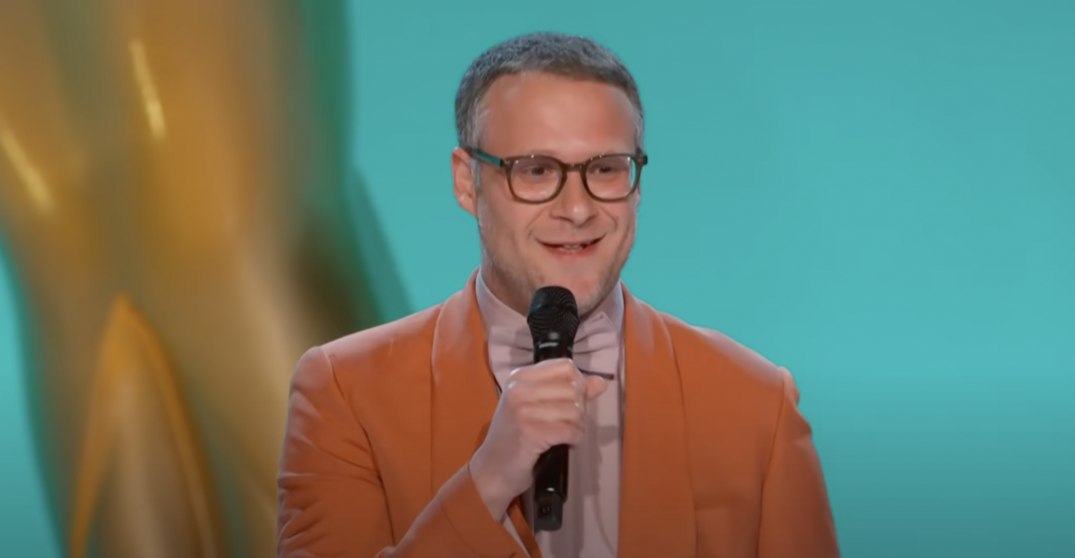 During the Emmys on Sunday, September 19, one Canadian celebrity was getting quite a bit of attention – but not for the reasons you might think.

Seth Rogen was a presenter and took his opportunity with the mic to share how he really felt about the COVID-19 protocols in place.

“Good to be here at the Emmy Awards,” he said. “Let me start by saying there is way too many of us in this little room.”

“What are we doing? They said this was outdoors; it’s not! They lied to us. We’re in a hermetically sealed tent right now,” he said.

The event was taking place at the Event Deck at LA Live in a giant tent.

“Why is there a roof? It’s more important that we have three chandeliers than that we make sure we don’t kill Eugene Levy tonight,” he said.

But throwing shade at the Emmys for being too crowded wasn’t the only reason why Rogen garnered a ton of attention.

While presenting an award for Outstanding Supporting Actress in a Comedy Series, he mispronounced Hannah Waddingham’s name. Rogen pronounced the Ted Lasso star’s last name as “Waddington,” but the actress had a snappy come back later in the press room: “I’ll have to call him Seth Ragin,” she said.

Many Twitter users loved his “Scooby-Doo” attire, and one said that he was pulling off the “male Velma look perfectly” in his orange suit.

So while Canadians didn’t sweep the Emmys, unlike last year’s epic Schitt’s Creek Emmy haul, we at least had a representative keeping it real for us.