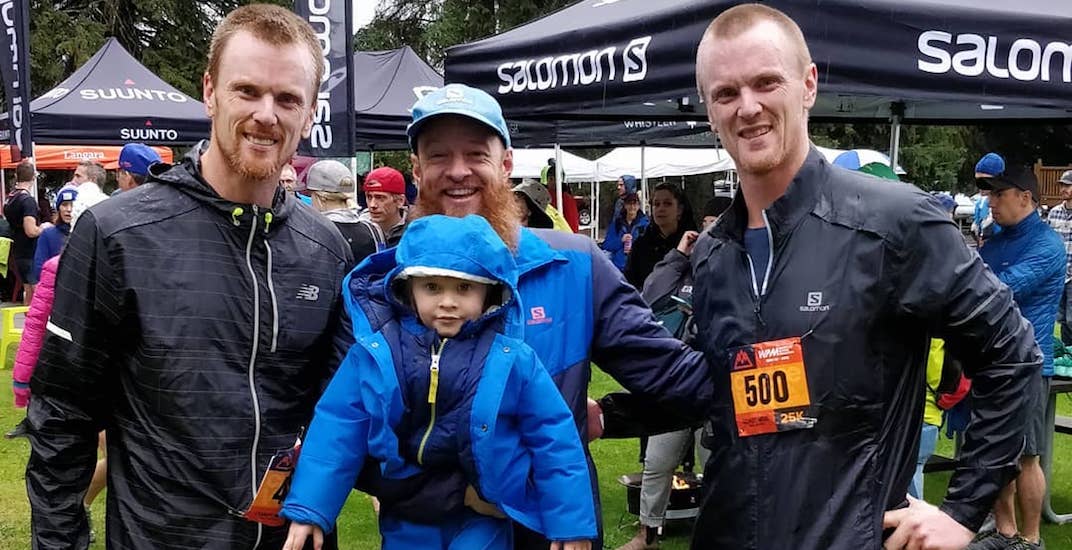 Henrik and Daniel Sedin may be retired, but they’re not done working.

Not participating in an NHL training camp for the first time this millennium, their fitness levels seem to be as high as ever, as the Canucks legends were spotted at the Whistler Alpine Meadows trail race over the weekend.

The twins posed for a photo with trail-running legend Gary Robbins, who has famously put his body through agony in the past, competing in the Barkley Marathons.

Henrik and Daniel have been spotted doing a few athletic activities since they played their last NHL game in April. A month after retirement, the Sedins competed in the 25 km Iron Knee trail race in North Vancouver.

Daniel finished faster than Henrik that day too, by just two seconds.

The Sedins, who will celebrate their 38th birthdays this week, have said that they’re interested in running the 42.2 km Vancouver Marathon next year.

“We like trail races, like running, and mountain biking, so we do that once in a while. We still work out,” Henrik told Daily Hive’s Zain Meghji during the Vancouver Whitecaps’ Legends and Stars charity match last week.

“We work out quite a bit, keep ourselves in shape, but most of the time we take kids to activities, pick them up after school, and make some dinners and lunches,” Daniel added.

Both Henrik and Daniel, along with their respective wives, have decided to keep their families in Vancouver, a city they’ve spent half their lives and where their kids grew up. So you just might run into them on a trail in the North Shore mountains one day.

“The North Shore has lots of trails, you can walk, you run, you can do whatever you want,” Daniel said. “It’s beautiful, quiet – a little bit of wildlife too, so you’ve got to be careful – but it’s a lot of fun.”