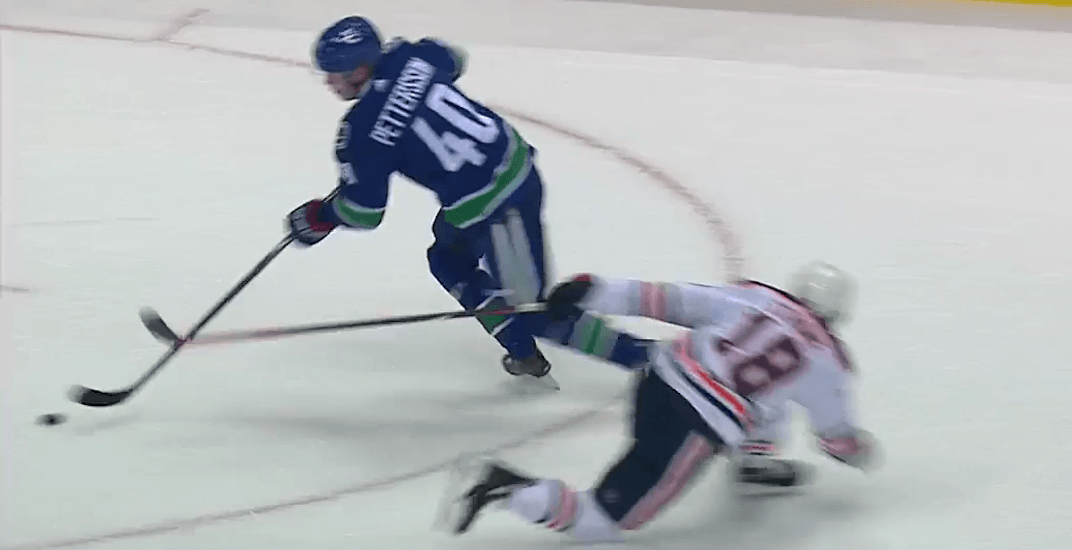 You now have permission to get excited about Elias Pettersson, Canucks fans.

Sure, it was only preseason. Sure, it came against what was essentially an Edmonton Oilers B-squad.

But the 19-year-old stood out for all the right reasons in his first-ever NHL preseason game on Tuesday.

Yes, he’s still rail-thin, but it didn’t matter on this night. Pettersson picked up a lone assist in 16:24 of ice time, but that’s not why he was named second-star at Rogers Arena.

The Canucks’ 2017 first-round pick had fans oohing and aahing all night, beginning with a first-period power play:

He would have picked up his first assist after he made a gorgeous no-look pass to Nikolay Goldobin, if not for an incredible desperation save by Oilers goalie Cam Talbot.

Cam Talbot ROBS Goldobin on the pass from Pettersson#Canucks pic.twitter.com/kcNj93X3DR

Look at that pass by Pettersson tho 😩. #Canucks pic.twitter.com/AVk755Jriv

The play of the night had to be when the young Swede deked Ryan Strome out of his jock strap, while standing still.

Here’s a glorious chance on a partial breakaway in the second period:

Feels like just a matter of time until Pettersson gets his first goal of pre-season pic.twitter.com/Tato83frgq

He didn’t miss by much on this one-timer on the power play:

Let's not lie, we're all here for the Pettersson gifs. #WalkWithElias pic.twitter.com/NlFpcKfKog

The lone visit to the stats sheet came on a third-period power play goal by Goldobin. It was nothing spectacular from Pettersson, who passed the puck down low to Horvat, who hit the post before Goldobin banged the puck in.

Goldobin scores after Horvat rings it off the post

“I was thinking of when I was younger and playing video games, I was dreamed of playing here,” Pettersson said of what he was thinking about while stepping onto the ice for the first time.

Funny, because Canucks fans have been dreaming of a player like him for a while, too.

Nearly half of Pettersson’s minutes came on the power play – a place he’s expected to thrive immediately during the regular season. But nothing negative stood out at even strength either.

Head coach Travis Green played him at centre, between Goldobin and Sven Baertschi, and the rookie held his own. He finished with a faceoff percentage of 50% on eight draws, was fine in down-low coverage, and even caused a turnover after a lost faceoff in the offensive zone late in the game.

The Canucks lost 4-2, but the score was secondary for most.

It’s still just the first game of preseason, so we can’t say Pettersson has ‘arrived’ just yet, but he passed the first test with flying colours.