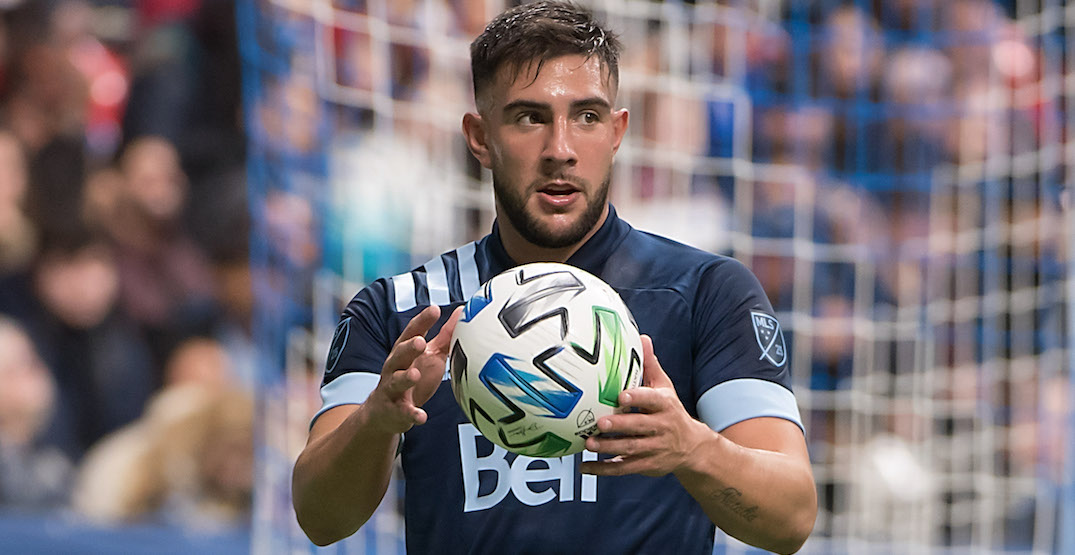 Whitecaps FC kicked off their first day of preseason training camp in Vancouver for the first time in two years today. Head coach Vanni Sartini led a mix of veterans, draft picks, and trialists through a 90-minute session at UBC.

After making the playoffs for the first time since 2017, the Whitecaps have returned a familiar roster. As it stands, versatile defender Tristan Blackmon is the only new player Vancouver has brought it. The Caps have said goodbye to Andy Rose and Bruno Gaspar.

Whitecaps CEO and Sporting Director, Axel Schuster addressed several key topics, including the future of Cavallini, who many assumed had played his last game with the club.

Cavallini was Vancouver’s marquee offensive player heading into last season, but it was summer signing Brian White who led Vancouver with 12 goals.

There continues to be chatter surrounding the exit of Cavallini, who is the Whitecaps’ highest paid striker.

Cavallini earned $1.3 million last season, but injuries and inconsistency hampered his on-field play. In two seasons with Vancouver, Cavallini has scored nine goals and added an assist in 39 appearances.

Schuster has confirmed that clubs have reached out to the Whitecaps with interest in their players.

Does that include El Tanque?

The Whitecaps remain under independent investigation regarding misconduct and abuse allegations against former coaches of the women’s team, Bob Birarda and Hubert Busby Jr.

Birarda case adjourned again, Jan 13 is the new date. Birarda's counsel William Smart described the case to prov court Judge Patrick Doherty as “complicated, for a number of reasons,” and said it is “taking a significant amount of time to deal with the issues." https://t.co/0LZm8JrX6x

Multiple members of the Whitecaps executive team who were placed on administrative leave remain on leave while the investigation is on-going.

“We’ve received a lot of questions and we’ve had to answer them,” Schuster explained. “I think they have received hundreds and hundreds of answers from us. They are not sharing with us where they are.

“We are still under investigation and we are fully cooperating with them. We have given them a lot of material for them to get to a result. Whenever that happens, I don’t know.”

Bikel not coming back

The Whitecaps coaching change resulted in a shift in formation to three at the back, more aggressive counter-attacks and quicker ball movement in the final third. Russell Teibert, Owusu, Caio, and Baldisimo are all options in the middle of the pitch. Janio Bikel was lost in Sartini’s tactics, starting just once in the final eight Whitecaps matches.

“We’re very close to getting an answer and for that reason we allowed him to stay in Europe,” Schuster said of the 26-year-old. “We expect to get it done in the next 24-48 hours. Janio had some issues with the change in system, he was probably the loser of the new system.”

Breaking! Update regarding Janio Bikel. #VWFC are in advanced talks with Serie B side Vicenza over a loan-to-buy deal. Club announced earlier that Bikel is already in talks with the new club. Announcement is expected soon.

Vancouver has invited three players on trial to begin preseason including MLS veteran, Tosaint Ricketts. In 2021 Ricketts started to shift to a role behind the scenes with the Whitecaps, which included an internship with the organization. Ricketts was the driving force behind the Whitecaps new tradition of singing ‘Stand by Me’ with fans following wins at BC Place.

As a member of the Diversity, Inclusion, and Community department, Ricketts continues to be a leading voice behind club initiatives, including Black Excellence Day.

“Tosaint and the club have agreed to a contract,” Schuster revealed. “He will stay with the Whitecaps for a long period of time. If he also stays as a player, that’s something we will find out within the next (few) weeks. We want to keep him as a very important employee of the club in an important role.”

We unite with our fellow @MLS clubs in sharing the message to stop hate and spread love on Martin Luther King Jr. Day.

The Whitecaps will begin the 2022 season at Columbus Crew SC on February 26, with the home opener on Saturday, March 5 against 2021 MLS Cup Champions, New York City FC.