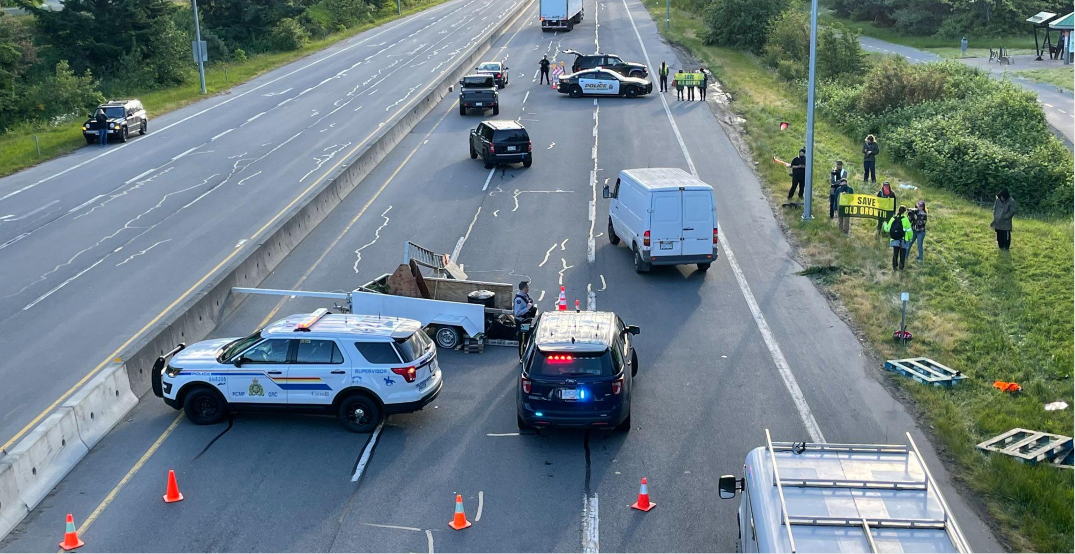 The man who was injured at the centre of a Save Old Growth protest on the Pat Bay Highway last week has put out a statement, and he wants to invite the man responsible over for dinner.

Trevor “Red” McKelvie sat on top of a ladder during a demonstration that stopped traffic on the highway.

Alongside other protesters, the 26-year-old McKelvie was taking part in the demonstration to push the BC government to do more to protect old-growth forests. The demonstration angered a driver so bad that the driver ended up damaging one of the ladder supports, and McKelvie shattered his pelvis after falling 15 feet onto the pavement.

In the statement put out by Save Old Growth on behalf of McKlevie, he claims he has no ill will towards the driver and hopes “the incident hasn’t negatively affected his life.”

“I’d like to invite him over to have a discussion and hear his perspective over dinner with me and some other Save Old Growth members.”

He also says he’s doing better on day seven of his recovery.

“These days have been a struggle but I’ve had lots of support through the different communities I’m involved in and I’m incredibly grateful for this. My doctors have said it will be a year of rehab and that I may have long-term complications.”

McKelvie adds that even though he has been in pain, he doesn’t regret standing up for old-growth forests.

“I fully believe we can be better stewards and we’d gain much as a result. I know many feel upset about what we do, including the driver who damaged the structure. But the last remaining old-growth must be preserved. And our focus must shift to increasing the health of our second growth through biodiversity if our forestry is to thrive in the coming decades.”

McKelvie acknowledges that the injury will cause his role to change a bit. He won’t be climbing any ladders any time soon.

You have to admire McKelvie’s patience. Would you invite someone over to dinner if they left you with a shattered pelvis? Let us know in the comments.

An old-growth protester is in serious condition after highway demonstration goes awry.