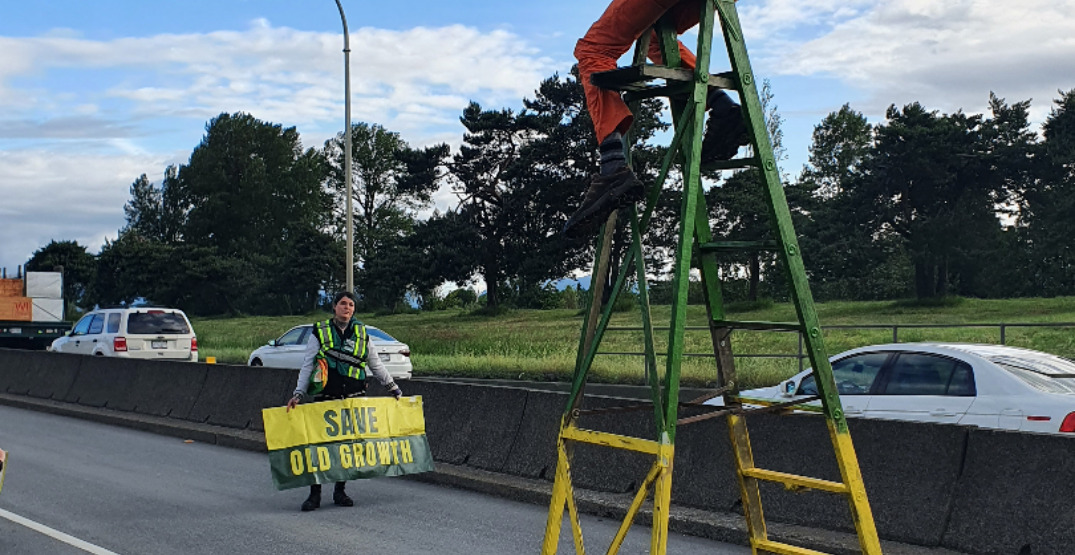 In recent weeks, there have been countless stories related to Save Old Growth protesters blocking key roadways in BC to urge the government to do more to protect old growth forests.

Now, another group is standing up in the face of Save Old Growth and its aim is to give a voice to anyone impacted by the blockades.

The group is called Clear the Road in BC, and Daily Hive spoke with its creator about what the group hopes to achieve — including a potential lawsuit.

Tamara Meggitt also highlighted some key actions from protesters that gave her cause for concern ever since the protests started.

“The last highway blockade on the Malahat was the final straw. There we saw a metal barrel filled with cement and activists hands locked inside of it.”

“As a parent that was gut-wrenching to see.”

She described other events she witnessed which involved people jumping in front of traffic, or holding people for hours, and called them “extremely dangerous tactics and criminal activities.”

Clear the Road is also taking aim at Zain Haq.

Who is Zain Haq?

Zain Haq is an SFU student currently in BC on a student visa, according to Clear the Road.

He’s also the leader of SOG and has been arrested 10 times since 2019.

“Over my dead body will the provincial government be allowed to destroy the last remaining old growth forests,” reads a quote attributed to Haq in a SOG Instagram post.

In a recent video posted to the SOG Facebook page, Haq refers to the recent actions as a “final push” to get the government to pass legislation to ban old growth logging. Haq claims that the government can’t afford to allow these disruptions to continue, which will in turn force them to submit to the SOG demands.

Daily Hive asked Meggitt if she believes in protecting old growth forests, and she said that there absolutely needs to be some saved.

“We believe in common sense fact-based solutions. Within everything in life there is balance to be found. I do not know a single forestry person that wants to cut every last tree.”

Clear the Road has proposed the idea of a class action lawsuit against SOG.

Meggitt said that the idea is “not about forestry, just as these blockades are not about the environment.”

“This is about the delivery driver that can’t deliver goods to their customers. This is about the patient missing a medical appointment because they can’t get to a ferry. The business who barely survived a pandemic and now has lost more income as a result of the blockades.”

She adds that it’s about holding lawbreakers accountable for their actions.

On that note, a few of the lawbreakers were held accountable for their actions.

Vancouver Police revealed that three alleged protesters were criminally charged following a blockade on the Ironworkers Memorial Bridge… They were charged with mischief.

“They were released from custody after attending court and agreeing not to deliberately block or impede traffic on any roadway in BC,” said police.

Two more protesters are due back in court at a later date.

Daily Hive has reached out to SOG for comment.