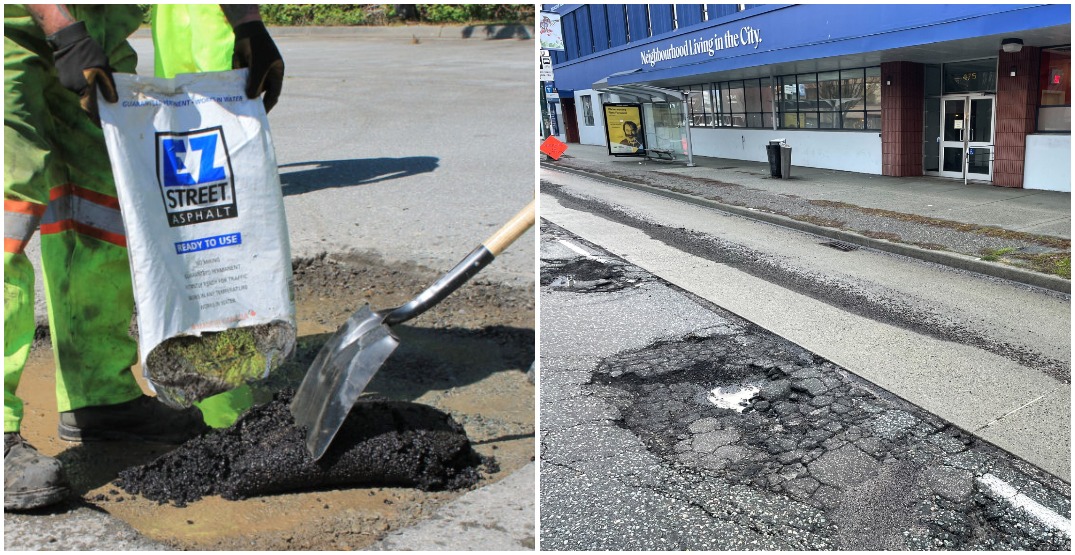 The frigid cold snap and the return to more seasonal temperatures has caused a big increase in the number of potholes around the region.

Road crews have been kept busy as more and more potholes have been appearing — especially on busy arterial routes.

She adds that potholes are caused by regular freezing and thawing during seasonal changes and usually occur on older road surfaces. 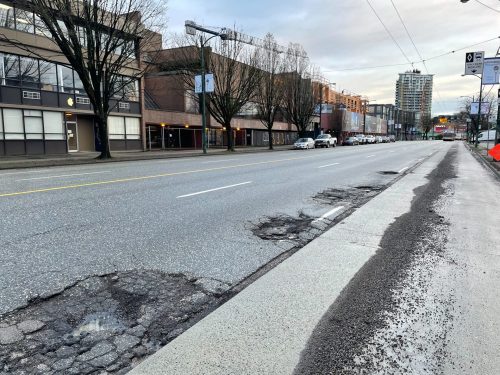 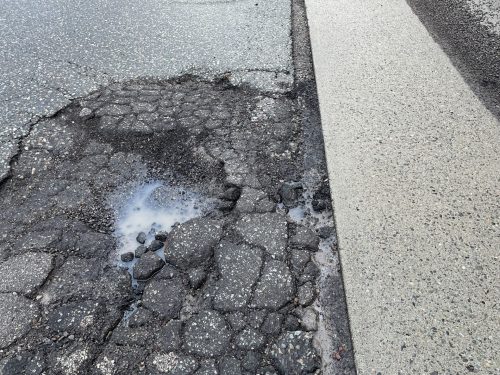 Kyle van Veen, Acting Director, Public Works in the City of Coquitlam, told Daily Hive Urbanized in an email that “the ground is frozen quite deep from the extreme cold we had and, as it thaws, moisture starts to come out, which can break up the asphalt in the process.”

He added, “Once a report is received, crews are dispatched to assess the damage and will repair immediately if the issue is actually a pothole. Repairs can vary from spot repairs to patching of areas in the case of more widespread damage, which is typically undertaken when weather conditions improve. In the case where more widespread patching will be undertaken, temporary repairs to make the situation safe will be performed until the permanent repairs can be completed.”

Matt Brown is the Streets Manager of Central and Traffic Operations for the City of Surrey, and says they are having a bit of an early start to pothole season.

“It depends on the winter. We had winter kind of earlier than our typical. We started in early December. We had multiple snowfall events and lots of subfreezing temperatures, so potholes are a little early this year. We usually see them mid-February, early March, but it really depends on when the weather hits us.”

He says the City does a bit of a temporary fix, or a cold patch, right away and then a more permanent repair is done when the weather warms up, a bit later in the year.

Brown adds hundreds of pothole reports have come in so far this year and they are most common in heavy traffic areas.

Mainroad Contracting, a government contractor, has also been kept busy with pothole repairs this year.

Mainroad crews are out on the roads making them safer for the travelling public by repairing potholes with @EZSTREETASPHALT!

Please drive with caution, slow down and watch for crews working roadside ~ thx for the brake!🙏🏼 #ConeZoneBC pic.twitter.com/u59gN9z4d8

The City of Mission tweeted Wednesday that it had to shut down part of the Mission Bridge for pothole repair.

Ministry of Transportation and Infrastruture has notified that the Southbound lane of the Mission bridge will be closed until 4pm today for pothole repair. Please use caution and reduce speeds in workzones. For the latest up to date information follow @DriveBC pic.twitter.com/ef9mukaCWa