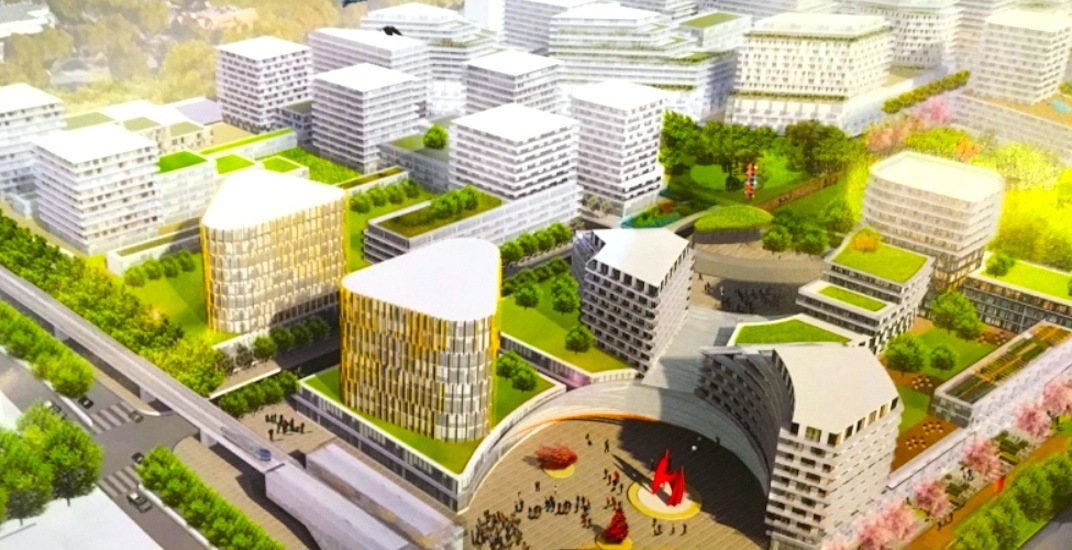 A proposal to completely demolish and redevelop Lansdowne Centre is progressing to an official application stage with the City of Richmond.

Shopping mall owner Vanprop Investments is seeking to amend the municipal government’s approved Official Community Plan (OCP) as part of its process to create a master plan for the sprawling 50-acre property framed by No. 3 Road to the west, Alderbridge Way to the north, Kwantlen Street to the east, and Lansdowne Road to the south.

The redevelopment calls for a total of 24 mid-rise towers, reaching a height of no more than 154 ft, with podiums. This includes 22 residential towers and two office towers with a total floor area of over six million sq. ft., creating a floor area ratio (FAR) density of 2.77 FAR.

There will also be other mixed uses such as retail and entertainment space on the lower floors, and a significant community amenity building of about 53,000 sq. ft. on the corner of Lansdowne Road and No. 3 Road next to the SkyTrain station. 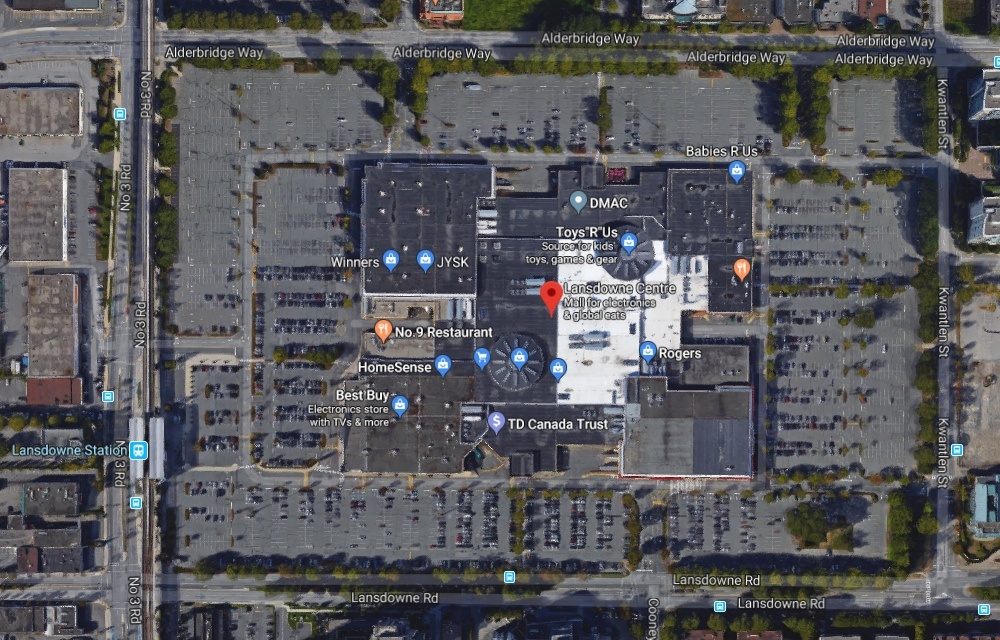 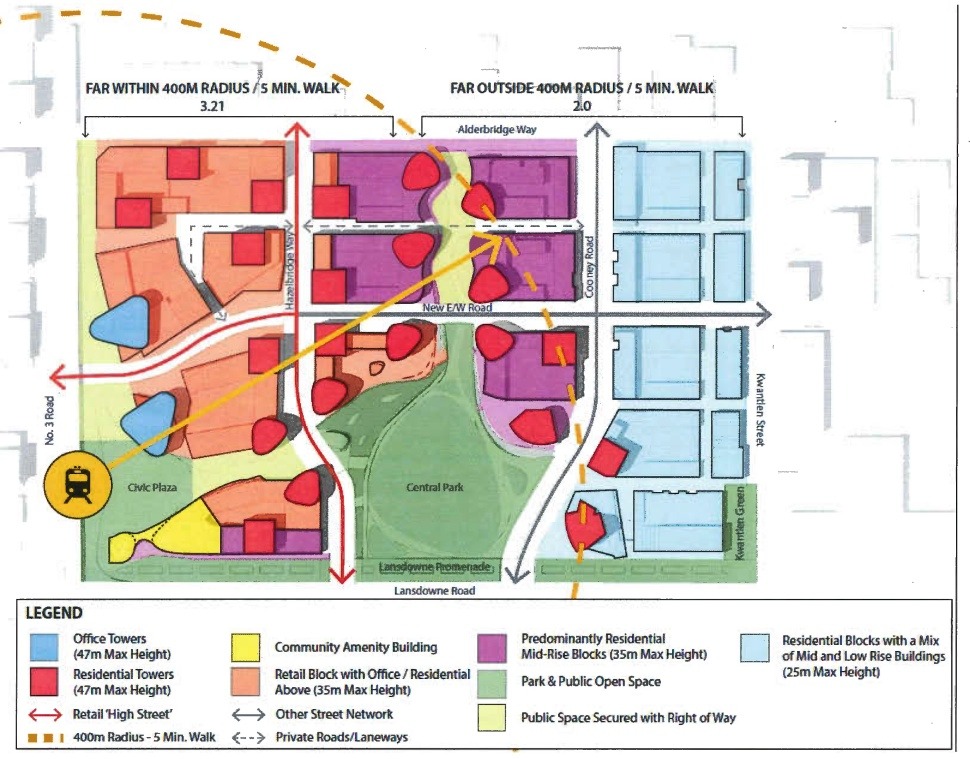 Approximately one-fifth of the overall size of the site will be dedicated for a public park, and the proponents’ recent application to amend the OCP is limited to changing the orientation and shape of this developer-funded park.

The 10-acre public park, which will be owned by the City, would include a strip that stretches along the length of Lansdowne Road from No.3 Road to Kwantlen Road. At its core will be a major central park, bound by public roads, with plaza space and large open grass areas ideal for large events and festivals.

There will also be a major civic plaza next to the community amenity building and SkyTrain station.

On the eastern side of the site, a smaller green space oriented towards Kwantlen Polytechnic University will be created as a space for smaller community events.

City streets will be extended through the site to establish a new street grid, with Hazelbridge Way becoming a new ‘high street’ for retail. 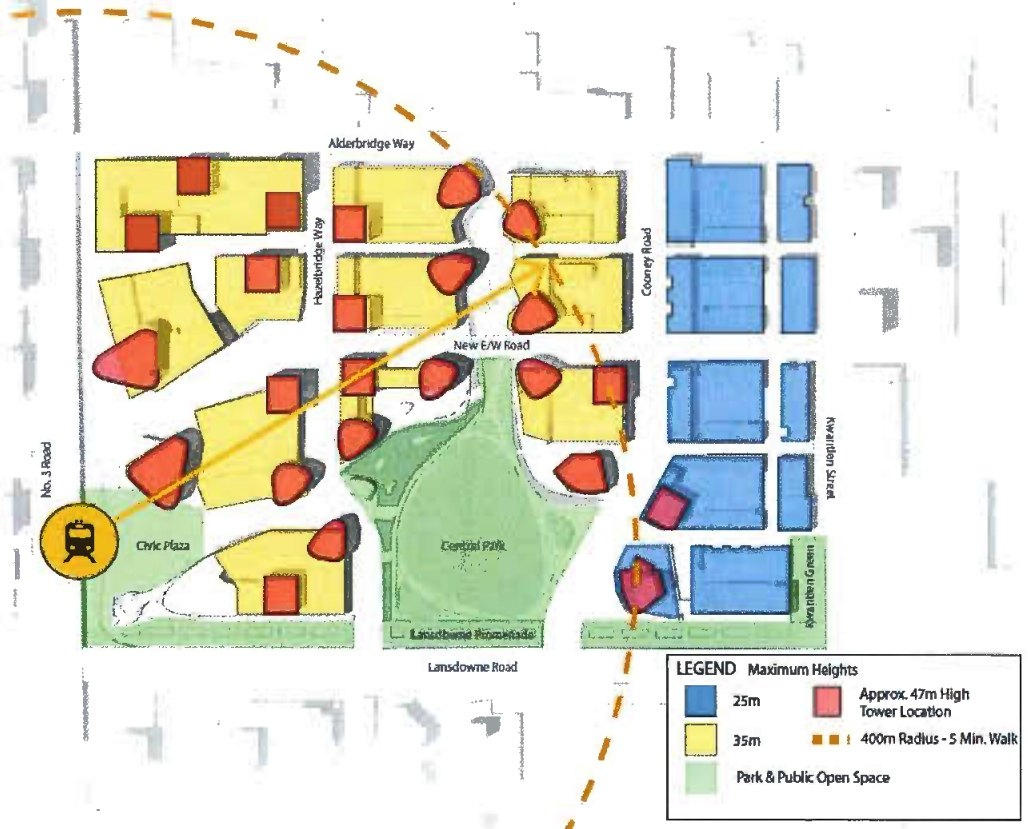 About three quarters of the project’s total density will be on the western half of the site, where the retail space will be located. The tallest buildings will be near No. 3 Road.

But the placement of the tallest buildings on the western portion of the development, closest to Vancouver International Airport, could be an issue. A City staff report outlining the proposed OCP changes indicates that the airport’s proposal for a fourth additional runway would result in new height restrictions on the Richmond City Centre area, which includes the Lansdowne Centre site.

Public consultation for the redevelopment will begin in early 2018, and any construction – subject to City approvals – is unlikely to begin until the 2020s.

“I think it’s a good time to proceed with the project. What really helps make this a community to develop is the arrival of SkyTrain’s Canada Line, with Lansdowne Station at our doorstep.”

Additional redevelopments are primed for the No. 3 Road corridor along the SkyTrain route, especially at the future site of Capstan Way Station.

Lansdowne Centre was completed in 1977 on the site of a horse racing track. It currently has 120 stores, including anchors such as Best Buy, Toys ‘R’ Us, Winners, and HomeSense. Much of the site is currently used as a ground-level parking lot.