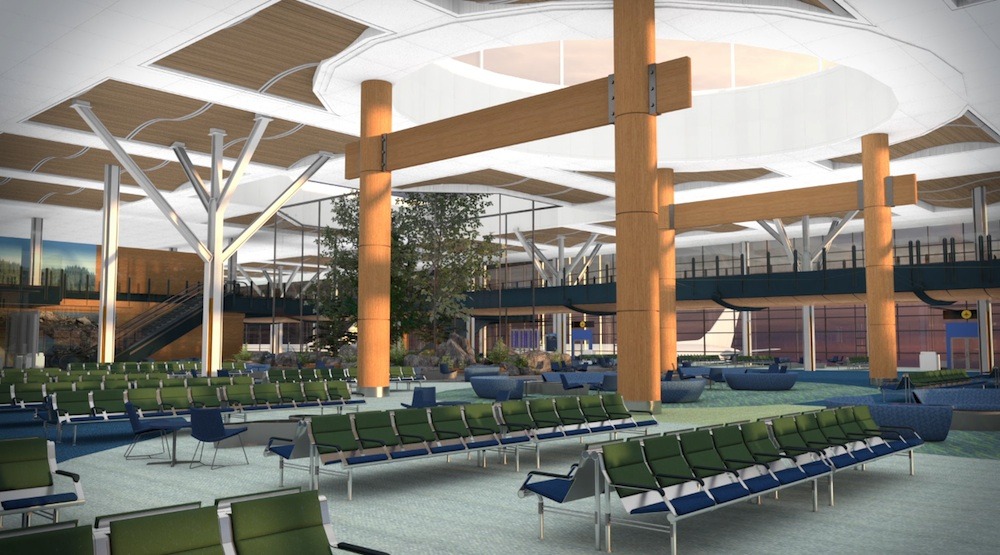 A new wave of terminal and taxiway expansion projects planned for Vancouver International Airport (YVR) over the next 20 years promise to be the airport’s most transformative undertakings since the 1996 construction of the international terminal.

After exploring 57 different terminal and taxiway configurations for over a year and completing a public consultation phase last fall, sweeping plans of the ambitious $5.6-billion expansion dubbed ‘Flight Plan 2037’ were unveiled by Craig Richmond, the President and CEO of the Vancouver Airport Authority, during a Greater Vancouver Board of Trade meeting of local business and aviation industry leaders.

There will be another phase of public consultation lasting through mid-February before the plan is sent to the federal government for final approval.

The expansion is needed to accommodate record-breaking passenger growth given that YVR could hit 25 million annual passengers, which happens to be the terminal’s existing capacity, before the end of the decade.

Ultimately, a more incremental, piece-meal approach of gradually expanding the terminal based on demand and economic conditions was chosen. New terminal building wings will be added over the next two decades instead of building a major new terminal expansion all at once.

All existing piers will be extended with additional gates, passenger facilities and amenities.

“While any one expansion might cost $200 million or $300 million, we are not gambling on a $1 billion or $2 billion expansion, which is very uncomfortable when the economy goes south and you are halfway through,” said Richmond. “For the passenger it means still one terminal, all interconnected, with the shortest possible distance between the gates, with linked baggage systems and easy connections between sectors. It also allows us to centrally locate some new services.”

Construction is expected to begin later this year on expanding Pier D, the international wing, which will have the ability to handle wide-body aircraft like the Airbus A380. Artistic renderings show an evolution of YVR’s unique interior design, with wood elements and Earth tone colours that expose a BC theme. 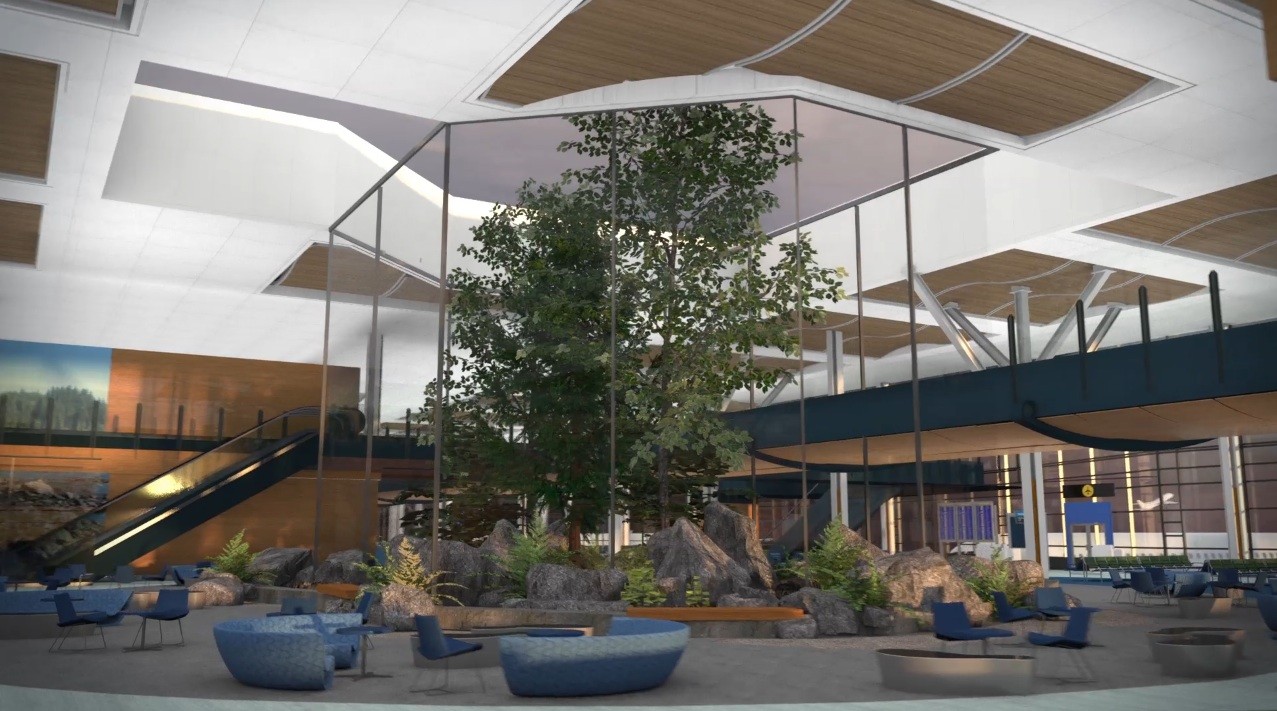 “It keeps on board with our theme, a BC sense of place, keeping First Nations art, nice cool colours, warm textures, and wood,” he said, adding that designers fulfilled one of the requests from the latest consultation: “Could you bring more of the outside inside?”

One of the biggest highlights in the Pier D expansion is a ‘Gulf Island’ with real trees and vegetation in the middle of the terminal next to an area with gates. While this area is sealed in by floor-to-ceiling glass, the area is not roofed and exposed to the elements, meaning rain and snow will come down into the centre of the terminal.

Richmond adds that the Airport Authority is working on incorporating iconic BC restaurants and bars and amenities into Pier D.

Another terminal expansion to be completed within the foreseeable future will create Pier F, which expands the US transborder terminal eastwards.

“It extends from where the hotel is,” he said. “We’ll get rid of the 20-year old temporary barn that people are using now. We’re going to make that modern and gain four gates from the initial improvement, but we’re also going to improve the transborder experience from security to customs.”

Other terminal options such as an infield satellite terminal west of the existing terminal, which would require tunnels for access, and a mega ‘East Option’ terminal expansion identified in a previous master plan will still likely happen once the more incremental expansion options are exhausted, but this is not expected for several decades.

“I should point out that eventually, someone’s granddaughter in the audience may be the CEO one day who has to expand that way, but that is several master plans away,” said Richmond. 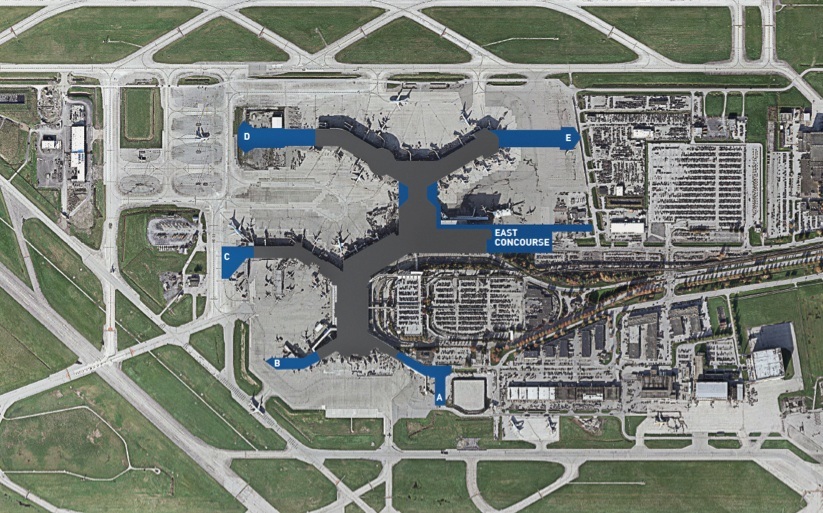 The chosen option for the next 20 years: The terminal will be ‘expanded from the centre’ with new wings added to all of the existing piers. (Image by: Vancouver Airport Authority) 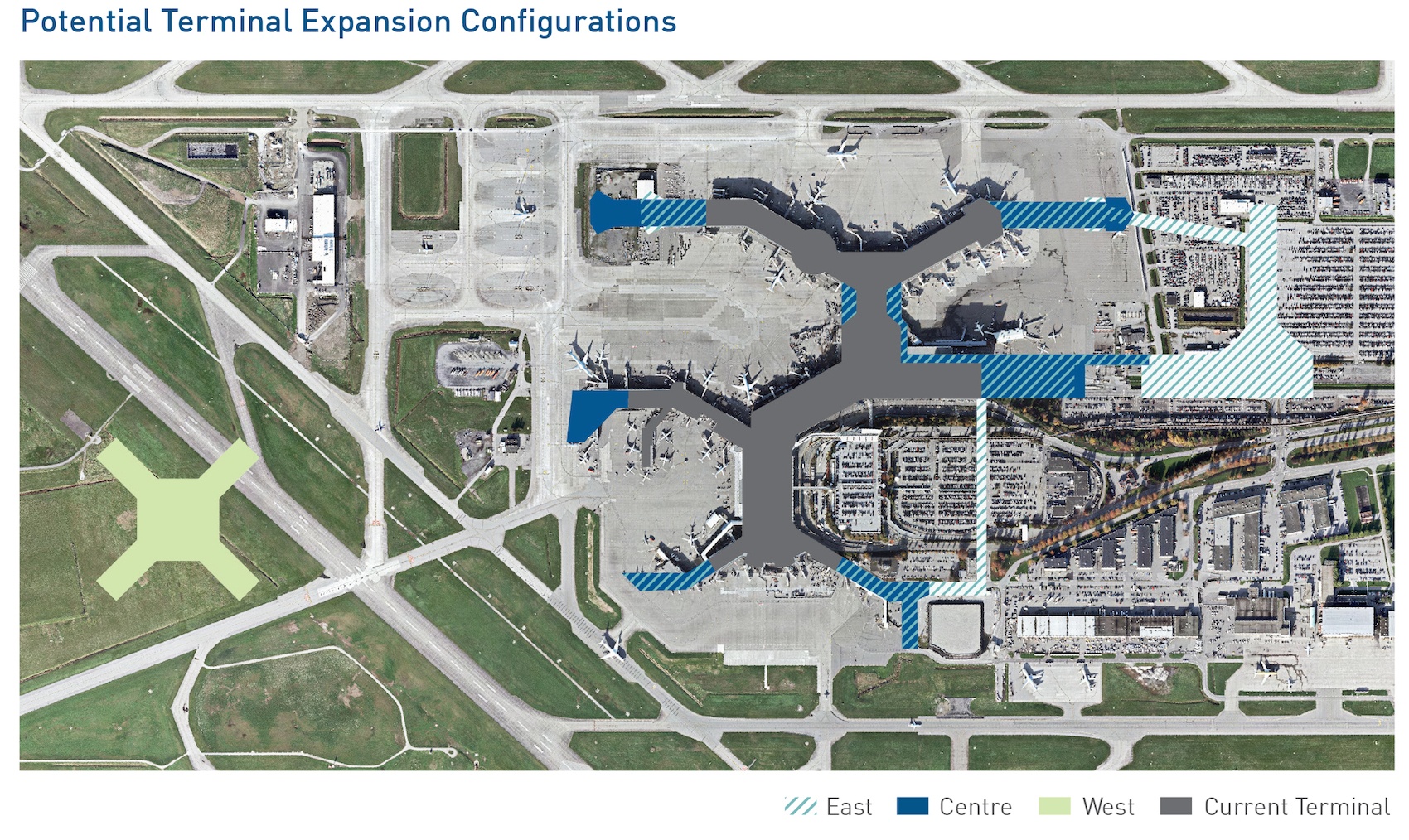 The expansion options of a West satellite terminal and a new East terminal will be retained for the future. (Image by: Vancouver Airpot Authority)

New elevated taxiway, but no new 4th runway yet

A new elevated north-south aircraft taxiway over Grant McConachie Way that starts from the eastern ends of the North and South runways will significantly cut down the taxiing time for aircraft traveling from the US transborder terminal to the eastern end of the South Runway. Aircraft will only have to travel a distance of approximately 1.5 kilometres instead of taxiing around the terminal over a distance of four kilometres as they currently do.

“Right now it is a bit of a horseshoe, but it will make it a circle [for taxiing],” said Richmond. “It is very good for the aircraft and air traffic controllers.”

“The savings in emissions will be huge. This could be the first taxiway ever built by an airport just to reduce greenhouse gas emissions.”

Construction on the elevated taxiway could begin in the early 2020s. 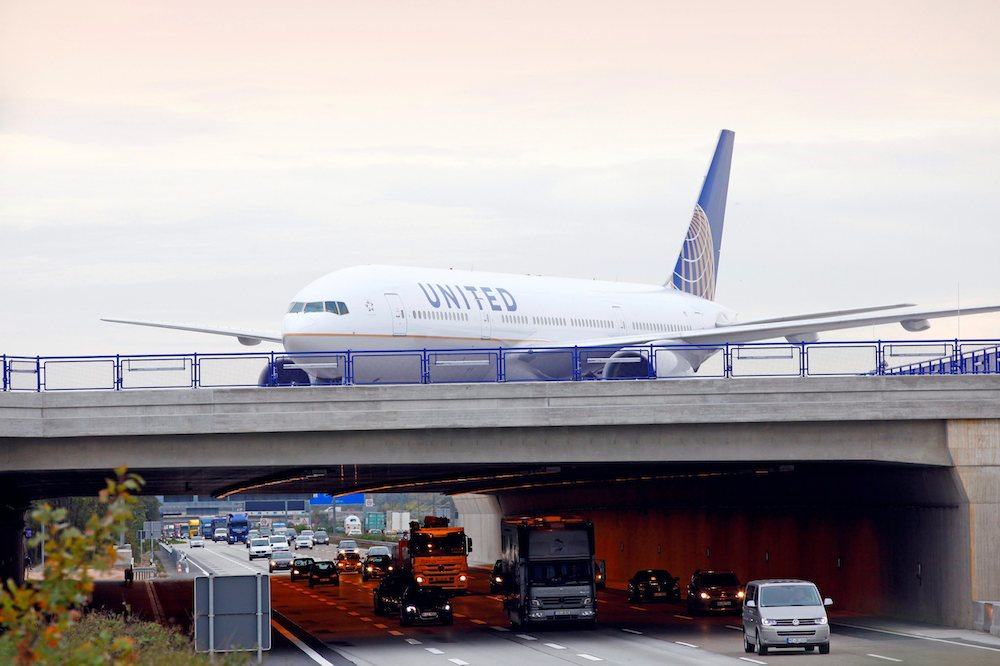 Example of an elevated taxiway over a roadway at Frankfurt Airport. (Photo by: Fraport)

To further increase airfield capacity, the Airport Authority plans to build parallel taxiways and more aprons. Altogether, there will be up to $500 million in airside improvements.

However, at the moment, there is no need to build a fourth runway as even though passenger numbers will soar, aircraft traffic is projected to stay relatively flat for the next few decades.

“Bigger airplanes [will be] flying more full, which is a fantastic story,” he said. “It’s good for us, it means the airside or air space isn’t going to get crowd. It’s good for the community as emissions will stay relatively low.”

Two options have been considered for the fourth runway: a Foreshore Runway on the eastern side of Sea Island that involves extensive land reclamation running into the Strait of Georgia or a runway on existing land on the south end of the island that is parallel to the South Runway.

The Foreshore Runway provides substantially more capacity, but is much more expensive – likely billions of dollars – and complex. Environmental assessments and various levels of approvals could take 10 to 15 years for this option that fills in the sea.

With the South Parallel Runway, it is less costly and complex and environmental approvals would likely be easier, but it offers significantly less capacity due to its shorter length.

But there could be an eastward extension of the existing North Runway to make it the same length as the longer South Runway. 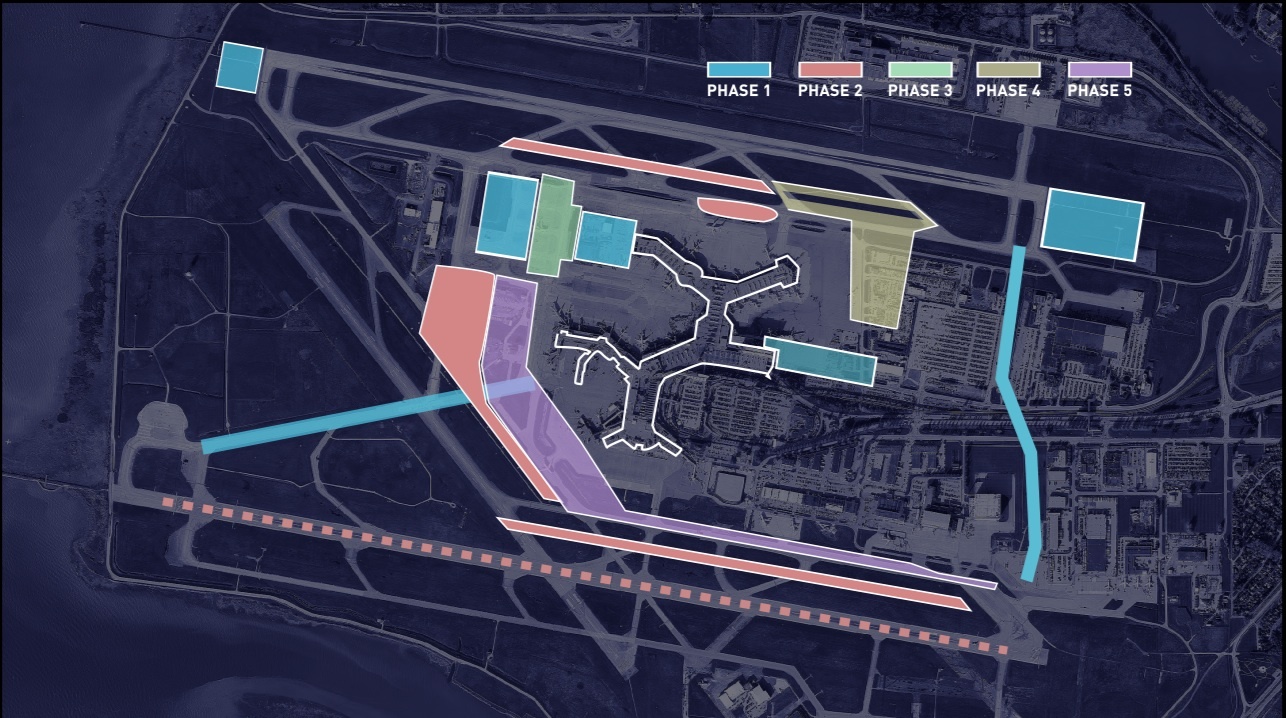 Chose multi-phase expansion plan for YVR Airport under the master plan for the next 20 years. (Image by: Vancouver Airport Authority) 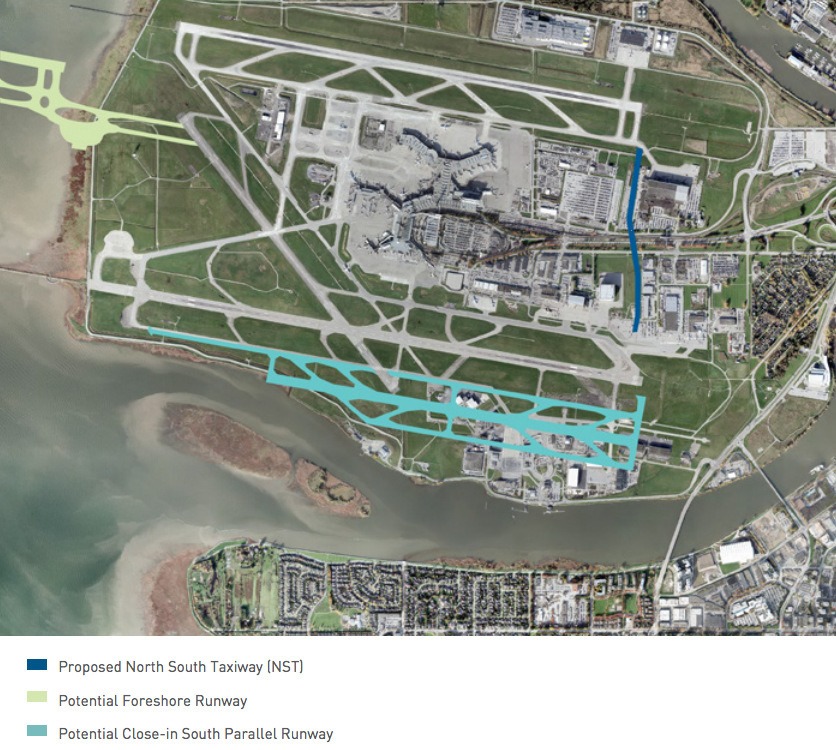 There has been a major modal shift in the number of people who take public transit to YVR to the degree that 25% of all people – both travelers and workers – now use public transit, with 20% using the SkyTrain Canada Line and 5% using transit buses. With these numbers, YVR has some of the highest transit ridership in the content, and it more than doubles the 10% transit ridership at Toronto Pearson International Airport – the only other airport in Canada connected to a rail rapid transit service that leads to the city centre.

In an interview last year, Richmond told Daily Hive that it could reduce overcrowding at YVR Airpot Station by building another platform area on the opposite side of the station’s single track. Similar to the SeaBus ferry terminal platforms, this configuration would allow passengers to embark and disembark the train from both sides of the train.

But with the projected growth in passenger traffic, there is still a great need to expand road capacity in and out of Sea Island.

“We want to continue to increase ridership on the Canada Line, but we know that many of our 35 million passengers of the future will still need to park and rent or share cars, said Richmond. “In doing our very detailed modeling… we were somewhat surprised that ground access in the next decade is going to be our biggest problem.”

There could be a priority lane to the airport on Russ Baker Way and an elevated freeway-style interchange to replace the light-controlled intersection at Templeton Street and Grant McConachie Way.

To support those who are traveling or leaving the airport by car, another major multi-level parkade will be built immediately east of the existing parkade. Eventually, this new parkade will incorporate a new ground transfer facility for buses, taxis, and self-driving cars to drop-off.

And immediately adjacent to the new parkade will be a new geothermal plant to replace the aging old plant that has reached the end of its lifespan. With 1,600 wells, the new geothermal plant will heat and cool the terminal building and consist of a new electrical backup building housing large generators and YVR’s data centre. If it receives final approval this year, the geothermal plant could be completed in 2021.

Richmond said all of the expansion and improvements outlined in the master plan can be synthesized into 75 major projects with a total cost of $5.6 billion over the next 20 years.

“It’s financially conservative and operationally prudent,” he said. “If the numbers come faster, we’ll be ready because we don’t want crowding and stress. If slower, we won’t overextend.”

“This is financially achievable if we hit just the 50th percentile of passenger traffic.”

Currently, YVR is at 88% of the terminal’s current design capacity of 25 million passengers per year.

Richmond stressed that YVR is fully self-supporting and does not receive any sort of funding from any level of government. As of last year, 48% of its revenues were from non-aeronautical sources such as shops and restaurants in the terminal and parking. In fact, YVR has the highest retail and food and beverage spend per passenger in North America.

Other non-aeronautical revenue sources include McArthurGlen Vancouver Airport Outlet, which YVR partially owns, and the YVR division responsible for designing and building the Border Xpress automatic passport control kiosks. To date, YVR has sold over 1,000 of these kiosks to dozens of other airports in North America.

A recent spike in non-aeronautical revenue has allowed the Airport Authority to slash fees to airlines by 15% as a means of encouraging existing and new airlines to introduce new routes. This is one of the primary factors for YVR’s record consecutive year-over-year passenger growth.

One other major source of revenue for the airport’s expansion projects is the Airport Improvement Fee charged to passengers.

And in the process, the airport will incur more debt, but Richmond contends that YVR has “the headroom to increase it” given its high credit rating, to the extent that it is “one of the world’s most credit worthy airports.”

The public can provide input to YVR’s ‘Flight Plan 20337’ master plan at www.yvr2037.ca during this third phase of consultation lasting until February 20. An open house will also be held from 5 pm to 7 pm on February 8 at the terminal building’s Graham Clarke Atrium.