An ambitious redevelopment project will remodel Lougheed Town Centre and its immediate vicinity into one of the Metro Vancouver region’s largest town centre areas.

The City of Burnaby is currently seeking public input for its draft of the Lougheed Town Centre Core Area Master Plan, which covers a large 41-acre site bordered by Cameron Street to the north, Lougheed Highway to the south, Bartlett Crescent to the west, and North Road to the east.

Most of the master plan’s area is occupied by Lougheed Town Centre shopping centre, the very core of the future dense neighbourhood, with the former Sears warehouse site and commercial properties on the perimeters. The main proponent of the area’s redevelopment is developer Shape Properties, which owns the sprawling shopping mall site.

Most of the project’s tallest towers and office space will be clustered near SkyTrain’s Lougheed Town Centre Station.

Altogether, these buildings could consist of a total of 11,000 residential units over 11.1 square million of floor area, giving the redevelopment a residential density of 5.0 FSR. Tower podiums and commercial-only buildings will hold 12.86 million square feet of retail, commercial, office, and entertainment space.

“The Master Plan then takes into consideration appropriate development densities and building forms,” reads the report.

Much of the redevelopment’s retail shops and restaurants will be found along an impressive 320-metre-long covered outdoor pedestrian-only Spine, a galleria that will effectively become the replacement shopping centre, that runs north to south in the centre of the development. A wall of podium buildings with a height of approximately 60 feet will line the weather-protected Pedestrian Spine.

Rendering of the galleria-like pedestrian spine. 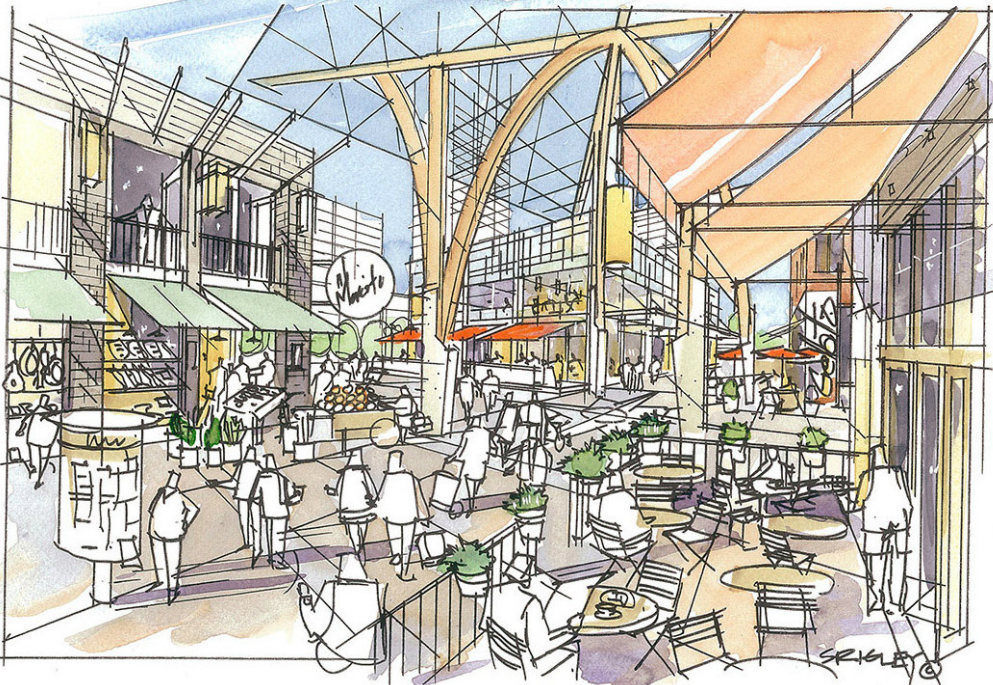 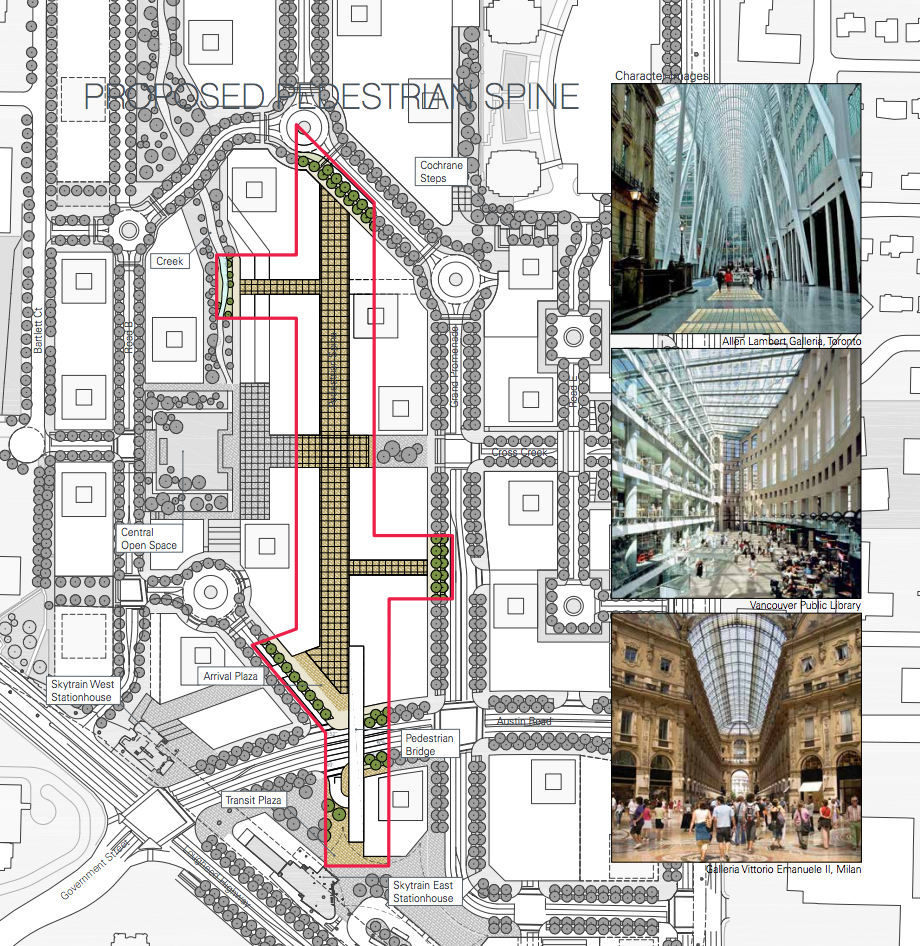 Elevated pedestrian footbridge over Austin Road from the Transit Plaza to the Pedestrian Spine. 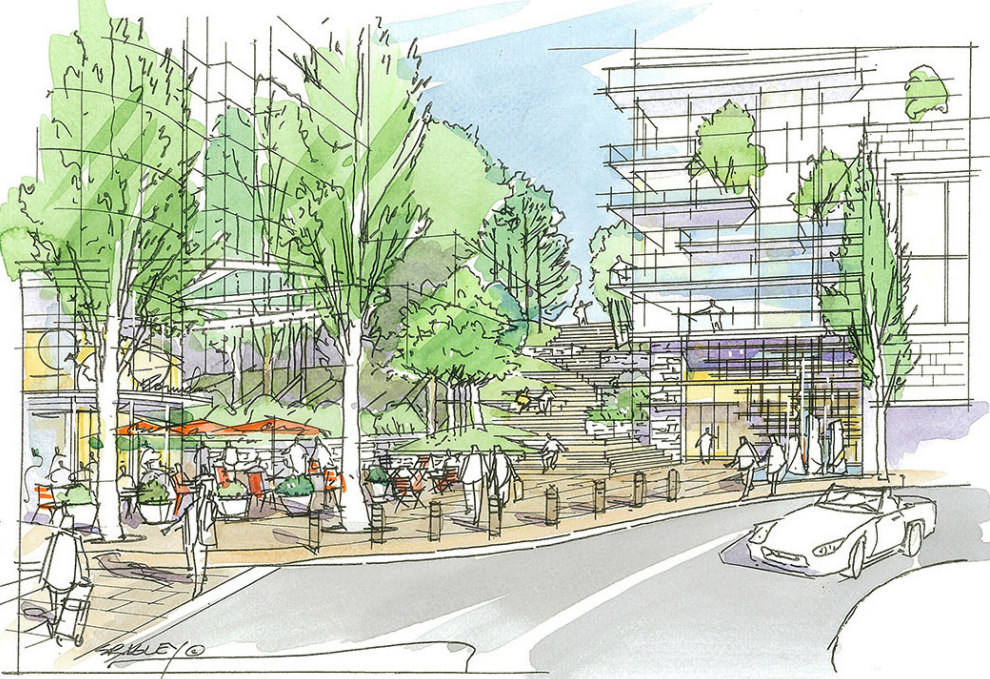 The Pedestrian Spine is directly connected to the Transit Plaza – the SkyTrain station and bus exchange – by an architecturally-designed elevated pedestrian footbridge over Austin Road. The Transit Plaza will be weather-protected with a landmark roof and feature aesthetic water installations, landscaping, and public art to provide the area with a further sense of place.

There will also be a strong retail presence along the north-south Grand Promenade, which also starts at the Transit Plaza. It is designated as the neighbourhood’s main “festival street” given that it will have the capability to host events like street festivals, farmers markets, parades, and night markets. 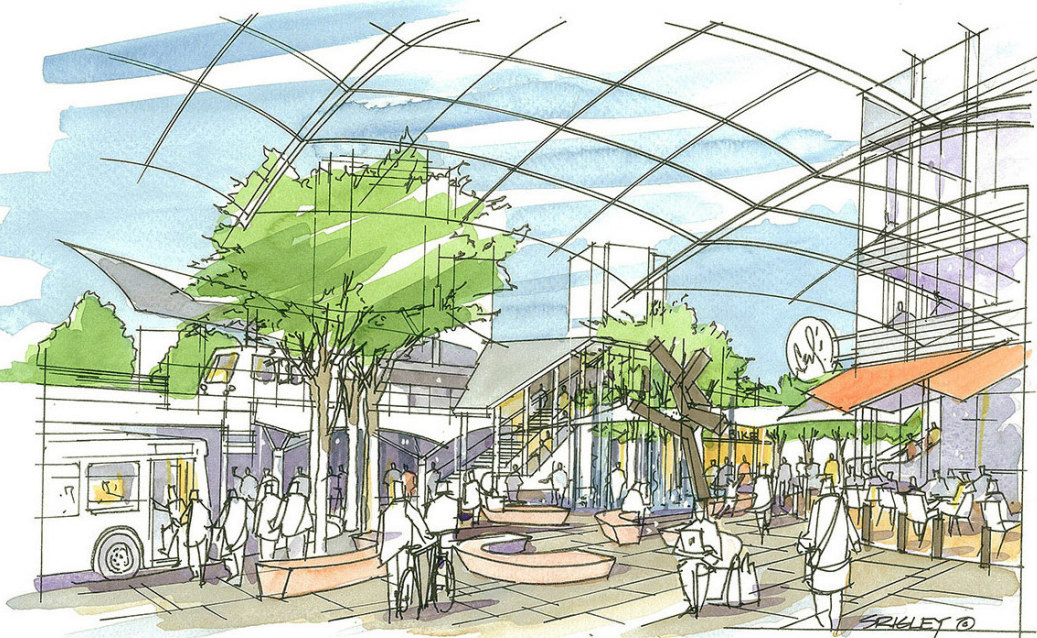 Some retail will be found along Austin Road, which is designated as a pedestrian high street, and a redesigned North Road with landscaping on the eastern perimeter of the development site.

The area’s main east-west connector will be Cross Creek, a pedestrian-friendly route that stretches from North Road to Bartlett Court, through the Grand Promenade and pedestrian spine. A significant amount of open space will flank the Cross Creek area.

The neighbourhood’s largest public spaces will be a 1.6 acre centralized area, the Central Open Space, that serves as both a civic park and urban plaza capable of hosting large events such as civic and cultural celebrations, concerts, sport watching events, and festivals. City planners say this space could potentially accommodate 10,000 people for special events. 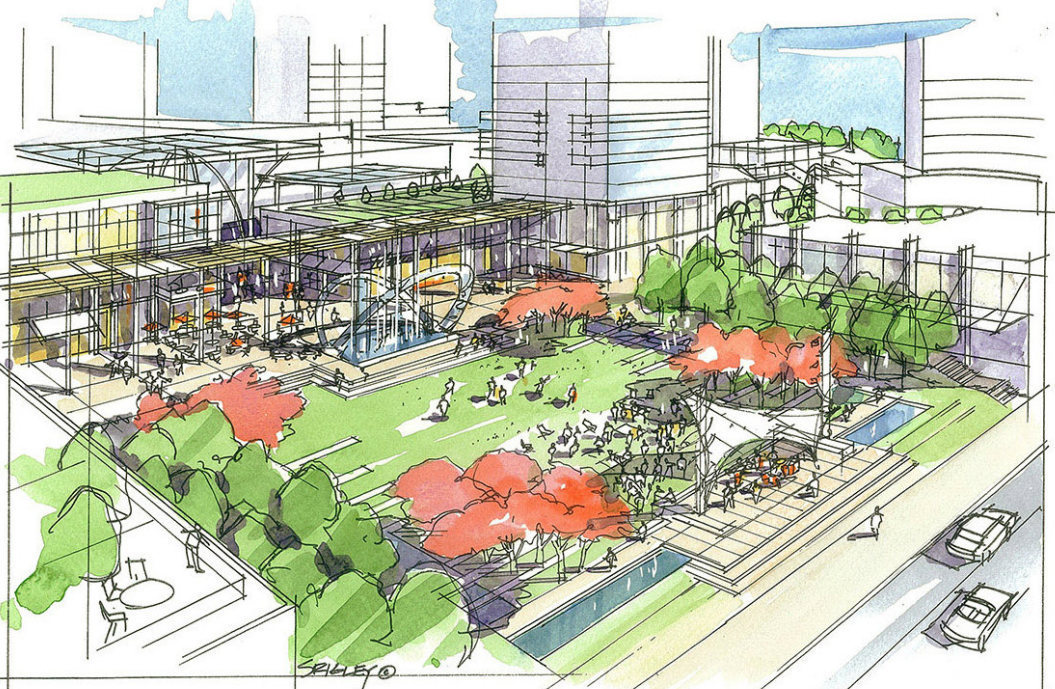 A number of other public spaces will be scattered across the area, including: Creekside Open Space, a linear waterway and greenway that pays homage to the area’s Lost Creek; terraced pocket parks along North Road; and Cochrane Steps, a series of steps that celebrates the area’s sloping topography.

The entire development and its public spaces will be connected by a network of pedestrian-only and cycling pathways and pocket open spaces.

“The Master Plan proposes a diverse range of neighbourhood experiences and public realm characteristics, ranging from active urban spaces to more natural, contemplative spaces. A common aspect of these public spaces, however, is their connectivity to the surrounding areas, inviting the broader community to help build and develop a truly special sense of place within the Core Area,” the report continues.

The project will be built in three separate phases, beginning with the existing parking lot located on the northwest corner of Austin and North roads over the next five years.

When fully complete, the area is expected to employ at least 5,200 people and provide living spaces for up to 20,000 people.

The redevelopment has been slated for years and recent work on planning and the rezoning phase have been buoyed by the Evergreen extension of SkyTrain’s Millennium Line to Coquitlam, which will further enforce Lougheed Town Centre Station as a major regional transit hub.

Five stations away on the Millennium Line, construction is well underway on the first phase of the Brentwood Town Centre redevelopment, another Shape Properties project. Approximately 6,000 residential units, within 11 residential towers, and 250 stores and restaurants over 1.1 million square feet of retail space are planned for the 28-acre shopping mall site.

Other major redevelopment projects planned or under construction in Metro Vancouver include Station Square next to Metropolis at Metrotown, Lansdowne Mall in Richmond, and Oakridge Centre in Vancouver, which was recently downsized due to geotechnical issues. 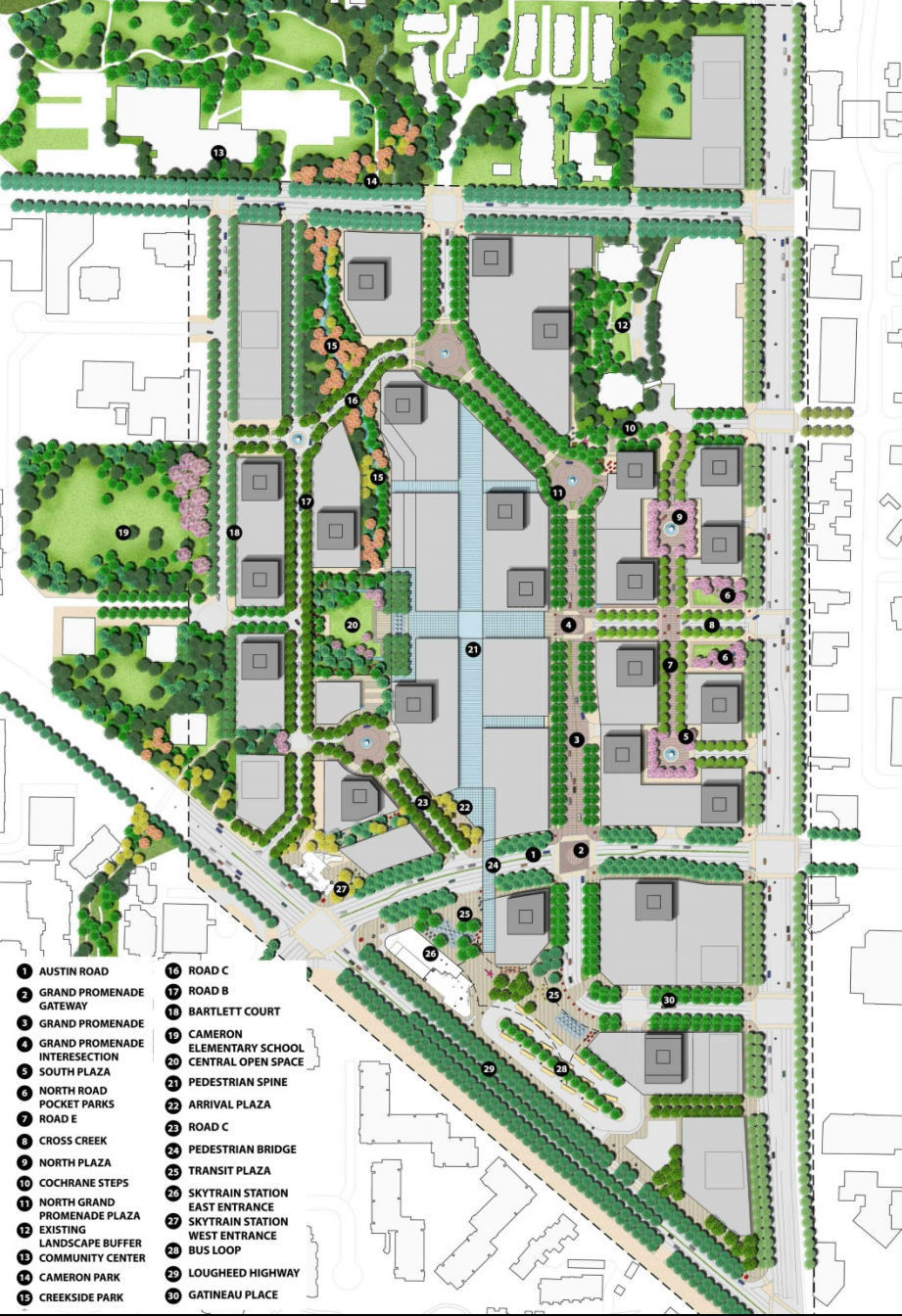 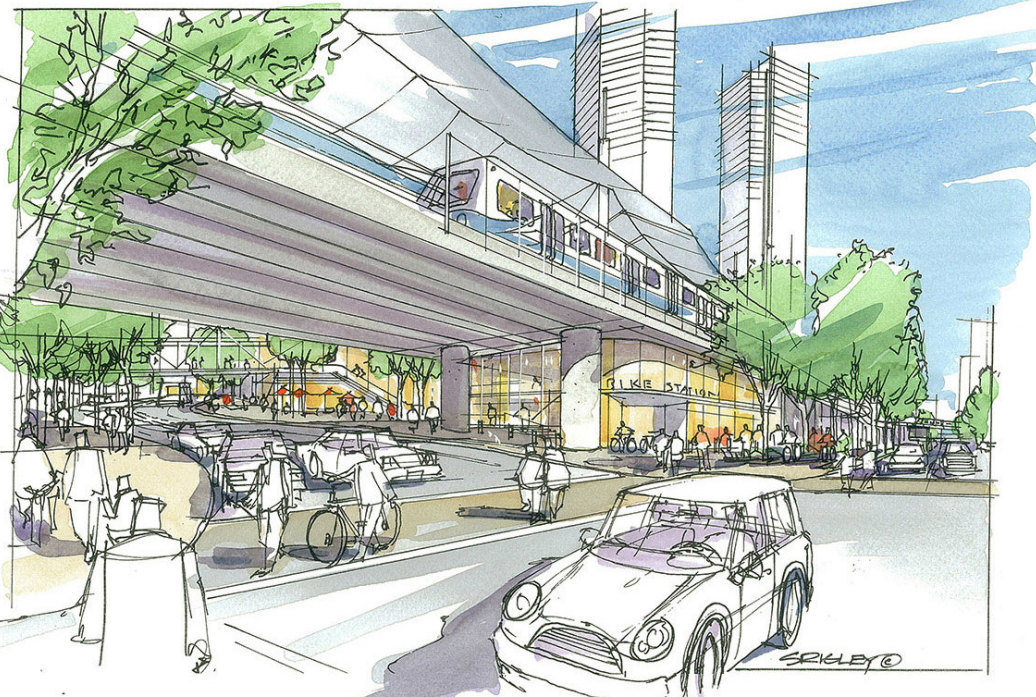 The Grand Promenade high street, designed as a “festival street”. 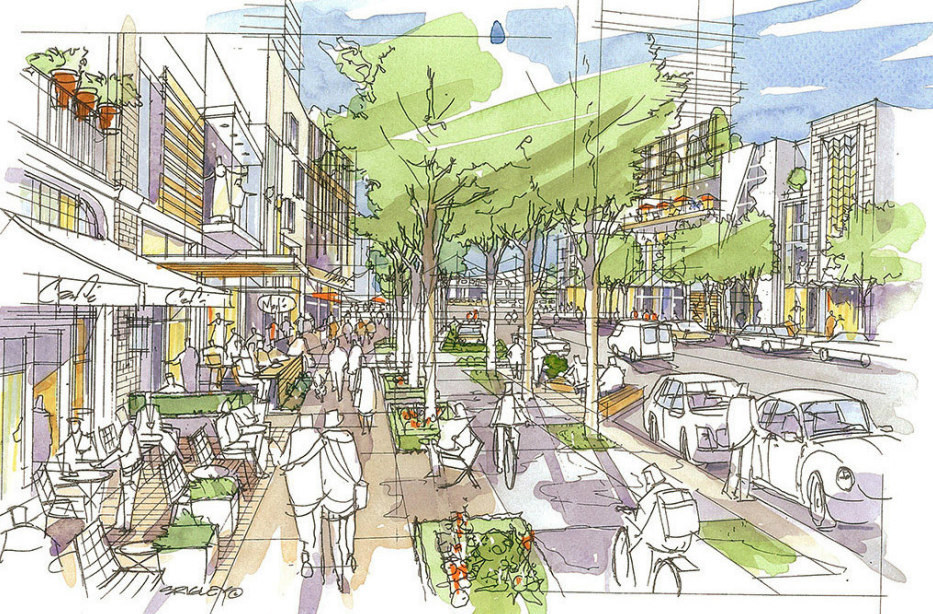 View of a landscaped North Road. 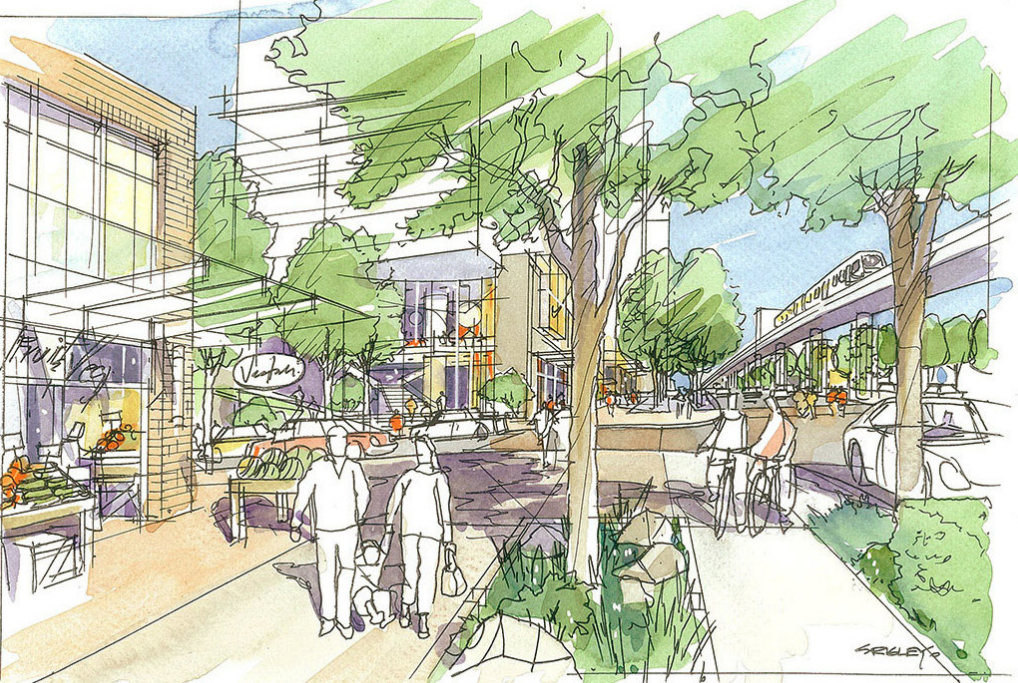 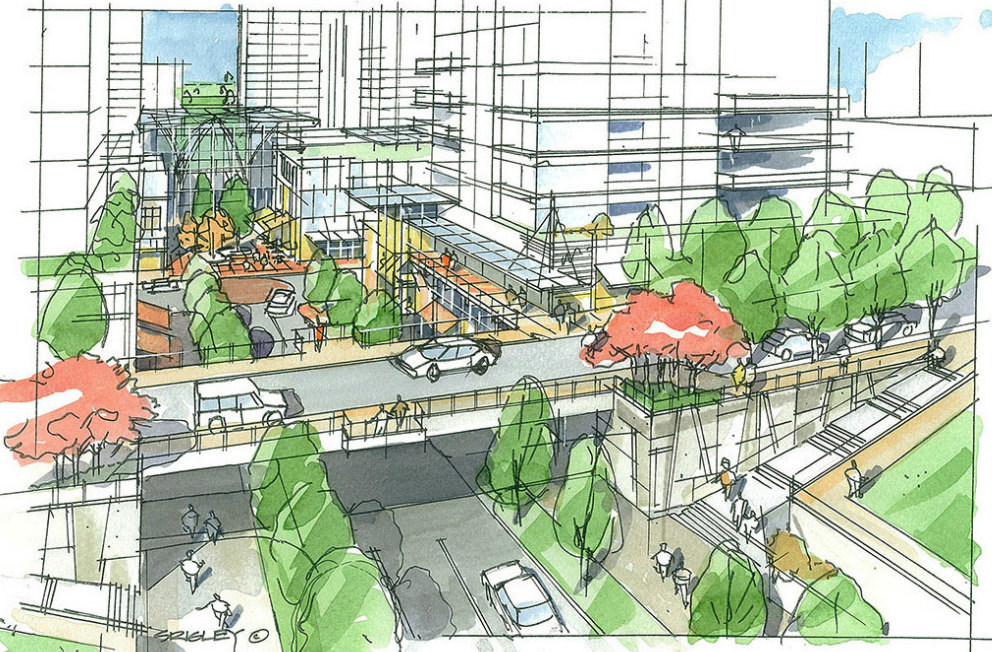 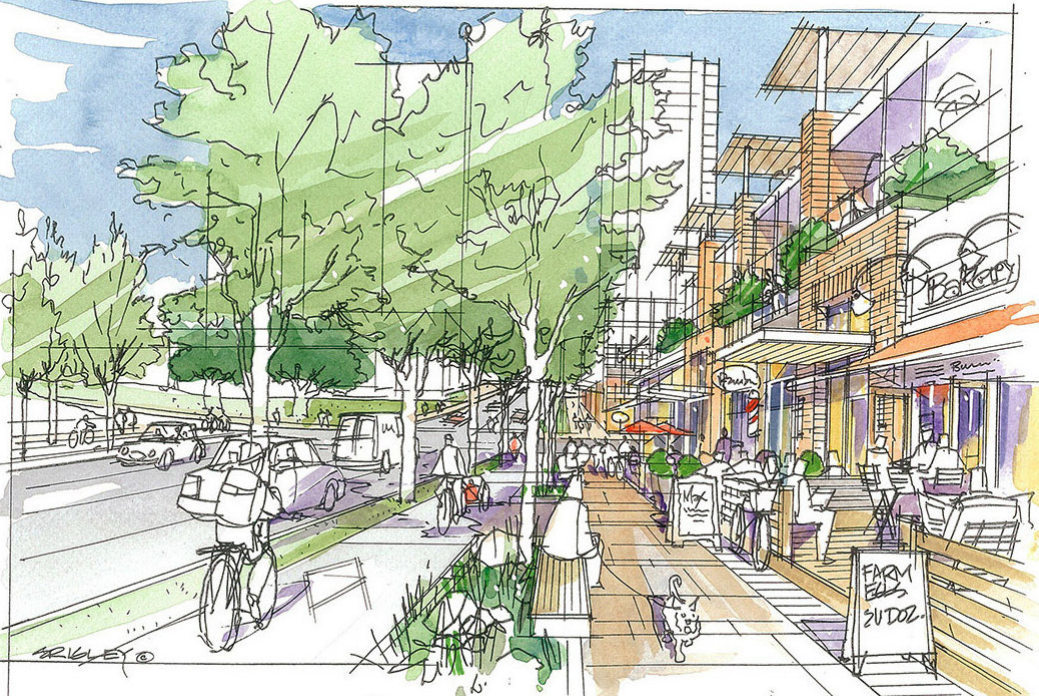 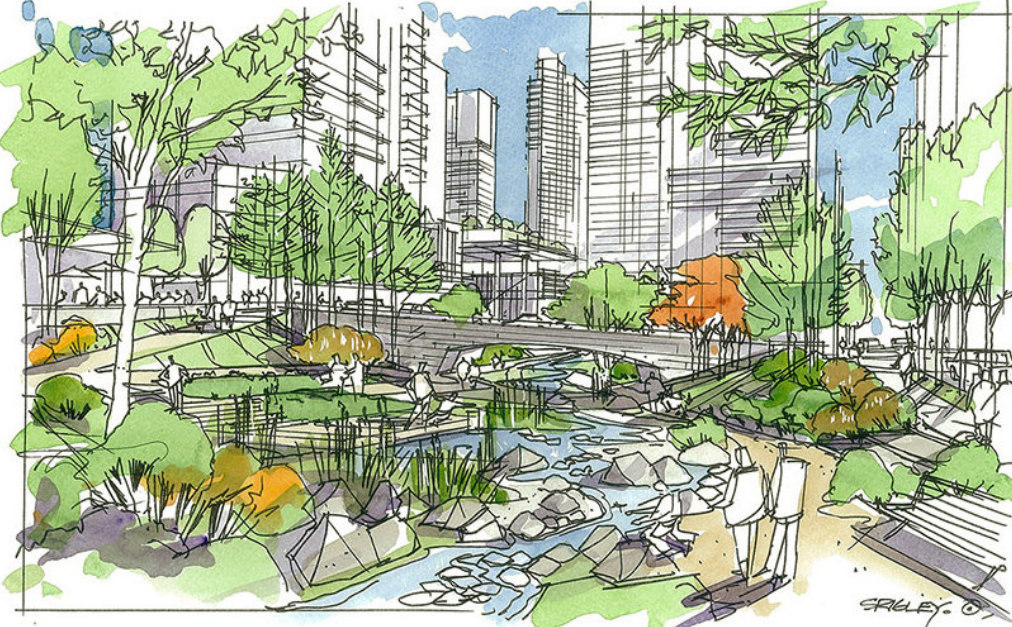 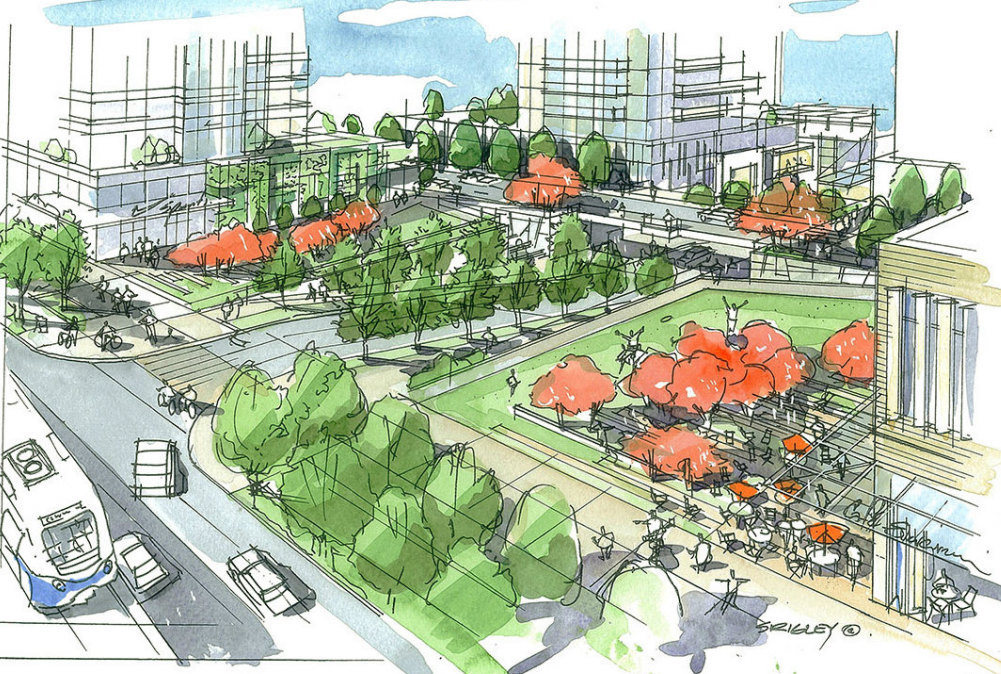 Cochrane Steps will provide a connection from North Road to the Grand Promenade.