Artistic rendering of the future retail, entertainment, and shopping complex at the site of the Richmond Night Market. (GEC / Joyce International Properties composite)

The planned redevelopment of a vacant 22-acre waterfront site, formerly a cement plant, in North Richmond near River Rock Casino and the Canada Line’s Bridgeport Station could force the Richmond Night Market to relocate after its coming 2017 season.

Since 2012, organizers of the night market have been leasing property from real estate developer Jingon International Development Group, which is making headway with its $4-billion commercial and entertainment redevelopment plan according to sources. Its lease of the property to the night market ends soon, after the night market closes for the season this fall.

The night market’s lease was originally for a three-year term and it was later extended for an additional three years. However, another renewal beyond 2017 is unlikely. 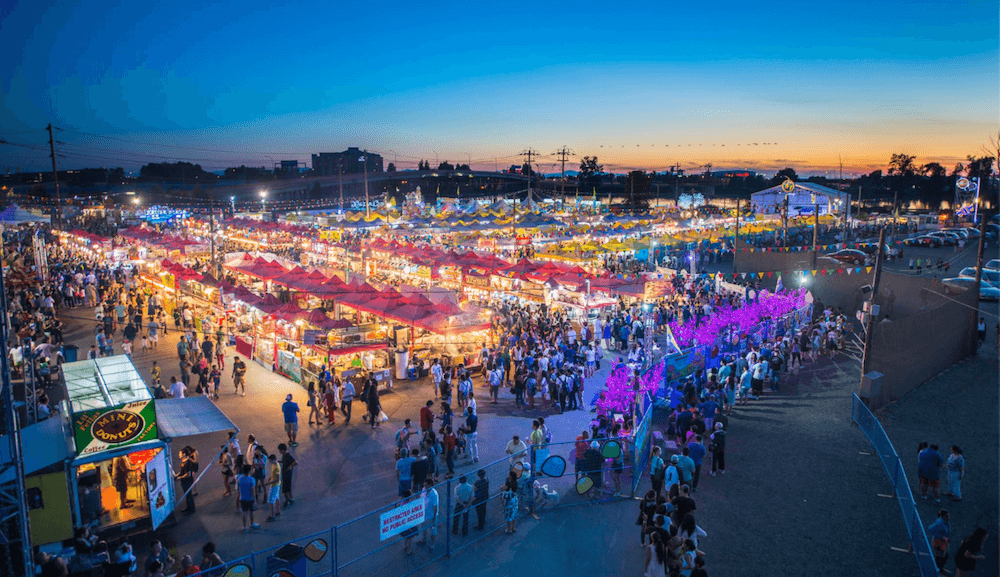 Organizers say they are working on making alternative plans for the future of their night market.

“For next year, we are still currently in the process of confirming details. We are working on several options and nothing is confirmed as of yet,” Yina Qi with the Richmond Night Market told Daily Hive. “We will have more details over the coming months.”

The Richmond Night Market began in 2000 and was originally located at Vulcan Way near the Knight Street Bridge. This site is now home to the competing International Summer Night Market, which rebranded this year as the Illumination Summer Market with “Canada’s largest light show”. After a four year hiatus, largely due to complications with finding a suitable new site, organizers reopened an expanded market at the large gravel site just footsteps away from SkyTrain.

“The location has been great especially since it is close to the Canada Line’s Bridgeport Station, so it’s very convenient for visitors especially if they want to come from North Vancouver or anywhere from the Lower Mainland since it’s so accessible from SkyTrain,” continued Qi. “It has been pretty good because of the convenience it provides.”

With 250 vendor booths and close to 100 food stalls, this night market sees approximately 10,000 visitors per night and employs approximately 1,000 people on a seasonal basis. Qi says the theme for this year will be released at the end of the month, just ahead of its opening period from May 12 to October 9 on Friday, Saturday, and Sunday. 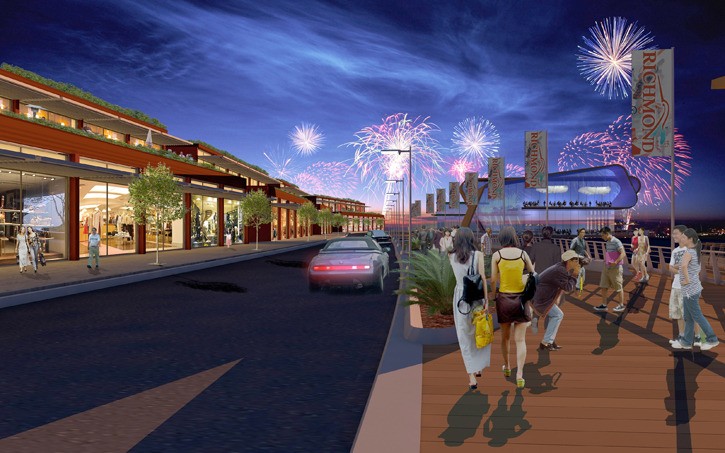 Plans submitted to the City of Richmond in 2012 by Jingon International Development Group called for a development with a floor area of four million square feet over the 70 acre site, which includes the footprint of the night market.

At a cost of as much as $4 billion, it included six high-end hotels, 1.1 million square feet of office space, a large international shopping centre, nightclubs, bars, clubs, theatres, 450,000-square-foot convention centre, 300-boat marina, and a small ferry terminal. It would all be within a mix of low- and mid-rise buildings.

Altogether, along with River Rock Casino, it would go a long way towards cementing the municipal government’s master plan in making the area around Bridgeport Station the city’s entertainment district. However, the project will not be built at once; it will likely be a multi-phase project, spanning over many years, rolled out in response to changing economic conditions and demand.

On the southern border of the site on Bridgeport Road, construction on the International Trade Centre is nearing completion for its anticipated opening later this year. The three-building, 12-storey project consists of a 110-room OPUS Hotel, an expansion of the Yaletown boutique hotel brand, as well as office and retail space.