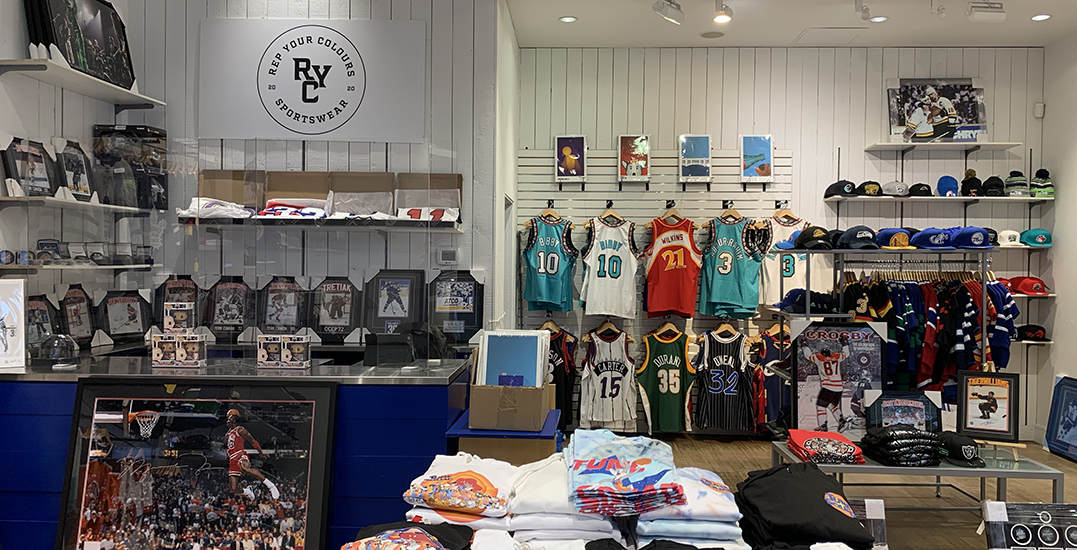 Rep Your Colours has opened a new pop-up at the Village in Park Royal (Daily Hive Vancouver).

A Vancouver-based sportswear retailer has found a new home for the holiday season, and they have something to offer for every type of sports fan.

Rep Your Colours first launched in December 2020 with a pop-up inside West Vancouver’s Park Royal Mall. After a brief stint at Richmond Centre, the brand has come full circle, this time opening a pop-up space at The Village at Park Royal.

With a larger space, the retailer has more to offer, catering to both the casual and committed sports fan. Visitors can find modern and retro jerseys for various teams, an impressive selection of headwear, and memorabilia from some of the greatest teams and athletes in sports. 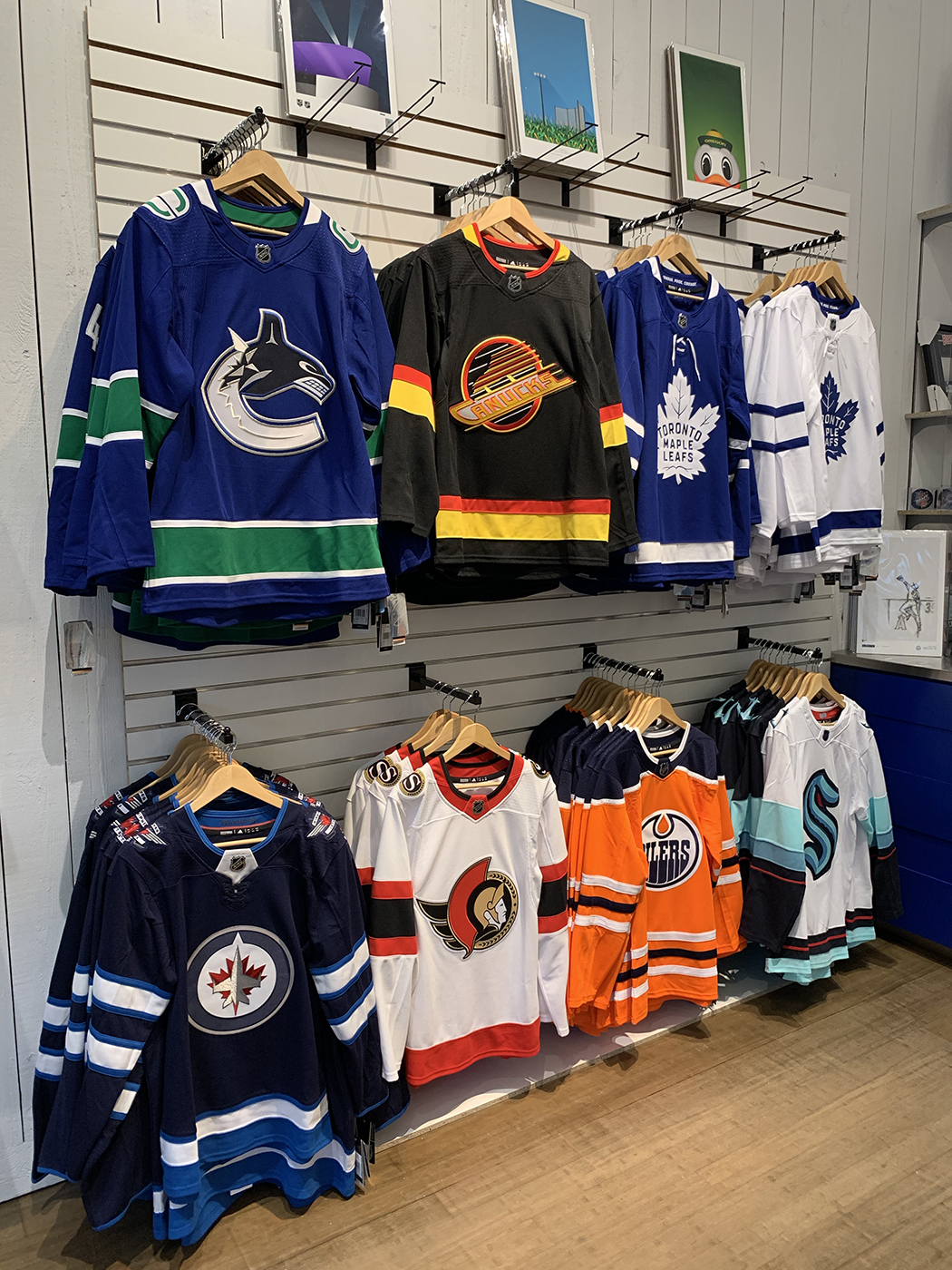 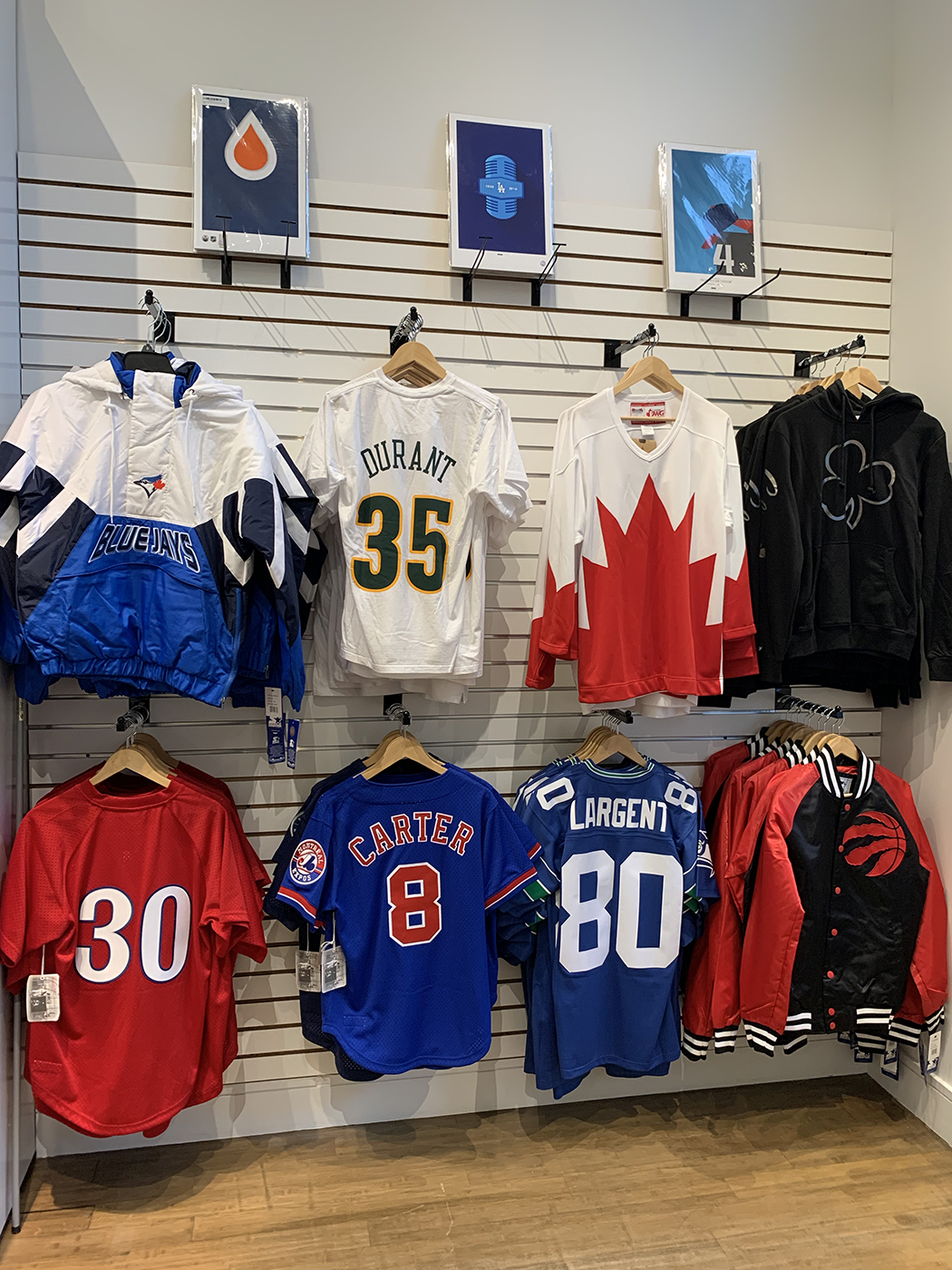 Phil Kinninmont, owner of Rep Your Colours, tells Daily Hive that the pop-up serves as the perfect homecoming opportunity.

“We had an opportunity to come back to where it all sort of started,” he says in an interview. “This is a great space. I think it’s a perfect size, we’ve rounded out the collection, and I think I have a pretty good idea of where the vision of the business is.”

As far as that vision goes, it’s about bringing together three distinct archetypes that live within sportswear and memorabilia, catering to nostalgic fans, hardcore collectors, and modern sports enthusiasts. 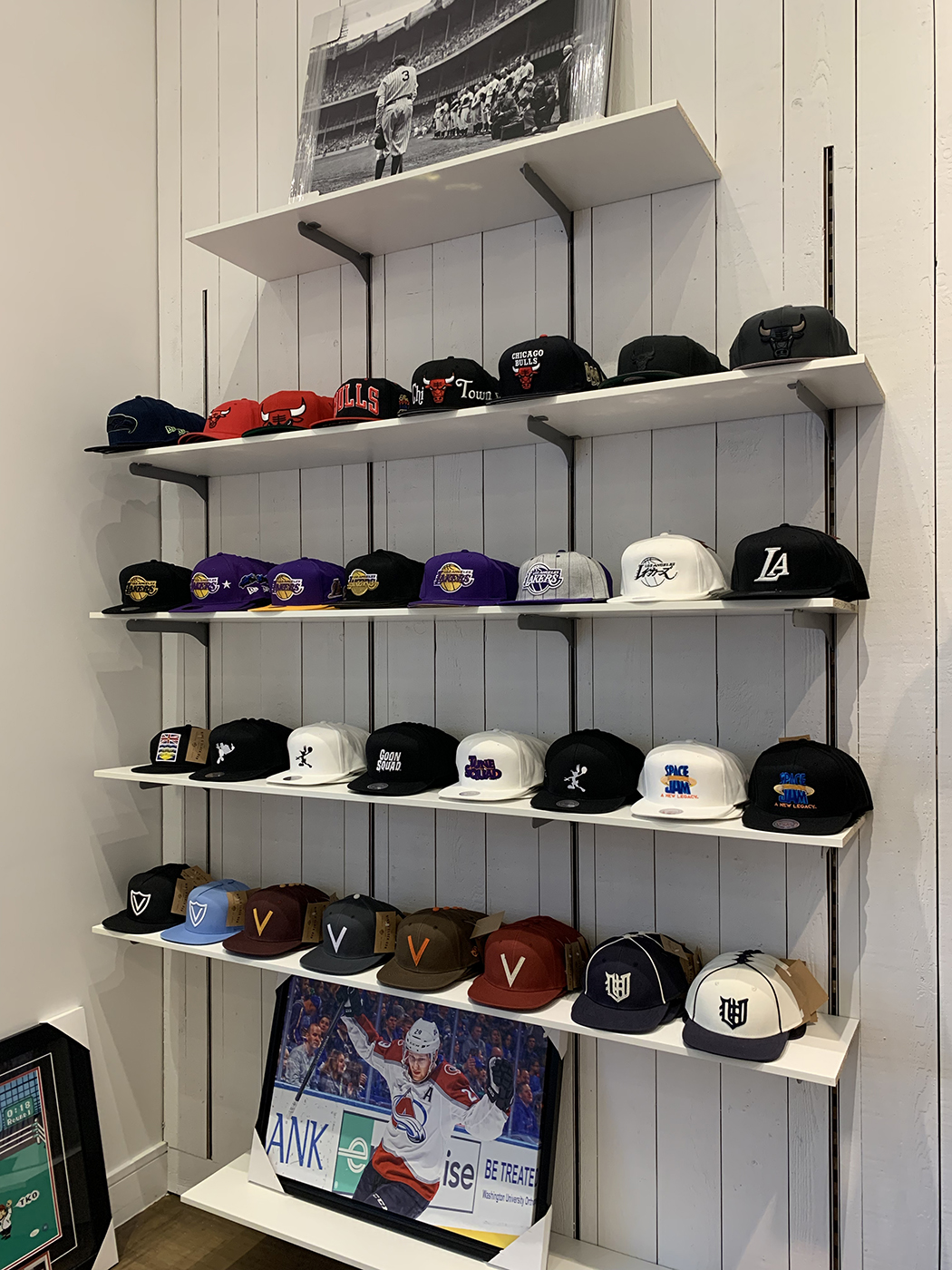 “I feel like it brings those three sectors together,” Kinninmont says. “It’s not just your dad’s sports store, it’s not just an elitist memorabilia shop, and it’s not just lifestyle clothing. I think it’s bringing all three of those things together.”

One of the most impressive pieces is a signed, framed photograph of Michael Jordan captured during the 1988 All-Star Game. Autographed and framed photography of other modern athletes, and iconic moments in sports, also decorate the inside of the store. 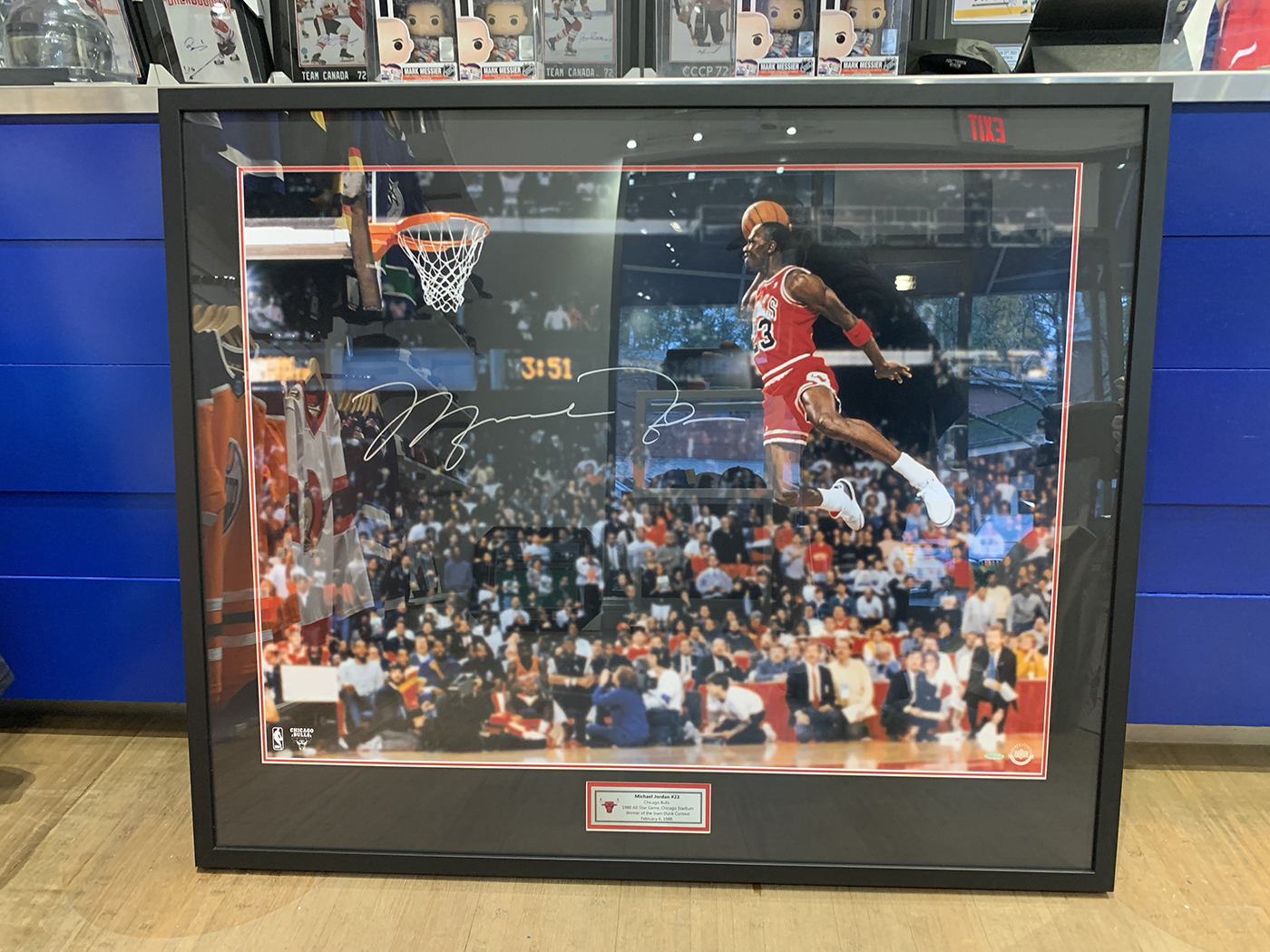 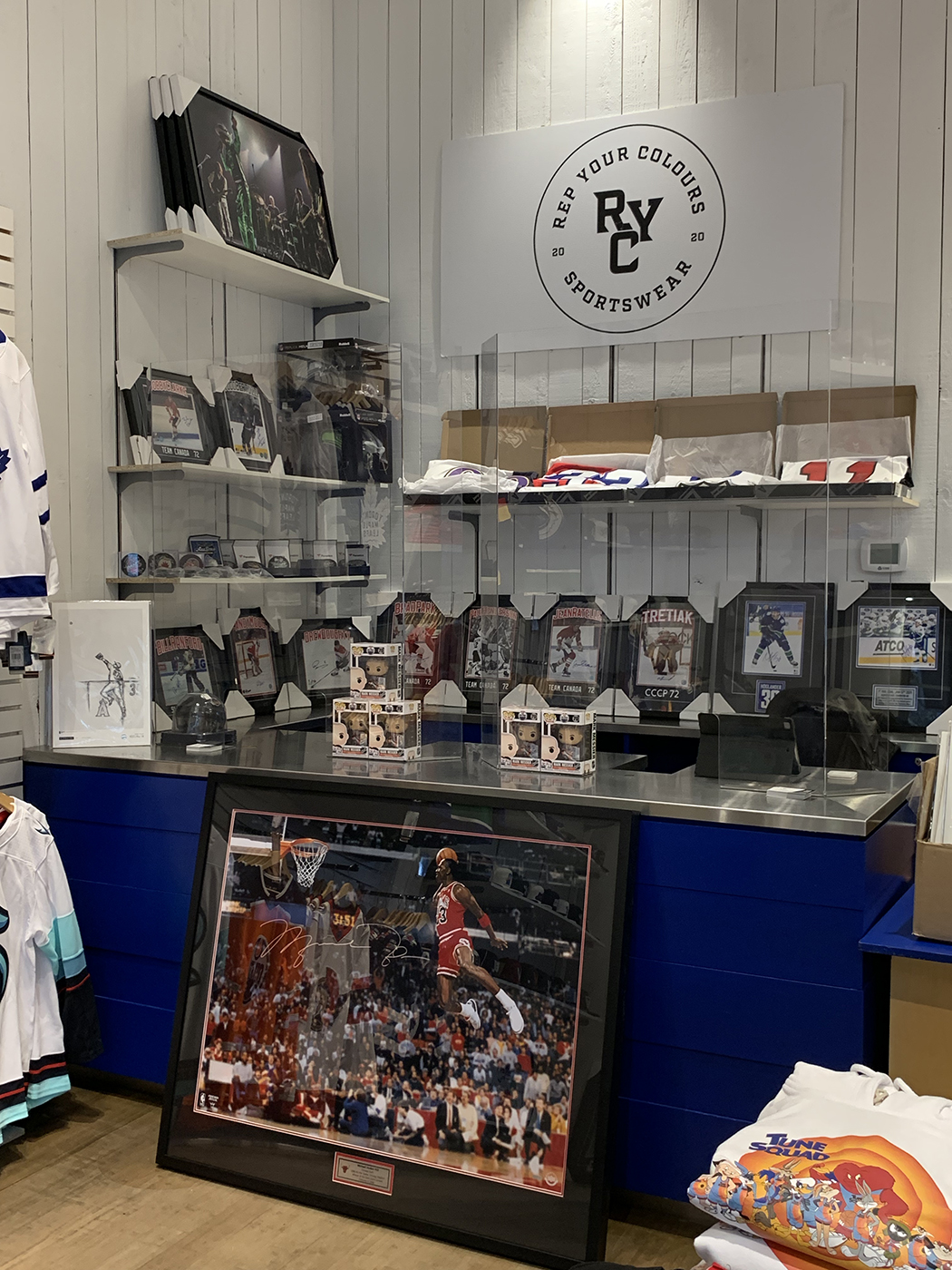 Framed photos and Funko Pops can be found at the front of the store (Daily Hive Vancouver).

With the new space, it was also an opportunity for Rep Your Colours to dive even further into lifestyle apparel. In addition to clothing and headwear from fan-favourite teams like the Chicago Bulls, Montreal Expos, and Toronto Raptors, the store also features the recent Mitchell and Ness Space Jam 2 collaboration. 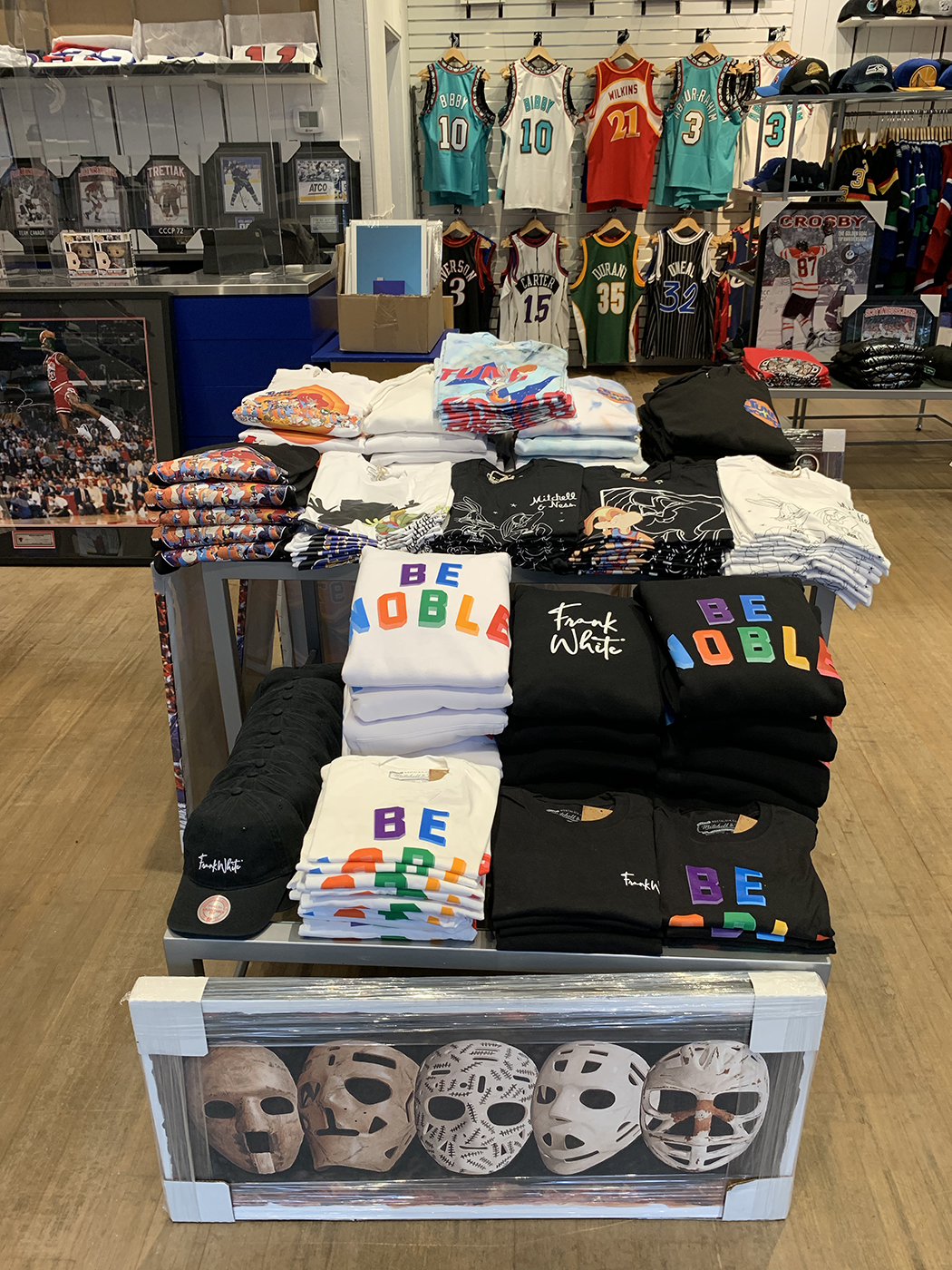 And while he doesn’t view it as a competition, Kinninmont is confident that the store is close to having the best selection of hats, T-shirts, jerseys, hoodies, and jackets for the Toronto Raptors and the defunct Vancouver Grizzlies — two fan-favourite teams in Vancouver. 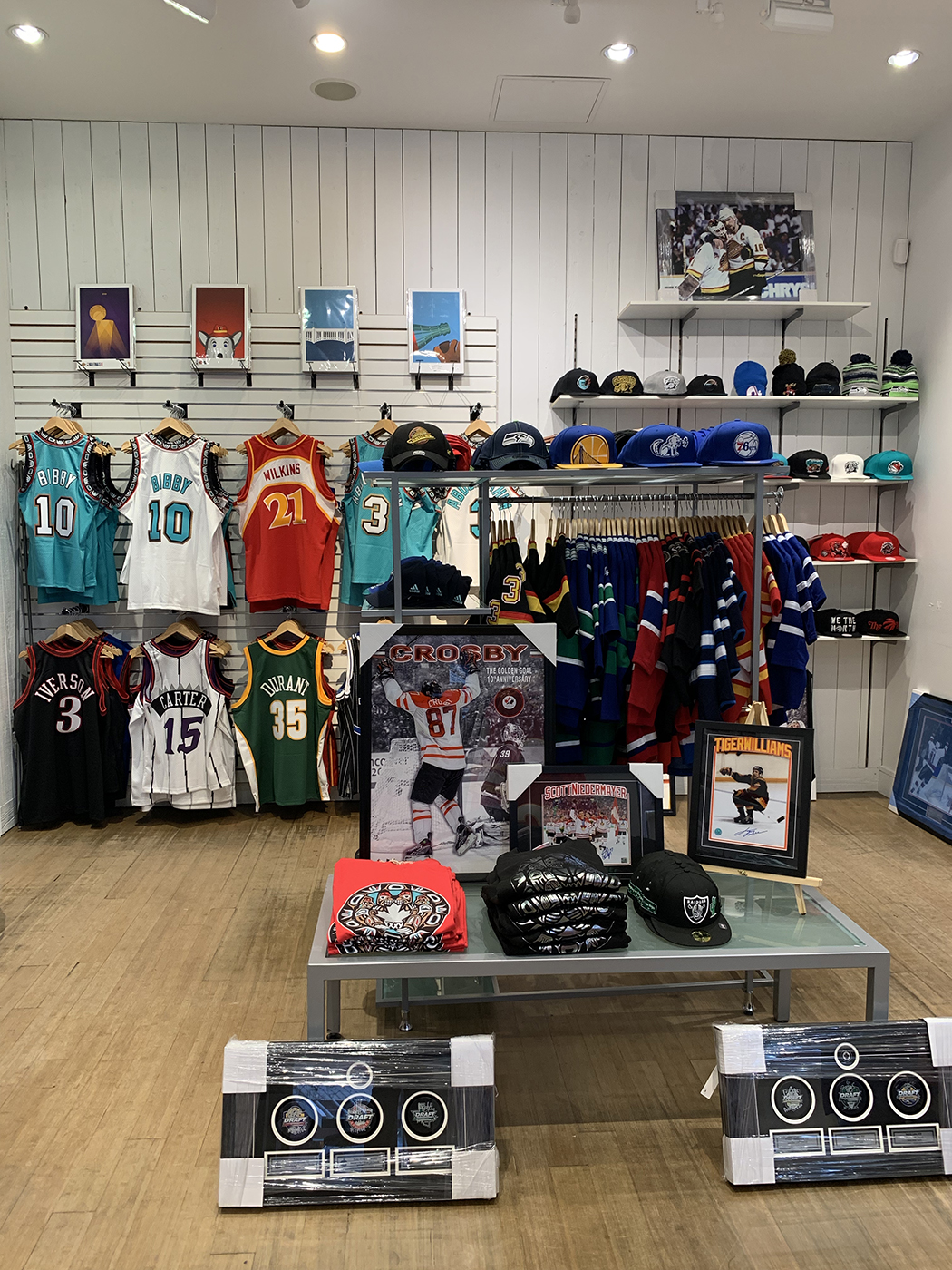 “I think it’s a point in pride, not a competition thing,” Kinninmont says. “The more good stores, the better.”

“But I would say… it’s probably pretty close to being the best in selection when it comes to hats, T-shirts, jerseys, hoodies, and jackets. Most places carry a couple of pieces, and we’ve tried to be the place to get it all.” 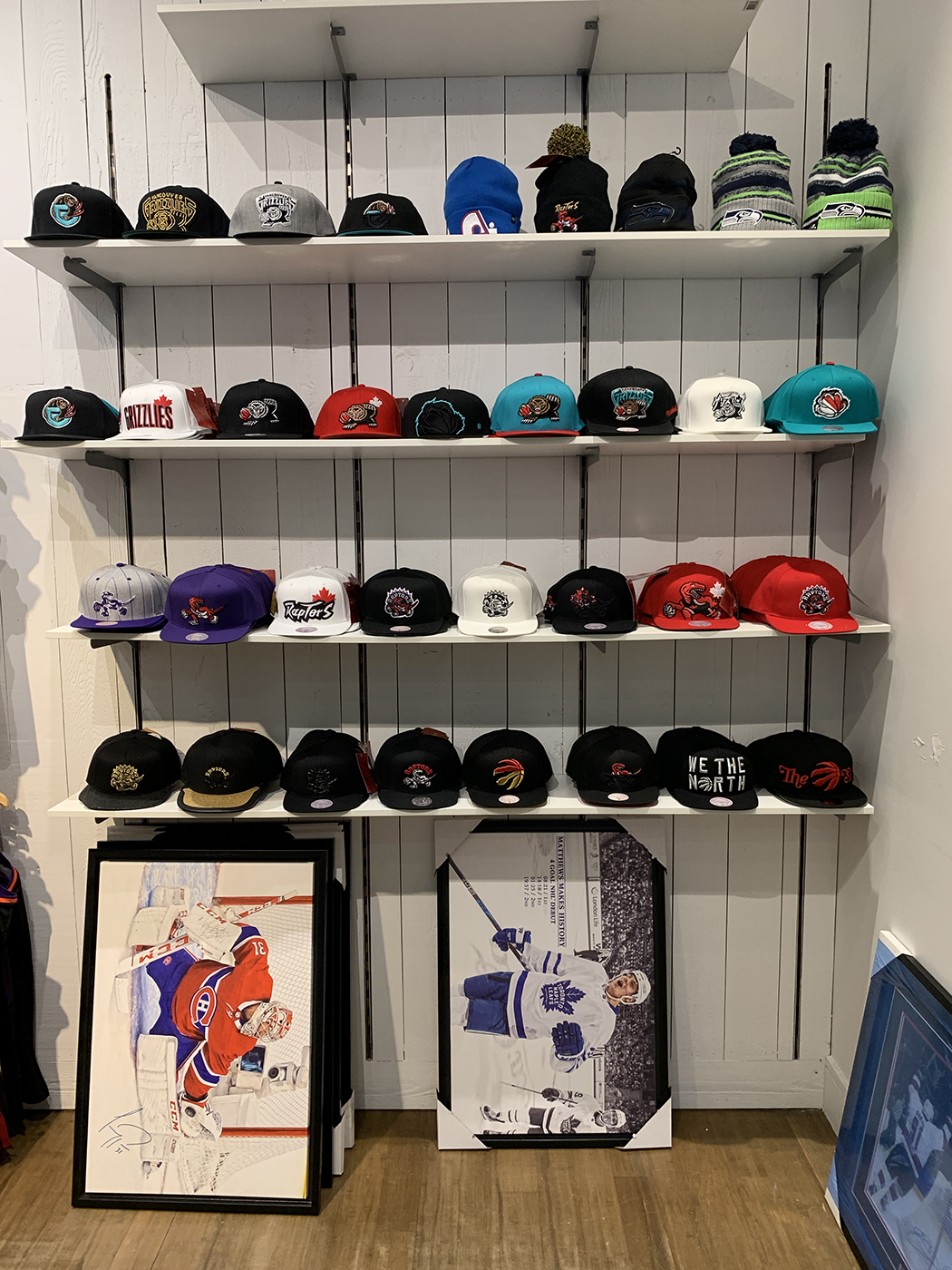 The Rep Your Colour pop-up at The Village will be open until December 31, 2021. Although nothing is set in stone, the brand hopes to open a permanent location.

“Down the road, we’re looking for a full-time space but walk before you run,” Kinninmont says. “And hopefully, eventually, we can be the place to go for everything jerseys.”

But it’s not just jerseys that fit into his long-term vision for the brand. He wants to turn Rep Your Colours into a one-stop destination for all kinds of sports fans, regardless of age, team, or gender.

“As a sports fan, I always ask people in the industry, ‘Where’s the best sports store you’ve ever stepped foot into?'” Kinninmont says. “And no one can give me an answer.”

“We just want to show that there can be a local business where everybody is welcome. It doesn’t feel like just a place for guys to shop; we realize that women are huge sports fans or buying for the sports fan. But we also want the hardcore fan to come in here and have a few ‘oh crap’ moments.”