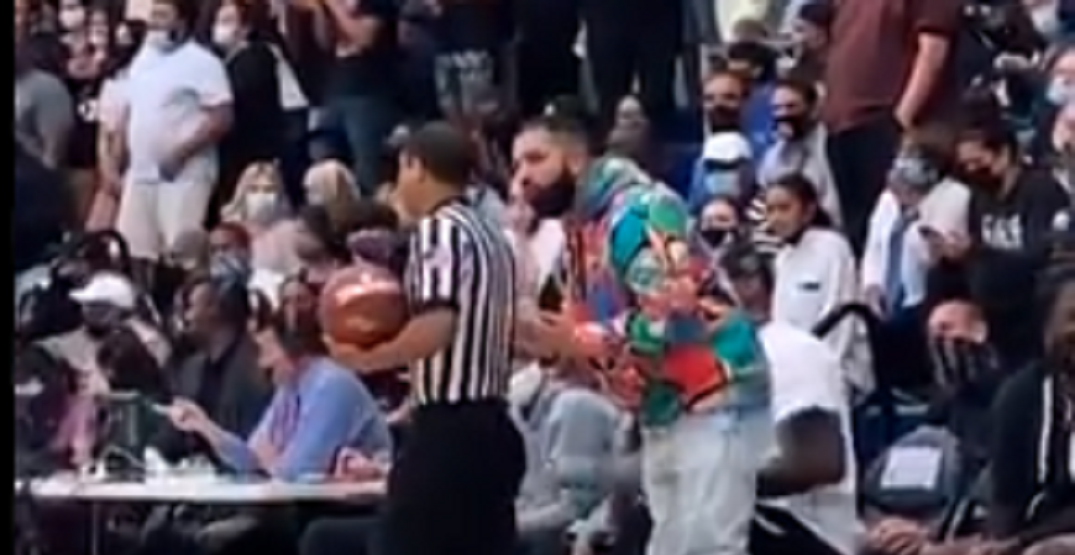 Imagine you’re doing your day job and Drake is yelling in your ear that you’re messing it up.

That’s the experience a California youth basketball ref had this past Friday, with the Canadian music artist in his usual courtside spot for a LeBron “Bronny” James Jr. matchup, his first of the 2021 season after recovering from a knee injury.

Drake has a few words for the ref 😂🔥 pic.twitter.com/zQXNoQzNlq

Drake might’ve had a point. Bronny’s Sierra Canyon team ended up losing 80-72 to Corona Centennial in the final of the CIF-SS FORD Open Division.

James Jr.’s games have been a phenomenon over the last few years, with fans and media alike showing up solely to get a glimpse of the son of one of the best basketball players of all time.

Drake actually brought his own son, Adonis, along as well.

Don’t get me wrong, Drake, Lebron and JR are cool, but Adonis is really stealing the show here pic.twitter.com/pCrnWAa3uZ

Bronny, a high school sophomore, can’t even go in the NBA draft until 2023 or 2024, when his father would be at least 38 years of age. The elder James has expressed interest in playing with his kid at the professional level, although it would be quite the logistical challenge based on wherever he is (or isn’t) drafted.

If there’s anything that’s certain about this friendship, you can bet Drake will be referencing Bronny in a new track soon enough.