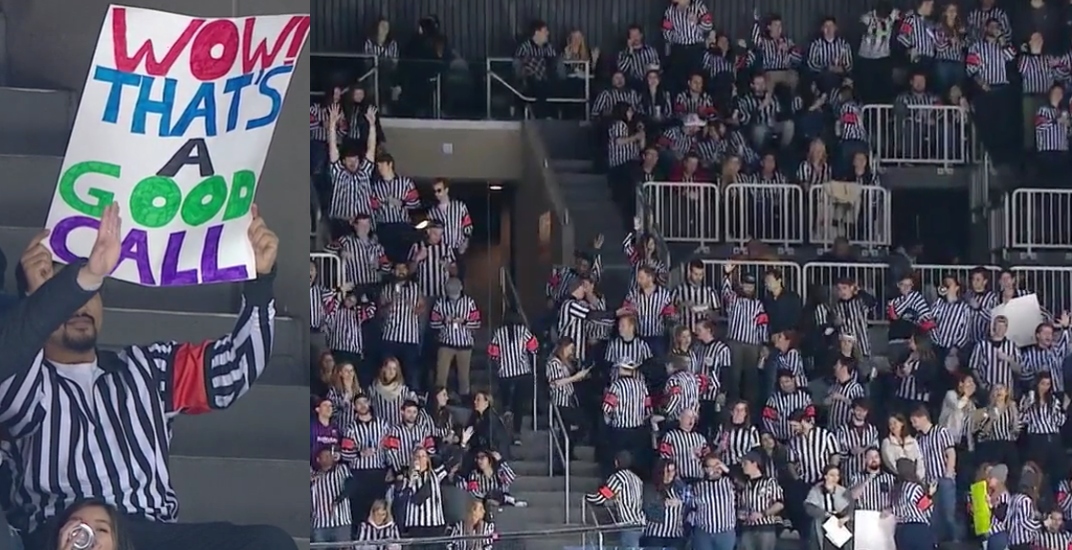 While most fans arrived to Barclays Center in Brooklyn to cheer on the New York Islanders or the visiting Vancouver Canucks, hundreds of people were cheering for another team.

Wearing black and white striped shirts, they came to cheer on the referees and linesmen.

Two full sections of referee fans at the #Canucks #Islanders game having a hoot pic.twitter.com/VFJjXnZtQT

The group was there to celebrate “Referee Appreciation Night,” an annual event now in their fourth year according to the group’s website.

The rest of the fans at Barclays are booing the refs but these ones aren’t. Hundreds here for a fan organized Ref Appreciation night. https://t.co/UINv1I7IJO pic.twitter.com/DIN2XKtkif

The group describes themselves as “a bunch of strangers (soon to be best friends) going to a hockey game dressed as referees and cheering for the refs…and only the refs.” They’re hoping to promote a “pro-sportsmanship agenda worldwide.”

We’re not exactly sure how many people showed up, but they filled most of two sections of the arena. It looked like a fun party, as the group cheered every penalty, offside, icing, and “really anytime those glorious zebras blow their whistles.”

Two sections of fans cheering for the refs at the #Canucks vs #Isles game in Brooklyn. Amazing 😂 pic.twitter.com/PeLA5bVtVY

There is an entire section of zebras at this Islanders game and they are chanting “let’s go refs” and going NUTS for every icing and offside call. pic.twitter.com/lPfY0Bx5j9

All these refs and the #isles still can’t get a call pic.twitter.com/UVAgKyjEP3