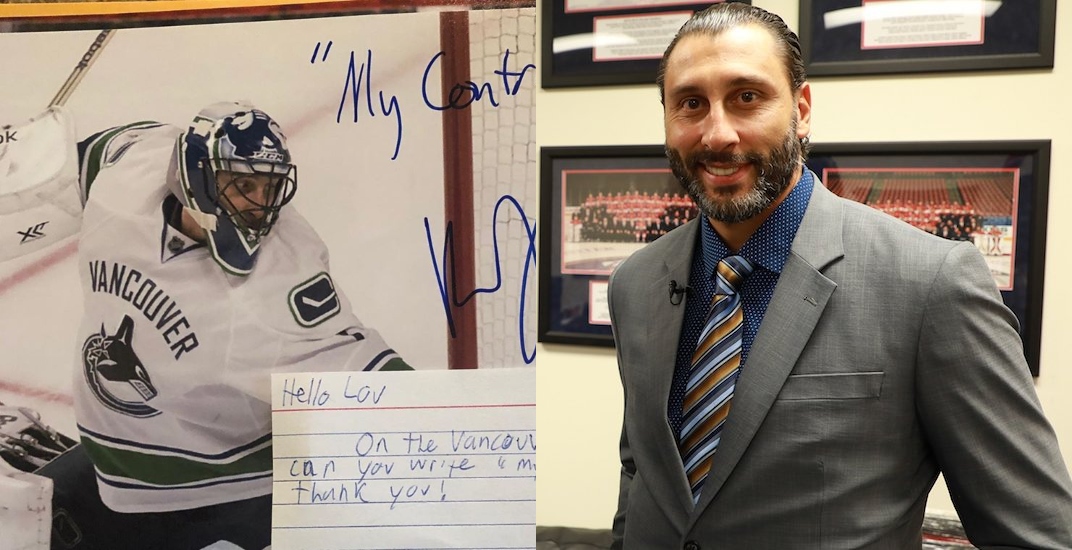 While Roberto Luongo’s Hall of Fame-worthy playing career is over, his Hall of Fame social media presence continues.

Luongo shared some fan mail with his 67.3k Instagram followers. In the letter, a fan asked if Luongo would sign a picture with an unusual request.

“Can you write ‘my contract sucks’?” the fan asked.

Luongo signed the image, presumably for a Canucks fan given it was from his Vancouver days, and fulfilled the ask.

This is the second time Luongo has shared a humorous fan mail request with his Instagram followers. The first was when a fan asked him to sign a picture of Carey Price.

The “my contract sucks” fan request was in reference to one of Luongo’s most famous soundbites, when he spoke to reporters following the 2013 NHL trade deadline. With the Canucks anointing Cory Schneider as their starting goalie, GM Mike Gillis tried to trade Luongo but couldn’t find any takers because of his contract and the new NHL rules penalizing such deals.

“My contract sucks. That’s what the problem is,” Luongo said at the time. “Unfortunately it’s a big factor in trading me and it’s probably why I’m still here.”

Less than three months later, the Canucks shocked everyone by instead trading Cory Schneider at the NHL Draft. They kept Luongo for most of the next season, until new Canucks coach John Tortorella benched him for the Heritage Classic, causing the star goalie to once again request a trade.

The goaltending mess eventually turned out reasonably well for the Canucks, as they got a draft pick that turned into Bo Horvat for Schneider and Jacob Markstrom for Luongo.