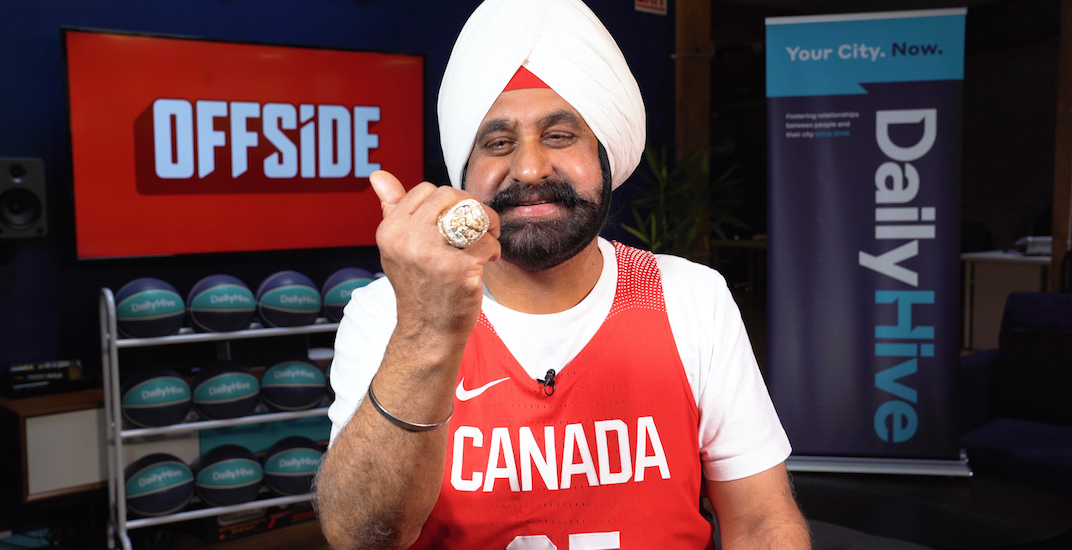 Tickets went on sale for the this summer’s Olympic men’s basketball qualifying tournament in Victoria today. Among those in attendance will be the Toronto Raptors’ most loyal supporter, Superfan Nav Bhatia, who sees parallels with the national team and the Raptors, who shocked the world last June.

Visiting the west coast representing Canada Basketball as their new Global Ambassador, we caught up with Bhatia at Daily Hive’s Vancouver headquarters.

“This is our opportunity,” Bhatia told us.

“We have the home court advantage. Come, show up, commit to it.

“We are going to qualify and surprise the world in Japan, just like the Raptors surprised the world in the NBA, by winning the championship.”

Bhatia was wearing a red Canada Basketball jersey, as well as the NBA championship ring the Raptors presented to him last October.

While players and staff received championship rings, they aren’t all the same, with players getting the more expensive version.

But the team didn’t forget about their biggest supporter. Not only did Bhatia receive a championship ring, he received the player’s version. He told us it’s the first time a non-player has received that honour.

Bhatia described the scene, with over a hundred reporters in the press conference room in Toronto, when Masai Ujiri presented it to him.

“Masai comes on the stage and presented me with this player’s ring and I was shocked. I was shaking,” he said.

“The first time a non-player got this player’s ring. And I accepted that on behalf of all the fans. And I mean that. This is the only ring which is available for the fans to touch it and wear it.” 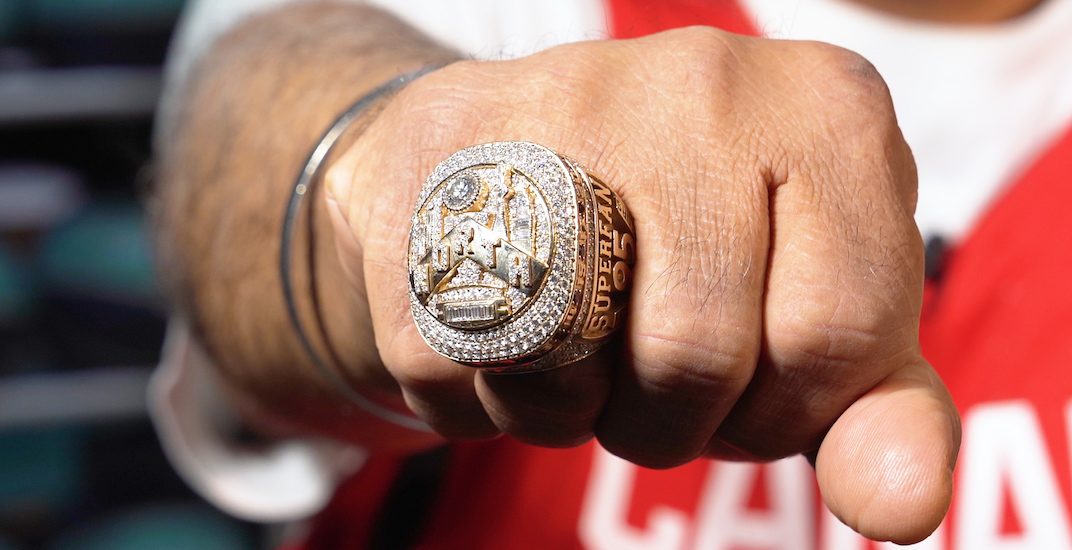 A player’s ring for the Superfan (Andrew Bartlett / Daily Hive)

Bhatia wasn’t kidding by the way. Following our video interview with him, the Superfan graciously invited everyone working in our office to try on the ring and get their picture taken with him (a lineup quickly formed), despite numerous other media obligations he had to get to.

He wasn’t kidding about that either.

“My wife is upset that I’m in love with this ring and I’ve forgotten about the other ring.”

Watch the full video below, in which we also asked Bhatia about Kobe Bryant:

Tickets appear to be going fast for the Olympic qualifiers in Victoria, with some sections already unavailable for purchase.

Canada is expected to be represented by many of our best NBA players, with a trip to the Tokyo 2020 Olympics on the line. Jamal Murray has already publicly committed to playing for the national team this summer, as have breakout stars RJ Barrett and Shai Gilgeous-Alexander, among others.

Canada is scheduled to play Giannis Antetokounmpo and Greece (June 23) and China (June 24) in Group A action, with Uruguay, the Czech Republic, and Turkey competing in Group B. The top two teams in each group will advance to the semi-finals (June 27).

The winner of the tournament’s final game on June 28 will advance to the Summer Olympics — something Canada hasn’t done in men’s basketball since a Steve Nash led team competed at the 2000 Games.