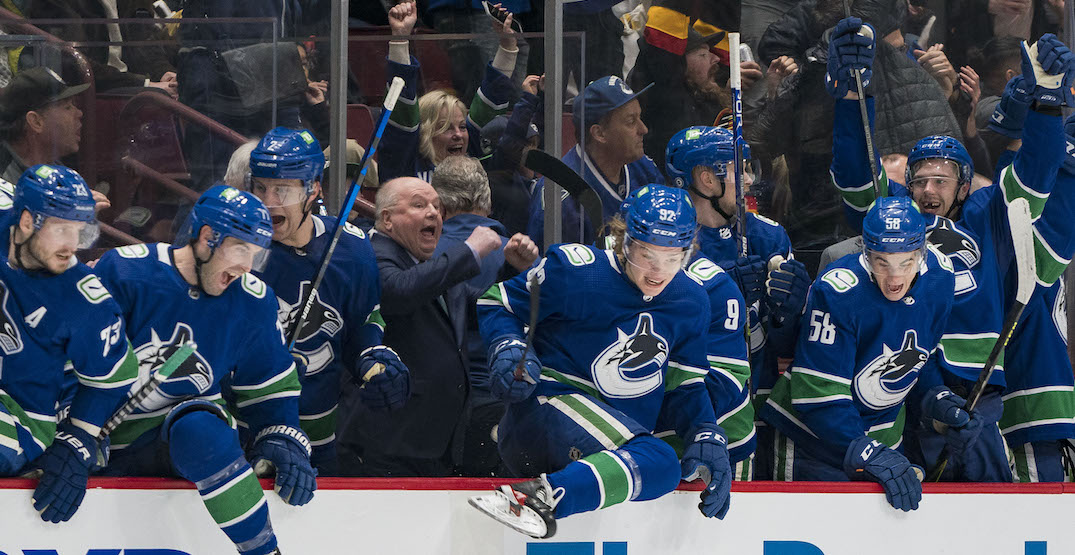 And truthfully, the Vancouver Canucks playoff push lasted longer than even the most optimistic fans could have hoped for.

As of writing, the Canucks aren’t mathematically eliminated, but the Dallas Stars only need one point over their next three games to fully extinguish Vancouver’s chances.

Two of Dallas’s final three games are at home against the lowly Anaheim Ducks and Arizona Coyotes.

While the run might be over, fans should be proud of this team for the hurdles they had to overcome in order to make things interesting.

Unfortunately for J.T. Miller, he’s on the verge of setting a Canucks record that he probably doesn’t want.

When the Canucks are officially eliminated, Miller will finish with the most points in a single season by a Canuck who didn’t play in the postseason.

As of writing, Miller’s 96 points are the eighth-most in a single season by a Canuck in team history.

The next closest Canuck in terms of points is Elias Pettersson, who’s 30 points behind Miller for the team scoring lead.

Still, on an individual level, that’s a tremendous achievement for Miller.

One of the best stories of the Canucks season has to be Pettersson’s reemergence as a bonafide, top-line player.

The 23-year-old was a shell of himself early in the season, which we later learned was in part because he was playing with a taped wrist.

Pettersson’s season really turned around during a road game against the Washington Capitals on January 16. The Canucks were on a three-game losing skid at the time, but two goals from No. 40 led Vancouver to victory.

If Pettersson can carry that success into next season, it’s hard to envision the Canucks not being a playoff team.

For as good as Miller and Pettersson have been for the Canucks, the team’s MVP is clearly goaltender Thatcher Demko.

The 26-year-old has performed above expectations all season long. While he won’t be winning a Vezina Trophy this year, his performance rightfully had him in the conversation.

Demko’s real brilliance shone through at even strength. While his .915 save percentage overall is tied for 14th in the NHL, Demko’s .932 even-strength save percentage is third among starting netminders, trailing only Igor Shesterkin (New York Rangers) and Ilya Sorokin (New York Islanders).

The Canucks have been up and down this season, but Demko has been consistently brilliant the whole way through.

Special teams were a nightmare for the Canucks early in the season.

At the time of Travis Green’s dismissal, the Canucks’ 17.4% efficiency on the power play ranked 20th overall in the NHL.

As of writing, their power play has climbed all the way up to ninth.

Since Boudreau took over, the Canucks 26.6% power play efficiency is actually third-best in NHL, trailing only the Rangers and the Toronto Maple Leafs.

The Canucks penalty kill wasn’t just bad early in the season, it was bordering on historically inept.

At the time of Green’s dismissal, the penalty kill was sitting at a putrid 64.6% efficiency.

Since Boudreau took over though, the Canucks’ success shorthanded has shifted.

Vancouver has killed off 79.4% of penalties since Boudreau took over. And, the unit has only gotten better with time.

Since March 1, the Canucks actually have the ninth-best penalty kill in the NHL at 83.4%.

You can’t just rely on your stars if you want to make the postseason. Thankfully for the Canucks, a group of depth players have stepped up in their nearly miraculous quest to make the playoffs.

Rookie Vasily Podkolzin and journeyman Alex Chiasson were both admirably filling in top-six roles as the Canucks began to suffer injuries. And, before he got injured, Tanner Pearson was quietly having a really strong season.

Lower down the lineup, Matthew Highmore and Juho Lammikko continued to have success in a bottom-six checking role, even after the departure of Tyler Motte.

On defence, Brad Hunt has turned into a serviceable third-pairing defenceman after he was brutal defensively early in the season. Luke Schenn and Travis Dermott have also performed above expectations on the right side.

It’s no secret that the Canucks should have been out of it long ago.

They also looked out of it after three straight losses during a seven-game homestand in March, including crushing defeats to both the Detroit Red Wings and Buffalo Sabres.

But, against all odds, this team continued to battle.

It took until April 21 until the Canucks suffered a regulation loss this month. Even in that game against the Minnesota Wild, who were on a 12-1-3 run heading into the contest, the Canucks battled until the very end.

There are clearly flaws on this roster that need to be addressed in the months ahead, but this group can be proud of the run they went on, and it nearly resulted in one of the most unlikely postseason berths of all-time.