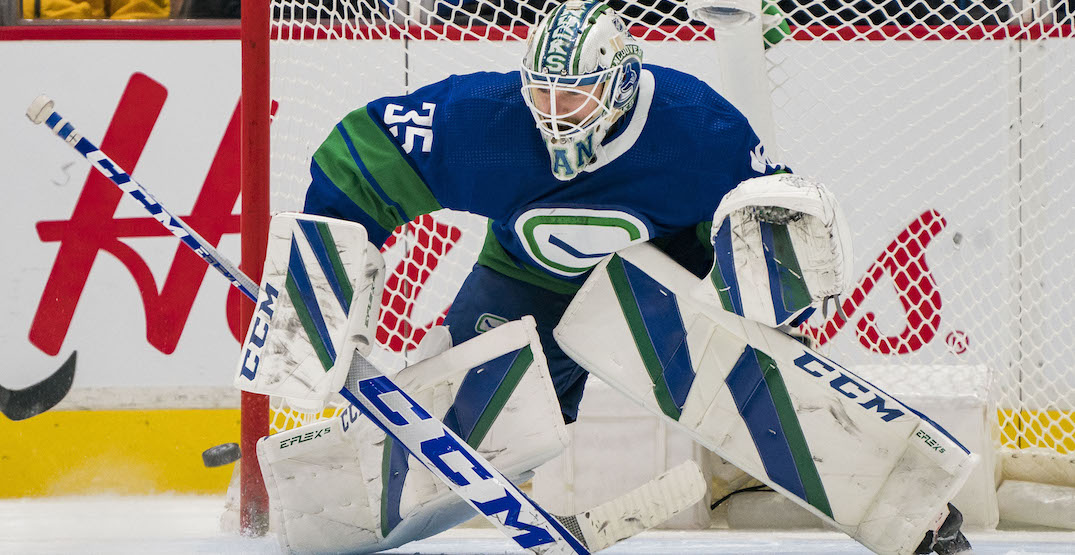 Thatcher Demko might be the Vancouver Canucks’ MVP, but is his performance Vezina-worthy?

It’s easy to forget that the 26-year-old netminder is still just playing in his first full 82-game season as a starting goaltender. The next time he steps onto the ice will be his 100th NHL appearance.

Despite that lack of experience, Demko is already beginning to strengthen his case for the Vezina Trophy, awarded annually to the top goaltender in the NHL.

“The thing that I’ve been working on the most this year is making sure that consistency is there,” Demko told reporters earlier this week.

“The bubble was what it was. It was a cool experience. [I’m] a little of sick of people talking about it, you know, the ‘Bubble Demko’ thing.

“It was awesome, but it was just three games and I knew that I had a lot more to prove.”

And the Save of the Year goes to…? pic.twitter.com/RZVxSRPsum

Demko continued to prove his worth in December, where he was named the NHL’s Third Star of the month. Demko posted a 7-1-0 record with one shutout, a 1.72 GAA and a .941 save percentage.

That performance has catapulted Demko back into the Vezina conversation after a middling November. However, it’s important to remember that we’ve seen a relatively high number of outstanding goaltending performances across the NHL.

With the season nearly the halfway point, here are 11 goaltenders who belong in the Vezina conversation.

Demko currently ranks first in games played (27), sixth in wins (15), and 12th in save percentage (.920) among goalies with at least 12 games played this season.

Those numbers alone won’t put Demko on the Vezina ballot, but if he can carry the Canucks to the playoffs, he’ll surely get more support.

In his first full season as a starter, Jack Campbell is proving last year’s performance was no fluke. The Maple Leafs starter currently leads the league with a .939 SV%.

The New York Rangers are currently second overall in the NHL with 48 points, and Igor Shesterkin is the main reason why. He’s bailed out the Rangers’ suspect defence, which has given up the fourth-most chances at even-strength.

Goaltending was a major question mark for the Pittsburgh Penguins coming into the season. North Delta’s Tristan Jarry quickly muted that conversation with his stellar performance.

Juuse Saros is tied with Demko and John Gibson for the most games played (27) among goalies this season. The Nashville Predators’ resurgence is one of the biggest surprises in the NHL, and the 26-year-old Finnish netminder is leading their playoff push.

Jacob Markstrom has greatly benefitted from Darryl Sutter’s new system in Calgary. However, Markstrom’s dominance has faded since the beginning of December after he posted five shutouts in his first 13 starts.

Without Andrei Vasilevskiy, the Tampa Bay Lightning are a .500 hockey team. With him, they’re one of the most dominant clubs in the NHL.

Despite a solid season, Ilya Sorokin needs a miraculous turnaround from the New York Islanders if he wants to earn a Vezina nod. According to Money Puck, the Islanders playoff odds are at 2.7%.

What might hurt Sergei Bobrovsky’s Vezina case is the fact that offence is the story in Florida. Regardless, the two-time Vezina winner has enjoyed a nice bounce-back season with the Panthers.

Jonathan Quick’s resurgence has been one of the biggest surprises in the NHL this season. He’s in the running for the Vezina after three straight seasons of providing below-average goaltending for the Los Angeles Kings.

A common rhetoric is that NHL GMs, who vote on the Vezina don’t look beyond wins and save percentage to determine the winner.

You’d hope that with increased access to analytics, that may change.

While Demko’s save percentage currently sits outside the top 10 among starters, his even-strength impact is more pronounced.

One stat that’s seeing increased usage is Goals Saved Above Average. This takes into account the expected goals a goaltender should allow based on shot quality versus the actual number of goals allowed.

Currently, Demko has saved 12.59 goals above average. The only goalie better in that category is Campbell (14).

Although Demko’s current run has put him back in the Vezina conversation, he likely needs to carry his team to the playoffs to seriously be considered one of the top three goaltenders in hockey.

There are outliers. Bobrovsky won the Vezina with the Columbus Blue Jackets back in 2012-13 despite his team missing the playoffs. Connor Hellebuyck also won it in 2019-20 when Winnipeg missed out on the postseason (they were ninth in the West when the season shut down).

Still, it’s unlikely that Demko gets a nomination without the Canucks making the playoffs.

The positive is that Demko’s MVP-like performance this season gives the Canucks a fighting chance of making the postseason. According to MoneyPuck, the Canucks’ playoff odds have jumped from 7.4% up to 20.6% in the time since Jim Benning and Travis Green were let go.

Despite the fact that the defence has improved this season, it’s Demko’s stellar performance that’s giving the Canucks a chance to miraculously make the postseason.

But, without a full season as an NHL starter, Demko still feels like he has to prove himself.

“This year I really wanted to come in and just nail down that consistency and prove that I could do it on a nightly basis,” Demko recently told the media.

“I still think I can sharpen some things up and just big picture wise, I’m only 26, so I still got a lot of years to continue to grow and develop my game.”