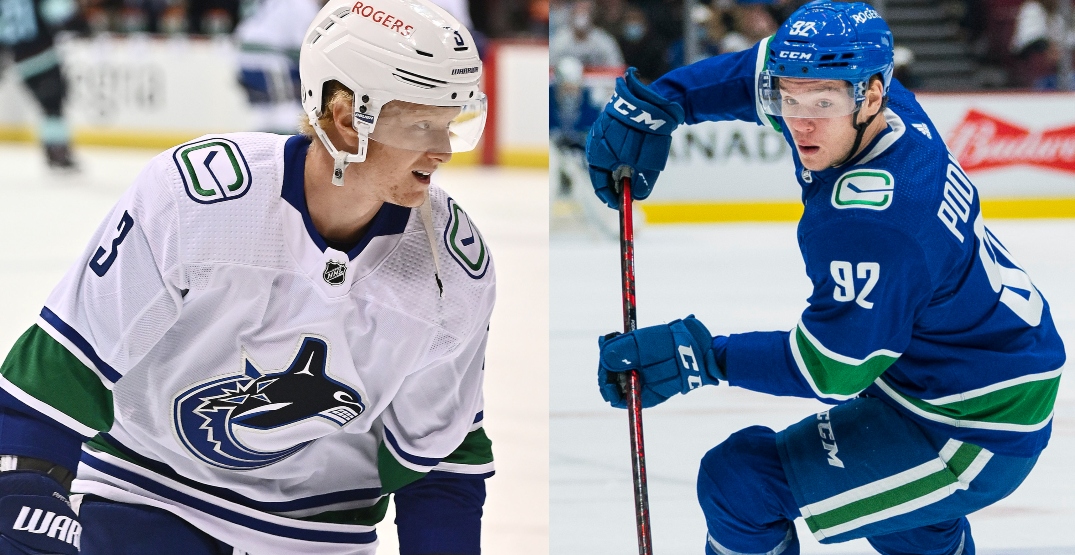 Just two preseason games remain for the Canucks before the games start counting for real next week. Expect Travis Green to ice a much more representative lineup Thursday and Saturday than the one that played against the Seattle Kraken on Tuesday, with Elias Pettersson and Quinn Hughes both likely suiting up.

Because so many bodies have been missing throughout preseason, it’s been hard to get a good read on who will make the team, though clearly Rathbone and Podkolzin are being given every opportunity.

The pressure was on Podkolzin heading into Tuesday night’s game, and the 20-year-old Russian delivered — albeit without getting his name on the score sheet.

Podkolzin had three shots on goal and four hits in 14:29 of ice time against Seattle, but it was this power move that nearly resulted in a goal that had everyone buzzing.

I'm tellin ya. If Podkolzin scores here? Crowd in Rogers Arena explodes so loud that you can hear it in Moscow.

Green said he thought Tuesday’s performance was Podkolzin’s best so far. The Canucks coach said he spoke to Podkolzin in the morning, as he thought he may be overthinking things.

“His pace was higher. He got his feet moving tonight. He was physical,” Green said after the game. “We talked about that this morning. Play with confidence, play fast. Don’t worry about the rest.”

Podkolzin played his first two games of preseason on a line with J.T. Miller and Conor Garland, but appeared to be demoted against Winnipeg on Sunday. He played just 10:07 of that game, on a line with Carson Focht and Will Lockwood, and was relatively unnoticeable. Podkolzin’s line was also on the ice for both Jets goals.

Green clarified after practice on Tuesday that he wanted to see Podkolzin in a “fourth-line role,” for that game. The young Russian played with Justin Dowling and Matthew Highmore against Seattle. At practice on Wednesday morning, he was on the third line, with Miller and Nic Petan, according to Thomas Drance of The Athletic.

There are still a lot of moving parts at forward, though it appears that other players on the bubble include Matthew Highmore, Zack MacEwen, Phil Di Giuseppe, Justin Dowling, Nic Petan, Alex Chiasson, and Will Lockwood.

Including Podkolzin, that makes eight forwards battling for 5-6 spots on the opening night roster.

Based on their usage thus far, it would seem likely that Lockwood and MacEwen will be heading to Abbotsford.

As for Rathbone, he has shown well in the battle to claim a spot on the left side of the third defence pairing. The dynamic 22-year-old defenceman has two points in five preseason games, and certainly doesn’t look out of place.

Rathbone came as close to anyone on the Canucks to scoring against the Kraken, as his first period slap shot hit the post.

He’s one of Vancouver’s best six defencemen, but the question still remains if he’s the best fit for the third pair.

Given that Rathbone is unlikely to get many power play minutes on a team that already has Quinn Hughes and Oliver Ekman-Larsson, he has to prove that he can handle things adequately in the defensive end of the ice. Add in the fact that Rathbone can be sent to the AHL without waivers, and he could be Abbotsford-bound.

Olli Juolevi and Brad Hunt are also options for the third pairing, if Green elects to send Rathbone down.

“They all bring something different to the table,” Green said after Tuesday’s practice. “Jack’s a little bit more of a highlight reel kind of player than maybe the other two. But there’s also the other side of it with Jack that we’re trying to fast-track him. At the end of the day it’s probably going to be a hard decision to make… He’s a good young player. We like him a lot. We’re playing him a lot for a reason. We’ll see where it ends up.”