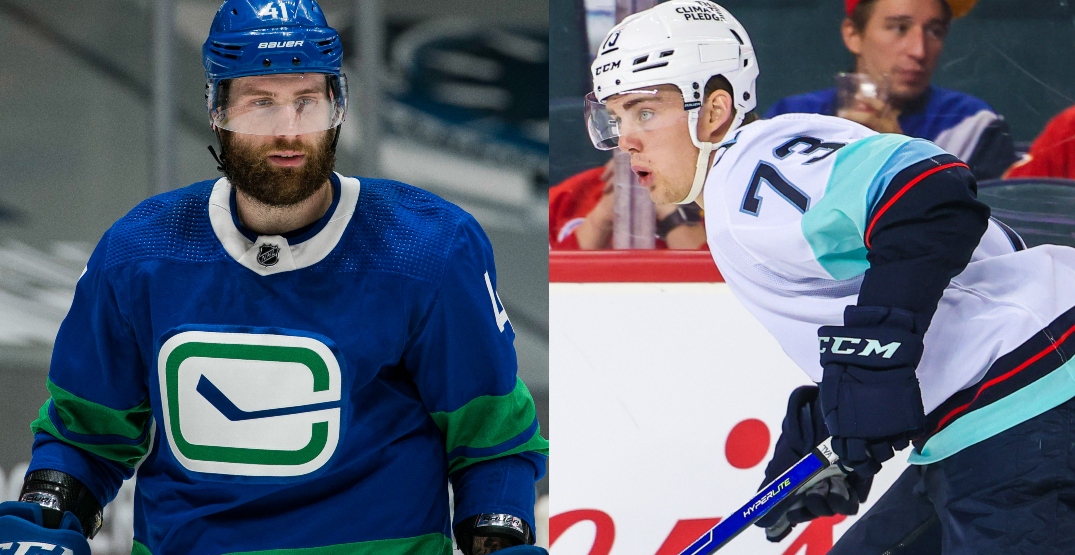 A pair of former Vancouver Canucks second-round picks are on waivers today.

Jonah Gadjovich and Kole Lind, who the Canucks picked 55th and 33rd overall respectively in the 2017 NHL Draft, can be had for free by any team in the league. This is the first season that both players are waiver-eligible, as they’re each beginning their fourth professional seasons.

The Canucks have also announced that 2021 second-round pick Danila Klimovich has been loaned to the Abbotsford Canucks. Vancouver had the option of sending the 18-year-old Belarusian winger to the QMJHL, but must have seen enough to believe he’s ready for pro hockey at the AHL level.

Gadjovich had a relatively impressive showing in preseason, scoring a goal and an assist in two games. The 22-year-old noticeably improved his foot speed, which was always the knock on the 6-foot-2, 209-pound power forward. The Whitby, Ontario, native had an impressive year in Utica last season, scoring 18 points in 19 games, and earned his first-career NHL call-up, playing one game with the Canucks.

If he goes unclaimed, he’ll report to Abbotsford, and will be a call-up option when injuries hit Vancouver.

Lind, meanwhile, was always going to have trouble cracking a very deep Seattle Kraken forward group. The 22-year-old was who Seattle picked from Vancouver in the expansion draft in July, after appearing in seven games with the Canucks last season.

The Canucks could put a claim in for Lind, if they think he would be a fit on their NHL roster. With Brandon Sutter and Tyler Motte set to miss the start of the season, GM Jim Benning might be active on the waiver wire, though Lind hasn’t exactly showcased himself well. Lind didn’t score a single point in seven games with the Canucks last season, and didn’t get on the score sheet in four preseason games with the Kraken either.

Many players were put on waivers today, as TVA’s Renaud Lavoie illustrates below. Teams are paring down their rosters ahead of the start of the NHL regular season next week. With all due respect to former Canucks defenceman Adam Clendening, there aren’t a lot of other notable players on today’s list. The time to put in a claim is likely a few days away, when teams make their final cuts.