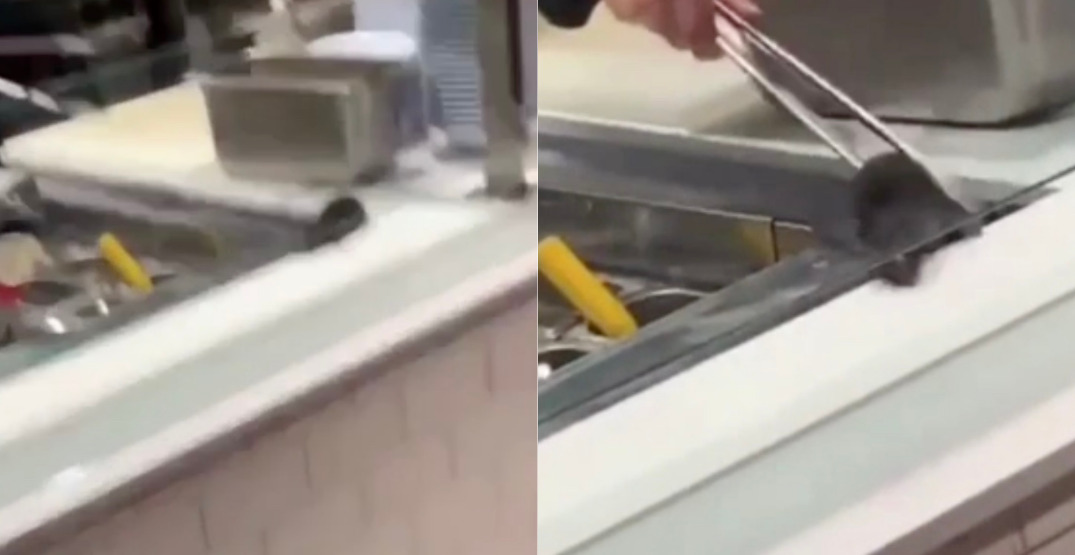 A video making the rounds on the UBC subreddit yesterday shows an employee handling a rat behind the buffet at the University of British Columbia Open Kitchen cafeteria.

Someone took the video on a cell phone, showing a rat attempting to climb into one of the food areas before the employee behind the bar uses tongs to get rid of it.

The video is only four seconds long and is captioned with, “Ummmm maybe no dinner tonight.”

“That technique shows that this is not the first time it happened. Yikes,” reads one of the comments on the Reddit post.

Open Kitchen is located on 6363 Agronomy Road, at the Orchards Commons Residence.

“From international comfort foods to plant-forward entrées and more, Open Kitchen represents the best of Vancouver’s diverse culinary scene. Keep an eye out for house-made butter chicken, awesome grilled cheese sandwiches and our beloved vegetarian southwest bowl,” reads a statement from their website.

In a statement to Daily Hive, Director of Food Services Colin Moore said UBC was aware of the situation.

“The grill station was closed immediately following the incident, all food at the station was discarded and a thorough cleaning and sanitation occurred. UBC Food Services is committed to providing clean and high-quality services and are working actively with our pest control partner to address the situation.”

He added that employees have also have been reminded about proper sanitation measures.

“Inspections are conducted regularly and when complaints are received. Each visit generates an inspection report that is provided to the operator to either confirm they are compliant with regulations or lists deficiencies that need to be addressed.”

VCH also directed Daily Hive to their public inspection reports, and since October 2016, Open Kitchen has had 10 critical infractions.

“Critical infraction is considered to be an infraction which is more likely to contribute to illness and/or injury or one which could have an immediate impact on the safe and sanitary operation of the food premises unless corrected,” reads a disclaimer on the inspection page.

Their last critical infraction was in October 2021, with none of the reports mentioning rodents or pests.