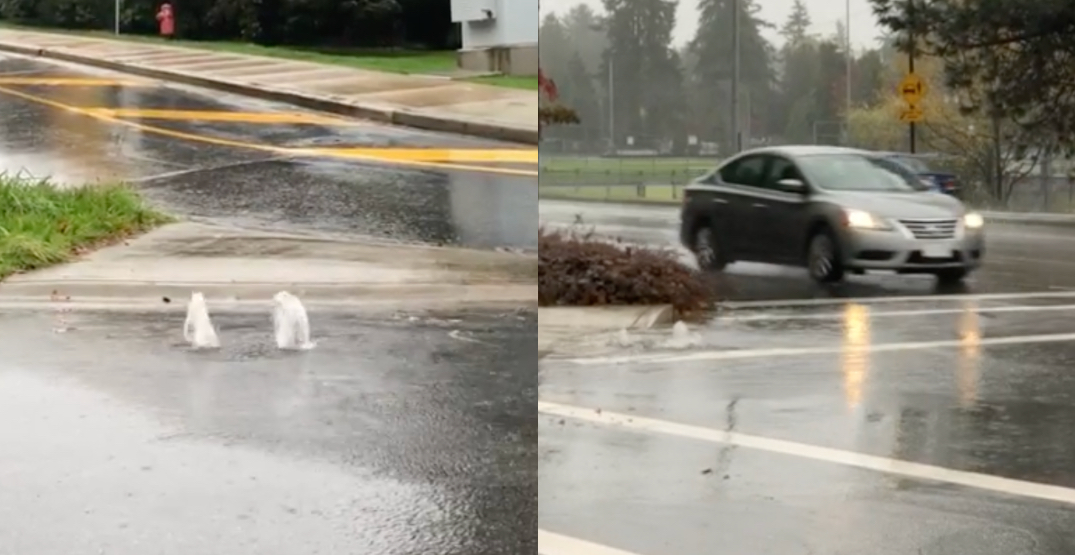 Vancouver’s no stranger to a bit of rain, but extended periods of intense rain have left parts of the city washed out.

On Saturday, October 16, Environment Canada issued another rainfall warning for Metro Vancouver. According to the warning, rain will continue to fall all day on Saturday reaching an additional 40 to 60 mm of rainfall following heavy rain on Friday.

The warning remarked that an Atmospheric River flowing off of the Pacific Ocean would bring more rain and snow melt would add to the runoff, swelling local streams and creating localized flooding. BC issued a flood watch for the region, too.

They warned that heavy downpours can cause flash floods and water pooled on roads, so stay away from washouts and look out for localized flooding in low-lying areas.

In West Vancouver, the intersection of Marine and 13th had a beautiful new fountain repurposed out of a manhole.

In Fairview, the steps at the L’École Bilingue school turned into a gentle waterfall.

Twitter users were sharing snippets of their corner of Metro Vancouver similarly transformed by the rain.

I don’t want to hear any stories of people having to be rescued from #northvan rivers/creeks this weekend.

This is Lynn Creek at the Main st overpass. #bcstorm #besafe pic.twitter.com/jty9gDLp0Z

You can share yours and report extreme weather with the #BCStorm hashtag.