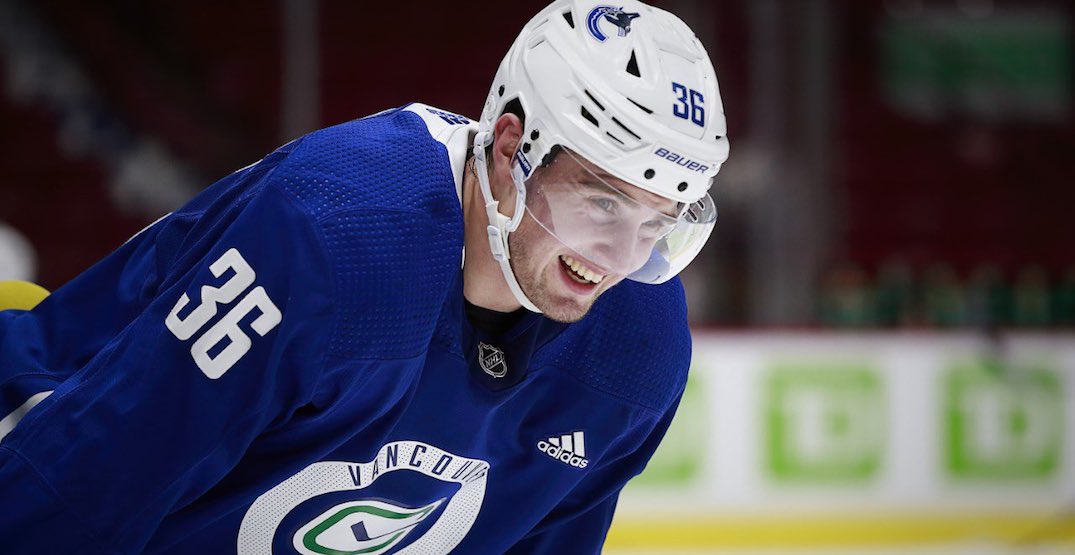 On Day 6 of training camp, it’s clear who the most talked about Canuck is.

It’s not any of the star players, like Elias Pettersson or Quinn Hughes. It’s not Jake Virtanen, who always seems to be a topic of conversation in camp. It’s not bubbly newcomer Nate Schmidt, nor is it either goaltender battling for the No. 1 job.

The most talked-about player, without a doubt, is rookie Nils Hoglander, who appears to be on track for a spot in the opening-night lineup.

Lined up with Bo Horvat and Tanner Pearson all week, the 20-year-old Swede has been put into a position to succeed by head coach Travis Green. The Canucks’ second-round pick in 2019 has passed every test so far, impressing in Wednesday’s scrimmage, which included scoring a goal and an assist during the game.

A wide-eyed rookie at this stage of his career, Hoglander is a man of few words when speaking to the media, which is understandable given he’s still perfecting the English language and getting used to his surroundings in a new country.

Hoglander admitted he’s been a “little bit” nervous this week, but added that he prefers the smaller North American ice to the bigger rinks in Europe.

Famous for scoring goals with a lacrosse-style move from behind the net, he shrugged off a question about it today, saying, “I think that most players can do that,” and adding that “it’s not as hard as it looks.”

Don’t know if I buy that, but Hoglander is certainly making it look easy thus far.

Nils Hoglander dangles through a defenders legs on his first shift of scrimmage. pic.twitter.com/v3Tndv8azN

Hoglander has a leg up on his teammates right now, having played 23 games in the Swedish Hockey League, scoring 14 points (5-9-14) for Rogle. But the NHL is a step up from the SHL.

The Canucks have just one more scrimmage set for Saturday night and a practice on Sunday. The opening-night lineup should be picked by Monday, a scheduled day off, before the team leaves for Edmonton on Tuesday.

“I think he is,” said Horvat. “He’s got tremendous skill and speed.”

“We want to build chemistry, and hopefully we can stay together for a long time, but I feel he’s ready to go.”

Hoglander’s skill has never been in question, but conventional wisdom was that he would need time in the AHL first given his age and size. But while Hoglander is only 5-foot-9, he’s somewhat stocky at 185 pounds. That may help him at the NHL level, particularly on a line that plays tough minutes, like Horvat’s.

“He’s just a smart player and his work ethic I think is the biggest thing I noticed,” said the Canucks captain. “Not only does he have skill and speed, but I think his smarts and his willingness to get places and do the dirty work too, I think is a testament [to] his personality, his character. He’s obviously hasn’t played NHL games so it’s tough to know what it’s going to be like, but I think he’s going to handle himself really well.”

Green’s choice to play Hoglander on Horvat’s line has to be considered a surprise, given the Canucks head coach’s tendency to prefer a defensively-responsible player in that role. It’s why Loui Eriksson played multiple games in that spot during the playoffs and why Virtanen was thought to be a less-than-ideal winger for Horvat.

Green admitted that defensive play is something he’s concerned about, though that’s hard to get a read on in practice. But with no preseason games due to the pandemic, it’s all he’s got to go on.

“I’d be lying if I didn’t say [I was concerned about] how he’s going to handle that,” said Green. “That’s part of the big adjustment for rookie players in the NHL is your attention to detail.”

“You know, even strength, going up against better players… we’re going to have to figure out if he’s ready for that or not, we’re just taking it day-by-day with him, trying to teach him.”

With that said, Green had no shortage of positive things to say about the youngster.

“He’s quick, he’s good with the puck and he makes plays… He looks like he’s confident enough to just play his game.”

“He’s very tenacious… He’s not afraid to go to a hard area.”

Nils Hoglander is doing a lot of good tonight. Here he is stealing the puck from Elias Pettersson. pic.twitter.com/mh7J0RxLSd

Furthermore, Green spoke about his intelligence and how coachable he is — something that will help Hoglander get more rope from the coach as he figures out the NHL.

Barring any unforeseen circumstances between now and Wednesday, the question now seems not whether Hoglander will be in the lineup, but how long Green gives him on Horvat’s line.