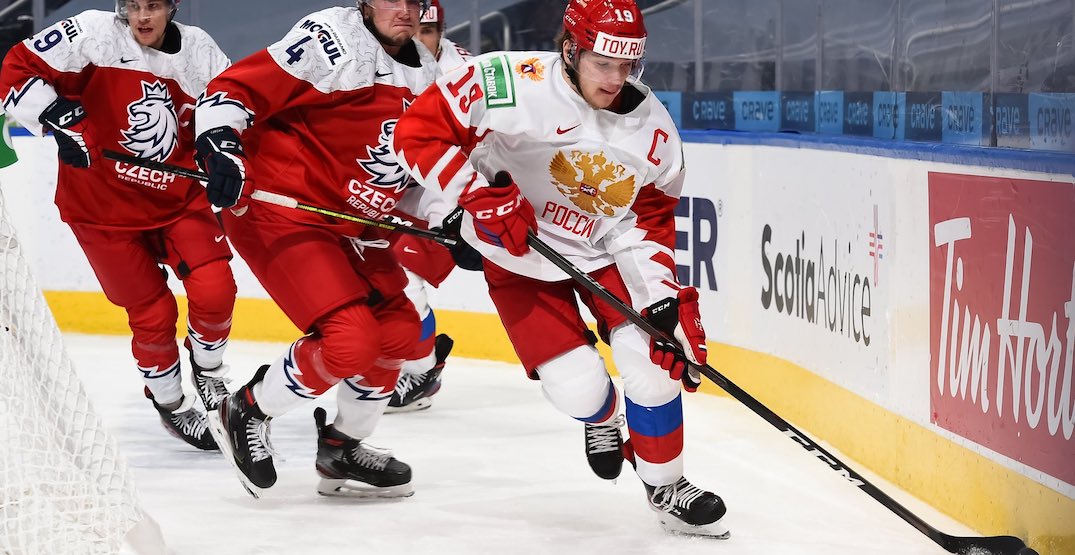 Canucks fans are becoming accustomed to the tug-o-war in response to Vasily Podkolzin’s counting stats.

Some see a player who impacts the game in many positive facets with translatable skills. Others see someone who fails to produce enough to warrant excitement. To be honest, both sides have valid points.

In the past, the 19-year-old has made a habit of dominating against his age group while struggling to parlay those stretches into sustained offence at the professional level.

Deployment has been an obvious issue, however, his terrific early-season play at the men’s level Karjala Cup only further fanned the expectations ahead of the World Junior Championships in Edmonton.

Vasily Podkolzin with the nasty shootout winner for Russia at the Karjala Cup this morning #Canucks . pic.twitter.com/N5nd6hkQxh

In the end, the production did not live up to those expectations. However, we need to delve deeper to truly assess the Canucks prospects’ impact at the U20 event.

The 6-foot-1, 205-pound right-winger failed to lead his Russian squad to a medal at the World Juniors. A decisive defeat at the hands of the Canadians in the semi-final paved the way for a nail-biting loss to Finland in the Bronze medal contest.

Podkolzin concluded the event with four points in seven games — good for a share of 36th place overall in the tournament. That mark was tied with such offensive juggernauts as American defenceman, Drew Helleson and draft-eligible and Finnish third liner, Samuel Helenius.

However, throughout the tournament, the 10th overall selection from 2019 was an advanced stats darling.

Vasily Podkolzin was a possession madman against the Germans.

According to stats compiled by Elite Prospects’ Mitch Brown, Podkolzin’s expected primary assists rate at even strength was right near the tournament lead. This was confirmed through the eye-test as time after time, the power winger fed his linemates pro-level, high-danger passes only to see them whiffed on.

Those passes will be more easily handled by his future NHL teammates. That alone should help swell the diminished point return we’ve become accustomed to seeing. That future, as we found out last week, is not so far off either.

“Vasily Podkolzin was a good captain for us, he motivated us and kept us going,” said Zakhar Bardakov, a teammate of Podkolzin’s at the World Juniors. “Unfortunately, we couldn’t follow his words of advice. We let him down… We didn’t crash the net enough. Vasily did that, but we didn’t.”

Team Russia head coach Igor Larionov used Podkolzin in every role imaginable at the World Juniors. He was a staple on the first line and first power-play unit. During man-advantage time he worked a great deal in the net-front position — mostly unsuccessfully thanks to a poor overall scheme, but he also saw time in the bumper spot and along the half-wall.

He also saw action killing penalties when the games had become more meaningful and the extra minutes attached were justifiable.

At the NHL level, fans can expect similar roles for Podkolzin. As a physical, tenacious player, Podkolzin feeds off of initiating contact, forcing his way into the blue paint and stripping the opposition of the puck. He very seldom is responsible for a turnover and can be ferocious when in pursuit of loose pucks. He should become a very effective penalty-killer.

If this sounds familiar to you, don’t be surprised. He has a lot of the same traits that Canucks captain Bo Horvat possesses, although he’s quite likely to be a stronger defensive player overall. Those two have all the makings of a heavy, matchup pair that can hurt teams at both ends of the rink.

Podkolzin’s production is unlikely to rival front-line players or even some of those selected behind him in 2019. However, his game is tailor-made for the tight-checking, heavy-style of the NHL playoffs. Podkolzin’s upside is that of a player you need to draft to obtain because they’re so rare and in demand.

Canucks fans will have to wait a bit longer to see him in action, but the excitement should remain despite his numbers on the big stage not living up to expectations.

There’s been a lot of discussion surrounding the NHL availability of Podkolzin for this season. During the tournament, Canucks GM Jim Benning confirmed that Podkolzin’s KHL contract expires on April 30, at which time he expects to sign him and immediately insert him into the big league lineup.

Traditionally, the end of April is smack dab in the middle of the playoffs. However, the late-starting and truncated 2020-21 season will look differently. The playoffs are set to begin on May 11, allowing Podkolzin just shy of two weeks to settle in. Now, we must allow for some travel time and a two-week quarantine is expected. So while the team may be welcoming a young talent into their lineup, it’s unlikely Podkolzin sees any regular-season contests.